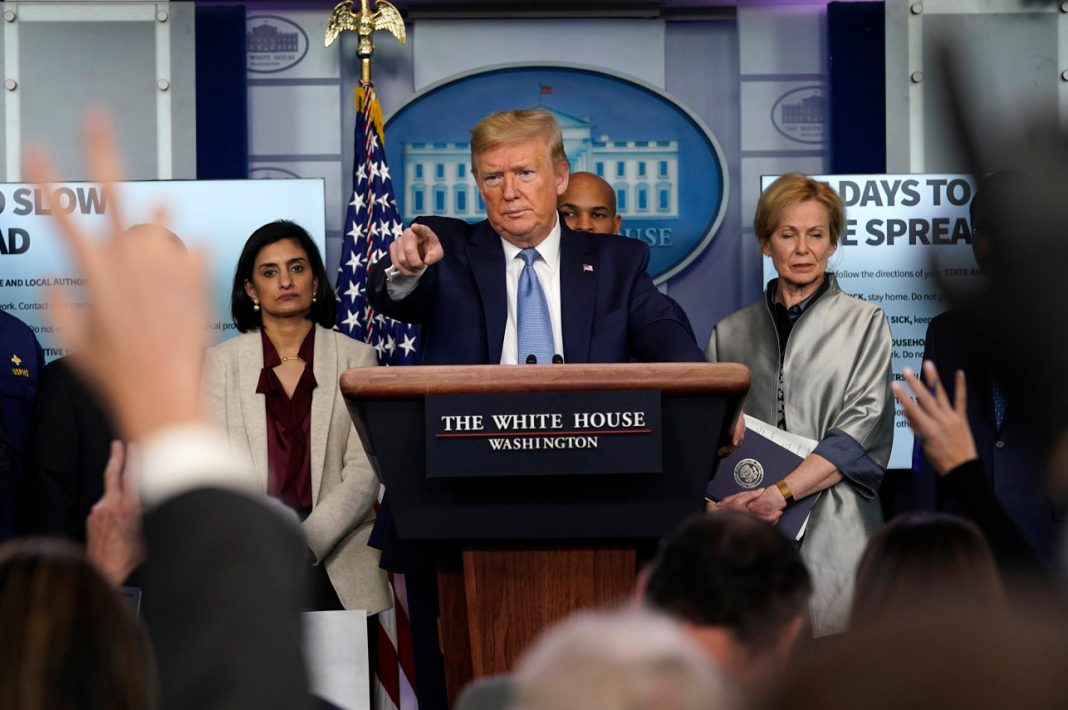 What happens when the supposed dictator won’t dictate?

This is the conundrum confronted by the harshest critics of President Trump, who have gone from warning he is a budding despot to complaining he hasn’t done enough to impose his will during the coronavirus crisis.

They can’t believe that he didn’t urge sports leagues to cancel their seasons, call for school systems to close or tell bars and restaurants to shutter before this wave of closures began.

As a New York Times report put it, Trump “has essentially become a bystander as school superintendents, sports commissioners, college presidents, governors and business owners across the country take it upon themselves to shut down much of American life.”

Trump declared an emergency last week and has now issued national guidelines against gatherings of more than 10 people, but his initial instinct was to urge people to stay calm and carry on.

The reason that Trump’s conduct in this crisis hasn’t tracked with the “incipient-fascist” line of attack is that this criticism never made any sense.

The problem with Trump’s mode of governance isn’t that he is a would-be authoritarian. Rather, he has a highly personal view of the presidency and an abiding belief that he can talk his way out of any difficulty — including, initially, a public-health crisis not susceptible to spin.

This is a deeply flawed way of approaching his responsibilities that contributed to early stumbles in the coronavirus response, but it doesn’t make him a falangist.

What we are likely to find is that Trump ends up leading a characteristically American effort against the outbreak. As Yuval Levin of the American Enterprise Institute points out, we usually fumble around in the early stages of a national crisis before bringing to bear massive resources to wrestle it to the ground.

This has certainly been the pattern in our military conflicts. We did much to precipitate the Mexican-American War and yet were still woefully unprepared at the outset. At the beginning of the Civil War, the Union Army had only 16,000 men — before enlisting more than 2 million. The United States had an army smaller than Portugal’s at the inception of World War II, then built a vast military machine of more than 12 million men by 1945 and pumped out a B-24 once-an-hour from a Detroit auto plant and millions of tons of artillery ammunition.

For better or worse, the Great Depression prompted the creation of the most far-reaching economic programs in our history after a period of passivity and drift.

We responded to the perceived crisis of the Soviet Sputnik launch with the Apollo program that soaked up 4 percent of GDP. Hurricane Katrina overwhelmed New Orleans and initially FEMA, ­before we put an army general in charge of the relief effort.

The initial indications of a ­financial crisis in 2008 were greeted with denial and half-measures. Then, the federal government responded with a historic bailout of the banks and the Federal Reserve undertook an ­unprecedented program to pump liquidity into the economy.

The outlines of a similar ­response are already evident to the coronavirus. The move from relative normality to large parts of the country being shut down was remarkably swift — it happened in the space of about a week.

Testing has been slow to come online, but is ramping up now. If hospitals are overwhelmed, we will see the rapid retrofitting of additional space. The Federal Reserve and the federal government are embarking on major stimulus and relief programs.

Such is our robust, multilayered society and system of government that much of this doesn’t depend on the president, let alone a dictator.

U.S. and EU should put aside their Boeing-Airbus feud and join...