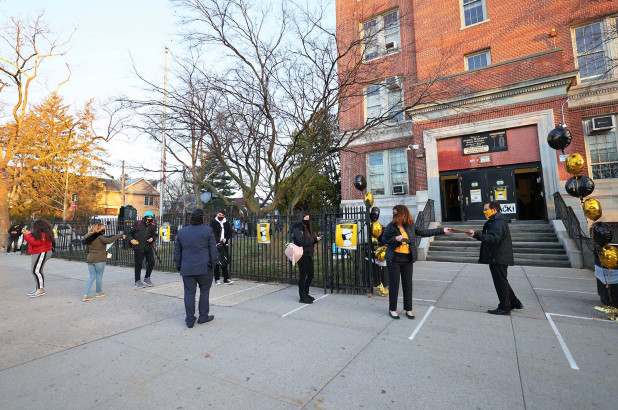 Another day, another Gotham schooling disaster.

Parents were overjoyed last week when the city Department of Education finally ­announced changes aimed at ­restoring full-time, in-person schooling in New York. This, even though the Centers for Disease Control and Prevention’s guidance reducing social-distancing ­require­ments had come a month earlier — and though many districts across the country had ­reopened even before the new CDC guidance was handed down.

Our education elite, by comparison to the rest of the nation and developed world, moved at the pace of a turtle crawling through molasses. Still, the turtle’s slow movements cheered us.

Then, on Friday, that joy came to an abrupt end: Schools sent out e-mails ­informing families that the move to reduce distancing from six feet to three is on pause.

The DOE had e-mailed principals instructing them to await ­“additional guidance and next steps” and, in the meanwhile, to “continue to use physical distance protocols of six feet.”

It’s amazing, isn’t it? The city implemented the original, six-foot guideline as an ironclad law, as if it were handed down by the ­Almighty himself at Sinai, but the update to three feet can seemingly be stalled indefinitely.

Why was the DOE once again putting kids last? Blame the powerful and devious United Federation of Teachers. One principal at an ­elementary school in Brooklyn said as much in her e-mail to parents: “We believe this may be because UFT and DOE have not reached an agreement on the distancing change. We cannot move forward until this is resolved.”

UFT honcho Michael Mulgrew had previously called the guideline change “strange” and vowed that his union would have its own independent medical experts evaluate it. You see, it’s important to listen to the science — that is, except when science disappoints unions. It’s a bad joke.

When, last spring, I first started writing about opening the schools, I was agitating for school districts across the country to do the right thing and get their kids back in classrooms. But now, my columns aim at a minority of districts around the country.

Like the Big Apple, other areas that still have little to no in-person schooling are either big cities or the suburbs immediately abutting them, all deep-blue Democrats ­politically, all in the grip of anti-science teachers unions.

People elsewhere marvel at these places: “You still don’t have in-person school?” Yet some New Yorkers have learned to accept our elementary kids going to school twice a week (three if they’re lucky!) as some sort of ­accomplishment. They have ­acquiesced to having older kids’ return to physical classrooms — only to use Zoom on laptops and be taught ­remotely by teachers lounging in their hammocks. Some New Jersey towns celebrate having in-person school every day, but only until noon.

These aren’t wins. These are ­really losses.

Kids attending these sometimes schools might be better off than the truly unfortunate ones who have spent the last 13 months distracted and untaught online — what remote learning amounts to. But the sometime-schooling kids will have their lunch eaten by kids who attended normal, full-time school.

Parents have to stop settling for these crumbs. Your kids are being left behind.

Demand your schools open full-time, immediately. New York City spends more than $25,000 per pupil in public schools. Suburban New Jersey schools spend around $22,000. It is unacceptable that these places remain closed 13 months into the pandemic.

These schools are also set to get an avalanche of cash from the Biden administration. This is not the era of: “It will be a great day when our schools get all the money they need, and the Air Force has to hold a bake sale to buy a bomber” — schools are flush with federal dollars. If they aren’t open today, it’s because they don’t want to be. Kids last, again.