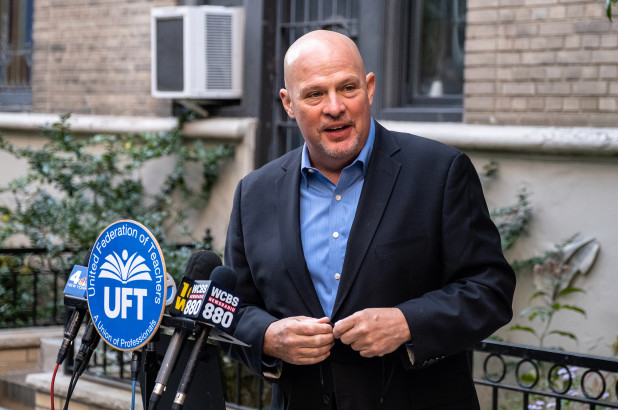 Excuse me, but who died and made United Federation of Teachers honcho Mike Mulgrew both supreme leader and chief scientist of New York?

Last week, the Centers for Disease Control and Prevention ­finally admitted what we parents knew all along: namely, that there is absolutely no reason to keep kids six feet apart in school. Most European schools dropped the ­social-distance requirement in the fall (and by the way, their kids are also largely mask-less under 12 years old).

In America, meanwhile, CDC guidelines specified six feet of distance. Schools that tried to adhere to this found that, of course, they didn’t have enough space for all kids, and so in-person schooling could only exist on a provisional, part-time basis; the result has been disastrous.

It has been more than a year since public schools closed in Gotham, and they have yet to ­reopen in a meaningful way. Most elementary kids don’t attend five days a week. Middle schoolers have even fewer days. The few high-schoolers who “attend” school sit in front of laptops, while their teachers zoom in from the comfort of homes.

Mulgrew, the UFT boss, ­described the new CDC guidelines as “strange.” What’s strange — and enraging — is how unions refuse to accept the scientific evidence in their determination to avoid, you know, working.

“We’re still trying to figure out how to do it,” Mulgrew said. “It’s not easy to figure out three feet in a classroom and six feet everywhere else in the building.”

If we had a political class with even the semblance of a backbone, our leaders might have responded: “What the hell are you talking about?” and maybe added: “Get back to work or get fired.”

Why would kids need to be six feet apart elsewhere in the building when researchers have established that three feet suffice? Mulgrew added that his union listens to its own, independent doctors, not the CDC. How nice for them: Can the rest of us also take advice from independent doctors?

The anti-science union has been at the forefront of ruining schooling in the Big Apple, far beyond the distancing rules. It was the ­union, after all, that extracted a moronic 3-percent-positivity trigger for shuttering schools — ­including in Manhattan, where the healthy and wealthy love to test frequently.

The World Health Organization and other bodies have rejected the 3-percent threshold as too low, but in New York, Mulgrew is the highest authority on such matters.

In Gotham, moreover, two unrelated cases among the staff or student body in a school building in seven days immediately results in up-to-10-day closures. The rule doesn’t consider how many people are in the building. It doesn’t matter if a school serves 20 or 2,000 kids.

Coupled with random testing, schools are constantly closing for two-week stretches thanks to this rule. As Gothamist reported, “As of March 17th, 920 classrooms were closed, as were 200 school buildings — some for 24 hours, most for 10 days or more.”

City Councilman Brad Lander has launched a petition to end the two-case rule, but who knows if Mayor de Blasio will listen. And if he does, how much power does Hizzoner hold anyway? Maybe Lander should direct his petition to Mike Mulgrew. The supreme leader — surprise! — wants to keep the two-case rule.

Many anticipated that after President Biden made it rain money on the schools, teachers would have to return to work, in school buildings, doing actual teaching of actual kids. But leaders like Mulgrew are drunk with power and in no rush to make that happen.

Mulgrew holds the future of our children in his hands, and he really doesn’t care if they succeed or retain their sanity.

Every comment Mulgrew makes goes a long way toward shattering the faith parents have in the public-school system. Our pusillanimous politicians have let the union lead the way. We have thrown out science and allowed a selfish special interest union to manipulate and distort what safety means.

That rumbling noise you hear is the sound of parents fleeing the broken system Mulgrew protects and politicians are too weak to fix.

Congress needs to send the MTA another $4B in aid during...