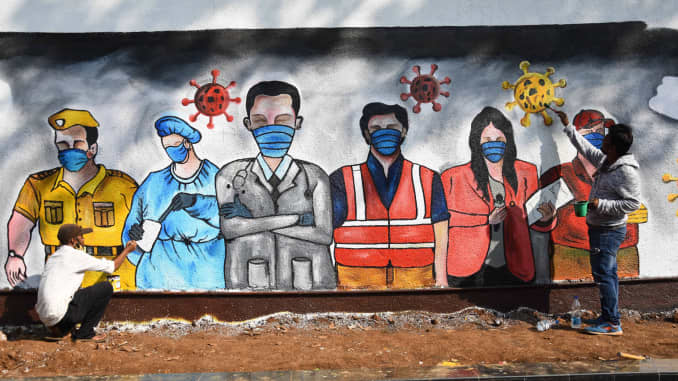 The Covid-19 pandemic has sent the global economy into one of its worst recessions ever, and it isn’t yet clear when a full recovery will be in place.

Recent progress on coronavirus vaccines has brightened the economic outlook, but some economists said a potentially slow rollout of vaccines across developing economies could hamper the return of activity to pre-pandemic levels.

Even among advanced economies, renewed lockdowns in Europe in a bid to stave off a resurgence in infections could push back economic recovery, according to economists.

“The vaccine discovery is a shot in the arm, but not until 2022,” Citi economists said in a report in early December. Still, there will be “clear improvement” in the global economy in 2021, partly because “it’s not hard to be better than 2020,” they said.

The rapid spread of Covid — which was first detected in China — forced many countries into months of lockdown in 2020 that markedly reduced economic activity.

As a result, gross domestic product — the broadest measure of activity — plunged to record lows across many economies.

The International Monetary Fund forecast the global economy could shrink 4.4% this year, before bouncing back to 5.2% growth in 2021. The IMF said in October the world economy has started to recover, but warned the return to pre-pandemic levels will be “long, uneven, and uncertain.”

One main feature of coronavirus lockdowns around the world is the complete or partial closure of borders, which brought much of international travel to a halt.

As of Nov. 1, more than 150 countries and territories had eased Covid-related travel restrictions, according to the United Nations World Tourism Organization.

But many restrictions remain in place to limit movements across the borders, said UNWTO. That include:

A major consequence of the pandemic-induced economic slump is an increase in job losses globally.

The Organisation for Economic Co-operation and Development, an intergovernmental entity, said that in some countries, the early effects of Covid-19 on labor markets were “ten times larger than that observed in the first months of the 2008 global financial crisis.”

“Vulnerable workers are bearing the brunt of the crisis. Low-paid workers have been key to ensure the continuation of essential services during lockdowns, often at a substantial risk of exposing themselves to the virus while working,” the OECD said in a report.

“They have also suffered greater job or income losses.”

Such staggering levels of spending have pushed global public debt to an all-time high — but governments should not withdraw fiscal support too soon, said the fund.

“With many workers still unemployed, small businesses struggling, and 80‑90 million people likely to fall into extreme poverty in 2020 as a result of the pandemic — even after additional social assistance — it is too early for governments to remove the exceptional support,” said IMF.

Central banks, too, have come in to support the economy by cutting interest rates — many to record-low levels — which will help governments to manage their debt.

The U.S. Federal Reserve, whose policy affects economies worldwide, slashed interest rates to near zero and committed to not raising them until inflation exceeds its 2% target.

Central banks in advanced economies — including the Fed and the European Central Bank — have also increased their asset purchases to inject more money into the financial system. That’s a move also adopted by an increasing number of central banks in emerging markets as they explore ways to support their respective economies hit hard by the pandemic.

ASIA ECONOMY Singapore sets aside over $8 billion in 2021 budget...