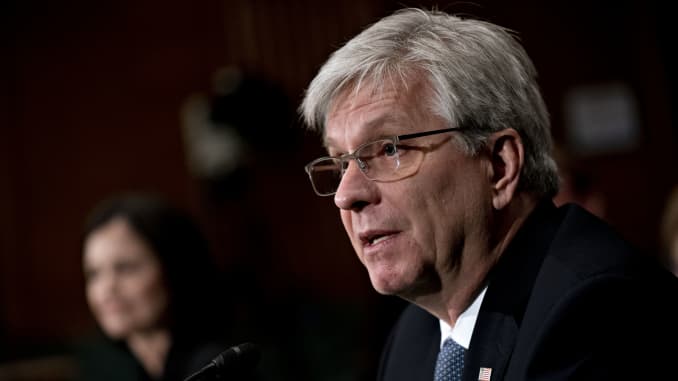 The Federal Reserve is not keeping monetary policy easy to enable the government to rung up debts and deficits, Fed Governor Christopher Waller said Monday.

Defending the Fed’s independence from the fiscal authorities in Congress, Waller rejected notions that the central bank is holding borrowing costs low to help service the debt or that it is conducting asset purchases to finance the debt-laden federal government.

“My goal today is to definitively put that narrative to rest. It is simply wrong,” Waller said in prepared remarks to the Peterson Institute for International Economics. “Monetary policy has not and will not be conducted for these purposes.”

As part of its Covid crisis response, the Fed cut short-term borrowing rates to near zero and has been buying at least $80 billion of Treasurys each month, along with $40 billion of mortgage-backed securities.

At the same time, total government debt has soared by $4.5 trillion, or nearly 20%, since early March 2020, and the deficit for fiscal 2020 was more than $3.1 trillion. The Congressional Budget Office has projected the fiscal 2021 shortfall to be $2.3 trillion, and that doesn’t include the nearly $1.9 trillion stimulus package approved recently.

Fed critics say the central bank has been charged with keeping rates low so the government can continue borrowing. Though Fed officials have largely applauded the aggressive fiscal policy, Waller said monetary policy is not set with keeping borrowing costs low in mind.

He further stressed the importance of Fed independence from Congress so monetary policy is not designed with political objectives in mind.

“There are sizable costs if cooperation turns into fiscal control,” Waller said.

“The Congress was fully aware of the potential misuse of monetary policy for political reasons, and it purposefully created the Federal Reserve as an independent central bank,” he added. “The design features of the Federal Reserve minimize political influence over monetary policy while still maintaining accountability to the Congress and to the electorate for its policy actions.”

Waller is the most recent addition to the board of governors, gaining confirmation in December after having been nominated by former President Donald Trump. These are his first public remarks.

Jobless claims were lower than expected but employment growth is still...