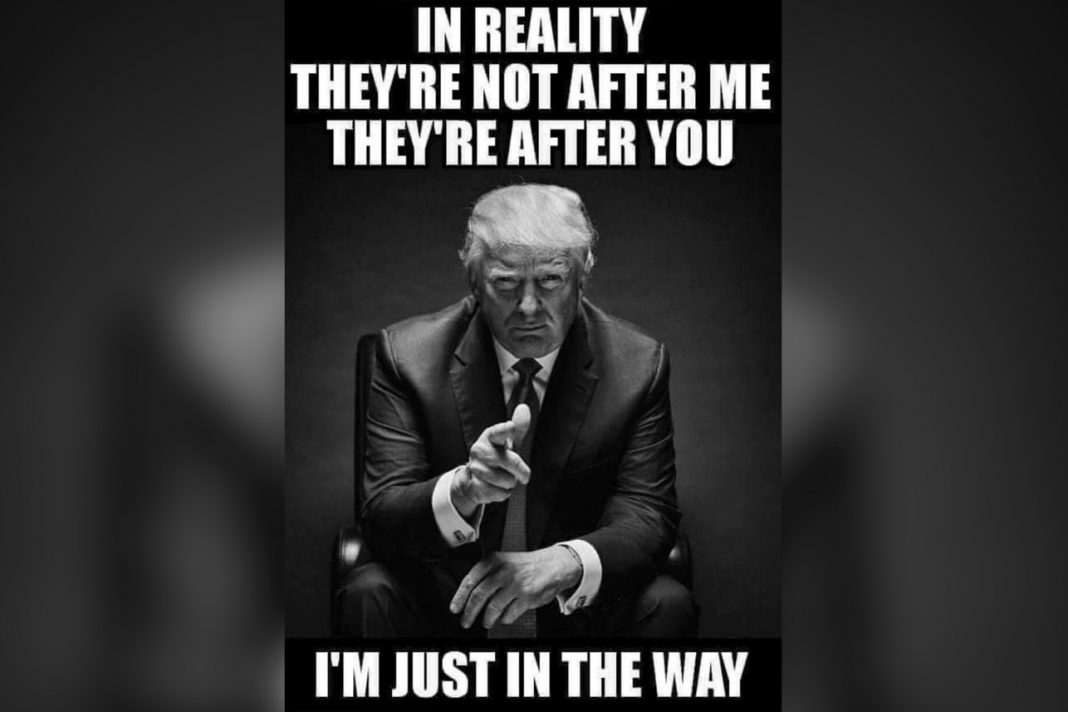 On its face, a tweet President Trump sent last week is fairly benign. It doesn’t mock anyone, isn’t personally nasty and hasn’t caused any hair-on-fire controversy.

Yet it is powerful in its own way, for it artfully sums up the Trump era from the perspective of the president and his supporters. With a likeness to the Uncle Sam “I want you” poster, the disrupter in chief reaffirms in 14 words the belief of Trump Nation that the political establishment, the media, the permanent bureaucracy and yes, the deep state, are trying to crush him and them.

The president tweeted the image the day House Democrats voted to impeach him, and hours after his raucous rally in Michigan that evening.

The tweet included no added comment because none was needed. The message is clear: I am all that stands between you and the barbarians at the gate. If I fall, you are next.

Critics regard it as fear-mongering, and there is no denying that the president wanted to rally his base, lest it be discouraged by the day’s events.

Yet Trump’s oblique reference to a weaponized and powerful adversary is hardly ­unfounded, with a partisan, flimsy impeachment the latest example. The tweet’s siren call to believers is a shorthand way of saying that impeachment is just a continuation of the endless attacks against us.

Indeed, his presidency effectively begins with a prophecy of those attacks, one that came 17 days before Trump took the oath.

“Let me tell you: You take on the intelligence community — they have six ways from Sunday at getting back at you,” Sen. Chuck Schumer said on MSNBC.

It was an incredible thing to say in a nation where the people are supposedly sovereign, but soon it would become clear that Schumer knew what he was talking about, which still raises questions.

How did he know the FBI, CIA and others were going after Trump?

Did he warn them against meddling in politics? Did he alert prosecutors?

If so, nobody did anything because it was quickly obvious that law enforcement and intelligence officials in the Obama administration were leaking secrets designed to embarrass the new president — and kill his administration in its infancy.

The effort never stopped, with impeachment launched when a man identified by the media as CIA officer Eric Ciaramella filed a complaint about Trump’s July 25 call with the president of Ukraine.

Most of the period between Schumer’s warning and the Ukraine complaint was dominated by the two-year slog of special counsel Robert Mueller. It, too, made lots of noise and the Democrat/media frenzy created the clear implication that Trump would be formally charged with helping Russia tip the 2016 election.

Of course, Mueller found no such evidence, but he still hurt the president.

The probe was a black cloud hanging over the White House during the 2018 midterm campaign, and thus likely played a role in Dems winning the House majority — the majority they would use to impeach the president.

Thus, Mueller’s team struck out legally, but helped Dems score big politically. So much for its integrity.

More recently, added confirmation that Schumer was right has come in spades. Thanks to reports from the Justice Department’s inspector general, we know there was rampant misconduct and political bias at Jim Comey’s FBI.

We learned through texts that top agent Peter Strzok, who said he could “smell” Trump voters in a Walmart, had exchanges with his office paramour about stopping Trump, including references to an “insurance policy” in case Trump won. J. Edgar Hoover would blush at the audacity.

A second probe scorched the FBI’s handling of the FISA applications to spy on Trump campaign associate Carter Page. Although the probe found no direct evidence that anti-Trump bias was a factor, it did reveal that all the omissions, failures and mistakes worked against Trump, with even exculpatory evidence against Page intentionally withheld.

Thankfully and finally, the fallout from those findings is picking up speed, with the top FISA judge questioning the FBI’s “candor” and saying the flawed submissions “calls into question whether information contained in other FBI applications is reliable.”

Even bigger fish could be on the grill in a separate probe. Other top officials in the Obama administration, CIA head John Brennan and Director of National Intelligence James Clapper, are reportedly under scrutiny by US Attorney John Durham, who is conducting a criminal investigation of the spying effort against Trump.

The New York Times reported that Durham is gathering Brennan’s emails and documents in a focus on his congressional testimony about the use of the Hillary Clinton-financed Steele dossier in the government finding that Russia tried to help Trump in 2016.

To understand the import of the investigation, it pays to recall that Brennan, Clapper, Comey and his former top deputy, Andrew McCabe, have for years appeared on hate-Trump TV to accuse him of treason and other crimes, as has Clinton.

None of those charges was true, but the endless attacks on Trump from former insiders are unprecedented, and reflect badly on the institutions they led and the government as a whole. All these false charges were amplified by a media that ignored basic fairness.

Attorney General Bill Barr offers the best overview of this unholy alliance, saying, “Our nation was turned on its head for three years based on a completely bogus narrative that was largely fanned and hyped by a completely irresponsible press.”

Barr also says the question of whether anti-Trump bias led to FBI misconduct is still open. He also says Durham’s probe will not be limited to that agency or even to the United States.

So Schumer’s warning hit the bull’s-eye — but uncharacteristically, he’s been shy about taking credit.

Is he afraid of the intelligence agencies, or is he OK with the officials playing politics because Trump was the target? If the latter, he joins a crowd who fancy themselves liberals of integrity, but who are comfortable with abuses of power and double standards against Trump.

Even impeachment was not the grand, noble process the Founders envisioned, despite Speaker Nancy Pelosi’s efforts to dress up a dirty trick. Under her, impeachment proved that the House, like the FBI, CIA and the media, has corrupted itself in a bid to destroy Trump and delegitimize his presidency.

In his bristling letter to Pelosi, Trump cited numerous examples where Dems talked of impeachment long before Ukraine, including a Washington Post story on Inauguration Day that said, “The Campaign to Impeach President Trump Has Begun.”

Trump also highlighted the quote that, for my money, is the matching bookend to Schumer’s “six ways from Sunday” prophecy. This one came from Rep. Al Green from Texas, who said last May he was “concerned if we don’t impeach this president, he will get reelected.”

Yes, you should plan on traveling to see family for Thanksgiving