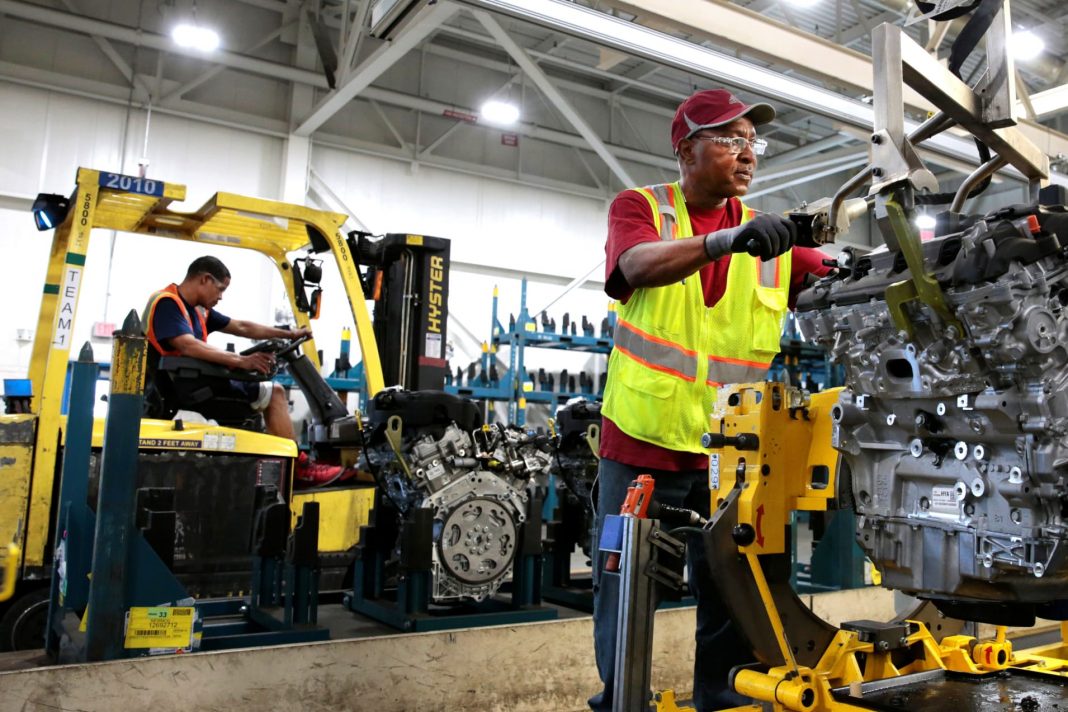 U.S. economic growth nudged up in the third quarter, the government confirmed on Friday, and there are signs the economy more or less maintained the moderate pace of expansion as the year ended, supported by a strong labor market.

Gross domestic product increased at a 2.1% annualized rate, the Commerce Department said in its third estimate of third-quarter GDP. That was unrevised from last month’s estimate. The economy grew at a 2.0% pace in the April-June period.

Despite the unrevised reading, which was in line with economists’ expectations, consumer spending was stronger than previously reported. There were also upgrades to business spending on nonresidential structures such as power infrastructure, which limited the drop in overall business investment. That offset downward revisions to investment in homebuilding and inventory accumulation. Imports, which are a drag to GDP growth, were higher than previously estimated.

When measured from the income side, the economy grew at a 2.1% rate in the last quarter, rather than the 2.4% pace estimated in November. Gross domestic income (GDI) increased at a rate of 0.9% in the second quarter.

The revision to the income side of the growth ledger reflected a downgrade to corporate profits.

They were in part held down by legal settlements with Facebook and Google. Profits increased at a 3.3% rate in the second quarter.

The average of GDP and GDI, also referred to as gross domestic output and considered a better measure of economic activity, increased at a 2.1% rate in the July-September period. That was down from the previously reported 2.3% pace and an acceleration from a 1.4% growth rate in the second quarter.

The economy appears to have maintained its moderate growth speed in the fourth quarter, with the lowest unemployment rate in nearly half a century supporting consumer spending. Recession fears, which gripped financial markets in the summer, have faded.

Manufacturing looks to be stabilizing as tensions in the 17-month trade war between the United States and China ease. A turnaround in manufacturing could, however, be delayed after Boeing announced on Monday it would suspend production of its best-selling 737 MAX jetliner in January as fallout from two fatal crashes of the now-grounded aircraft drags into 2020.

Growth estimates for the fourth quarter range from as low as a 1.3% rate to as high as a 2.3% pace. Though growth has been relatively strong, economists did not expect the economy to achieve the Trump administration’s 3.0% target this year.

The economy grew 2.6% in the first half. Growth has slowed from the 3.1% rate notched in the first three months of the year in part because of the U.S.-China trade war and as the stimulus from last year’s $1.5 trillion tax cut package fades.

Growth in consumer spending, which accounts for more than two-thirds of U.S. economic activity, was raised to a 3.2% rate in the third quarter from the previously reported 2.9% pace. Inventories rose at a $69.4 billion pace instead of the $79.8 billion rate reported last month.

Business investment dropped at a 2.3% rate in the third quarter, rather than contracting at a 2.7% pace as previously reported. Spending on nonresidential structures such as mining exploration, shafts and wells declined at a 9.9% rate instead of the previously reported 12.0% pace.

Growth in residential investment was lowered to a 4.6% rate from the 5.1% pace estimated last month. Government spending growth was raised to a 1.7% rate from a 1.6% pace.