GBPUSD managed to recover from local lows earlier this week, regaining the 1.31 figure. On Thursday, the pair retreated partially but still looks fairly robust. Earlier, cable rallied strongly on the back of upbeat economic data. According to CBI, quarterly business situation index arrived at +23 in January from -44 previously, to the strongest level since April 2014. A strong report helped to ease concerns over a possible rate cut by the Bank of England and thus lifted the pound. Also, traders trimmed rate cut bets after stronger-than-expected UK wage growth numbers.

On the other hand, market participants refrain from placing aggressive bullish bets amid the remaining worries about a hard Brexit by the end of this year. In other words, the Brexit factor continues to keep a lid on the UK currency despite better fundamentals and the improving political landscape in the country. Besides, the dollar stays afloat as investors are cautious amid the developments in Asia, where the spread of a dangerous virus hurts market sentiment, denting the outlook for the global economy. As long as these two factors persist, the bullish potential in GBPUSD will be limited.

Of note, the Bank of England policy meeting is scheduled for the next week, and it will be the main risk event for the pound in the near term. As traders have trimmed their bets on a rate cut recently, such a move will be an outright negative development for the cable. Still, the central bank will likely refrain from a rate cut, citing more political certainty following the December election coupled with more upbeat economic data. In this case, GBPUSD may jump above the 1.32 handle and probably even challenge local highs just below the 1.33 figure.

For now, the pair needs to confirm a recovery above 1.31 on a daily closing basis. Otherwise, the prices may retest the 1.3080 intermediate support area. The downside pressure may come from a potential dollar rally if the US manufacturing and service PMIs due later today surprise to the upside. 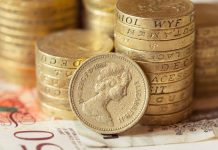