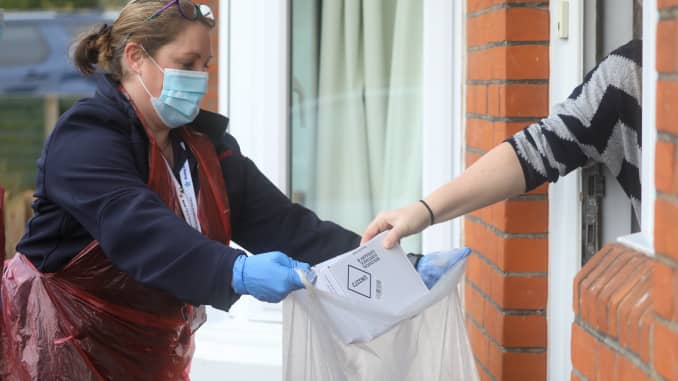 The U.K. is scrambling to contain the spread of additional mutations of the coronavirus, with the more worrying variant first discovered in South Africa seen to be spontaneously emerging in different parts of the country.

British Health Secretary Matt Hancock said the country had to “come down hard” on the South African variant after 105 cases were reported, and 11 of those cases had no links to international travel.

As such, the U.K. launched an enhanced testing program for around 80,000 people living in areas where pockets of cases with the mutation have been found. Tests are being offered door-to-door and positive cases will be then be assessed to see if they are caused by the South African variant.

People in those areas have been told to consider limiting the time they spend outside their homes as health authorities scramble to prevent the spread of yet another more infectious variant. One mutation, now known as the “British mutation,” has already become the dominant strain in many parts of the country.

At the start of the week, Public Health England published another technical briefing in which it warned that a handful of coronavirus cases of the variant first found in the U.K. had actually mutated further to include the E484K mutation, which was first seen in the variant from South Africa.

Mutations of any virus are normal; viruses mutate all the time. But experts and policy makers are concerned over mutations that allow the virus to spread far more quickly.

Vaccine makers have said there is little evidence to show that their shots will be ineffective against new variants, and say that they should be able to adapt their vaccines to new variants in a number of weeks, if necessary.

On Wednesday, British pharmaceutical GlaxoSmithKline and German biotech firm CureVac announced a 150 million euro ($180 million) deal to develop Covid vaccines that target several variants in one product. The partners hope to launch such vaccines in 2022.

The U.K.’s vaccination program continues to gather steam and is on track to have vaccinated its top four priority groups (the over-70s, residents and staff in elderly care homes, frontline health and social care workers and the clinically extremely vulnerable) numbering around 15 million people, by mid-February.

As of Feb.1, over 9.6 million people had received a first dose of the vaccine, and just under 500,000 had received two doses, according to government data.