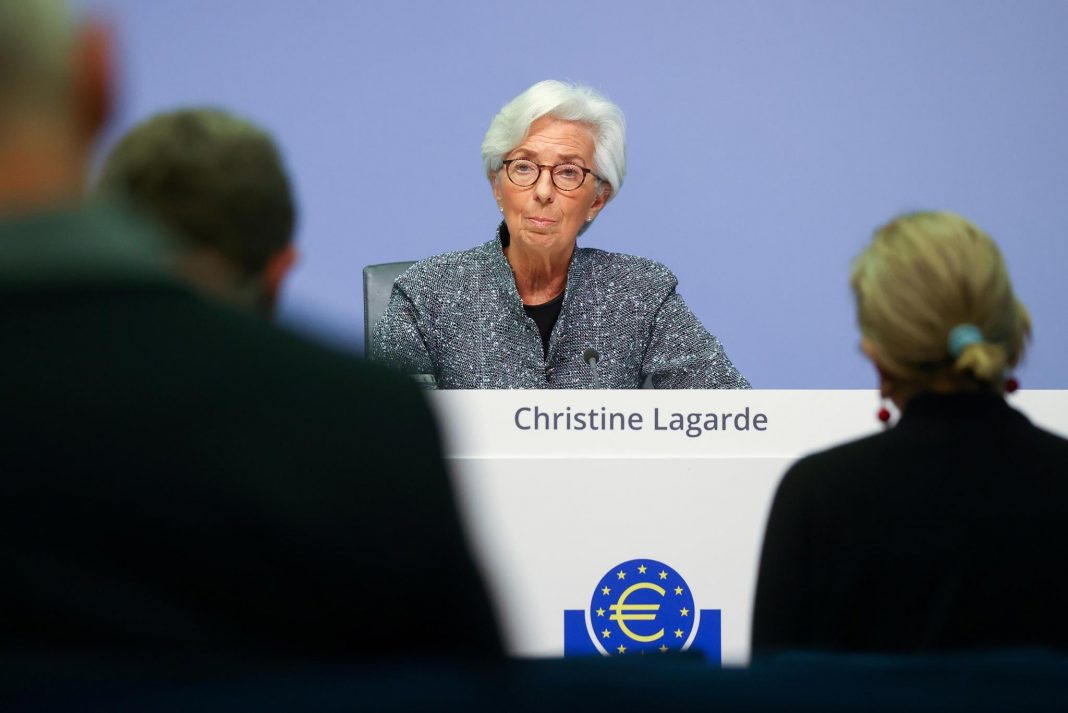 The European Central Bank kept its policy unchanged on Thursday but reaffirmed a pledge to keep borrowing costs at record lows to help the euro zone economy withstand the impact of the coronavirus pandemic.

Having extended their massive bond-buying scheme well into next year in December, ECB policymakers are keen to pass the baton to governments to keep the euro zone economy afloat until normal business activity can resume.

But they said they were prepared to provide even more support to the economy if needed, or to keep some of their powder dry if markets remain benign.

“In any case, the Governing Council will conduct net purchases until it judges that the coronavirus crisis phase is over,” the ECB said in a press release.

The euro rose slightly against the U.S. dollar after the ECB’s announcement.

Fresh lockdowns, a slow start to vaccinations across the 19 countries that use the euro, and the currency’s strength will increase headwinds for exporters, challenging the ECB’s forecasts of a robust recovery starting in the second quarter.

But ECB President Christine Lagarde, who is due to hold a news conference at 1330 GMT, is likely to say more stimulus is not needed now as the ECB has woven so much flexibility into its support schemes it could easily ramp them up without seeking a fresh round of approval from policymakers.

The Bank of Japan also kept its monetary policy steady earlier on Thursday and even increased its growth forecasts for the next fiscal year.

Instead of policy action, Lagarde is expected to try to provide support through nuanced communication, making clear she is aware of the risks while arguing they may be overstated.

She is likely to concede that the immediate future is more challenging than some of the more optimistic forecasts allow, and that commercial banks’ plans to restrict access to credit will be a drag on growth.

But that should not impact the longer term, especially since many key uncertainties have been resolved: COVID-19 vaccines are being deployed, a Brexit deal has been done and President Joe Biden’s inauguration on Wednesday concludes the U.S. election.

There is also around 1 trillion euros of untapped funds in the Pandemic Emergency Purchase Programme (PEPP) to back up her pledge to keep borrowing costs record low.

“If favourable financing conditions can be maintained with asset purchase flows that do not exhaust the envelope over the net purchase horizon of the PEPP, the envelope need not be used in full,” the ECB said.

Recent economic history also favours the ECB. When most of the economy reopened last summer, activity rebounded more quickly than expected, indicating that firms were more resilient than had been feared.

Lagarde may also bat back questions about the euro, arguing that its firming has been almost exclusively against the dollar, analysts said.

On a trade-weighted basis, more relevant for exporters, the single currency has actually weakened since the ECB’s last policy meeting on Dec. 10.

Uncomfortably low inflation is set to remain a thorn in the ECB’s side, for years to come even if surging oil demand helps put upward pressure on prices in 2021.

With Thursday’s decision, the ECB’s benchmark deposit rate remained at minus 0.5% while the overall quota for bond purchases under PEPP was maintained at 1.85 trillion euros.