Home Economy World on the brink of ‘catastrophic moral failure’ due to unfair vaccine... 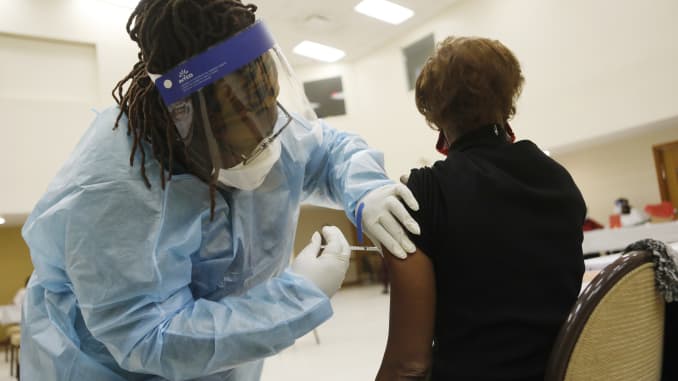 The head of the World Health Organization said Monday the equitable distribution of coronavirus vaccines is at “serious risk.”

Warning of a “catastrophic moral failure,” WHO’s Director-General Tedros Adhanom Ghebreyesus said “the recent emergence of rapidly-spreading variants makes the rapid and equitable rollout of vaccines all the more important.”

But he added that this distribution could easily become “another brick in the wall for inequality between the world’s haves and have-nots.”

“As the first vaccines begin to be deployed, the promise of equitable access is at serious risk,” he said, speaking at a session of the WHO’s executive board.

While more 39 million doses of several different vaccines have now been administered in at least 49 higher-income countries, he said, just 25 doses had been given in one lowest-income country.

“I need to be blunt, the world is on the brink of a catastrophic moral failure and the price of this failure will be paid with lives and livelihoods in the world’s poorest countries.”

Beginning his speech, Tedros had emphasized that the development and approval of safe coronavirus vaccines less than a year after the virus’ emergence in China, in late 2019, was a “stunning achievement and a much needed source of hope.”

However, he added that “it’s not right that younger, healthier adults in rich countries are vaccinated before health workers and older people in poorer countries.”

“There will be enough vaccine for everybody, but right now we must work together as one global family to prioritize (those) most at risk of serious diseases and death in all countries.”

Without naming names, Tedros said some countries and companies speak the language of equitable access but continue to prioritize bilateral deals, bypassing COVAX, which is driving up prices and attempting to jump to the front of the line. “This is wrong,” he said.

COVAX is a global scheme co-led by an international vaccine alliance called Gavi, the Coalition for Epidemic Preparedness Innovations and also the WHO. It was established to ensure equitable vaccine access for every country in the world. It aims deliver 2 billion doses of safe, effective vaccines that have passed regulatory approval and/or WHO prequalification by the end of 2021.

The WHO called on wealthier countries that had pre-ordered millions of doses of coronavirus vaccines, such as the U.S., U.K. and Europe, to share a portion of those vaccines with COVAX, so it can then redistribute these to poorer countries.

Wealthier nations have been accused of “hoarding” more vaccines than they need, although the supply of vaccines is still in its early days as mass inoculation drives — which began in the West in December — are mainly still in their first distribution stage.

Tedros called on countries with bilateral deals with vaccine makers, and on controls for supply, to be “transparent with COVAX on volumes, pricing and delivery dates,” and to share their own doses with COVAX once they have vaccinated their own health workers and older populations.

Home prices rose 4.8% in July, according to Case-Shiller index