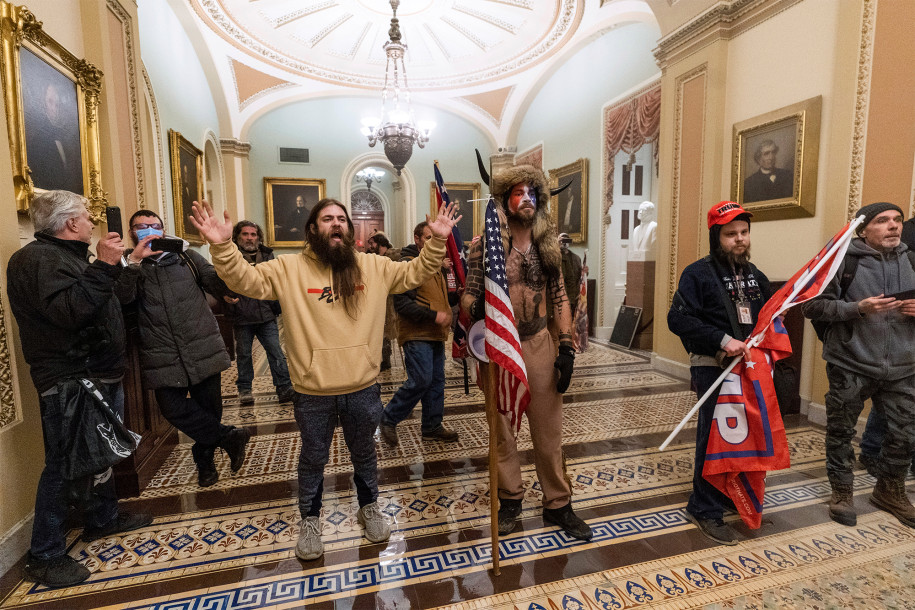 There’s a reason why blameless Republicans and Trump voters are being tarred with the same brush as the Capitol rioters.

It’s not enough just to arrest and prosecute actual lawbreakers who smashed their way into to the Capitol.

No, anyone who supported the president, voted for him or worked for his administration, now has to be hunted down and purged.

They’re losing their jobs, having their insurance canceled, their book contracts and recording deals torn up. They are being banned from flying or banking or speaking on social media.

A petition at Harvard University even demands Trump staffers have their degrees revoked.

A feverish mood is afoot, evoking the spirit of McCarthyism and the Salem witch trials, in which irrationality and hysteria point fingers at the innocent.

But it is not just an emotional overreaction to the frightening events of Jan. 6.

It is a deliberate tactic designed to intimidate conservatives and silence their protests when the Biden administration radically remakes the country, as it has promised to do from Day One.

Democrats and their allies in corporate America are preemptively taking out the opposition because they know that their prescriptions don’t work and are opposed by the majority of Americans.

They will now have control of both houses of Congress and the White House and are working fast to establish one-party rule — including stacking the Supreme Court to remove the remaining check on their power, stacking the Senate by creating two new states, and stacking the nation’s demography with unchecked immigration.

Dismantling border protection is exactly the worst thing to do at a time when our health system is hard-pressed coping with the coronavirus and the economy is weak.

Even if Biden delays his promised implementation of sweeping immigration reform, he has signaled his intent, and caravans of hopeful souls in search of a better life already are on the move in Honduras, in what The Washington Post likes to call a “super spreader event” when reporting on any gathering involving Republicans.

Nancy Pelosi also has revived her H.R. 1. election “reforms,” which failed to pass the Republican-controlled Senate in 2017 and which include such beauties as universal mail-in balloting, same-day registration, weakened voter ID requirements, early voting, doxing of donors and legalized ballot harvesting.

The aim is to entrench the election rule changes made under cover of COVID last year, which benefited the Dems, led so many Americans to lose faith in elections and ultimately fed into the Capitol riot.

H.R.1. is what you call pouring fuel on a fire.

Pelosi also has added statehood for Washington, DC, to her progressive wish list as a “sacred” right, and who will stop her?

The only levers we have left to oppose this authoritarian power grab is protest and free speech.

Hence the crackdown on free speech by a partisan Big Tech oligopoly that wields the ever-present threat of arbitrary censorship over conservatives in the public square.

Just as the death of George Floyd in Minneapolis was the pretext to reanimate racial division in an election year, so, too, is the Capitol riot a golden opportunity for the left to criminalize dissent.

“There are millions of Americans, almost all white, almost all Republicans, who somehow need to be deprogrammed,” Washington Post columnist Eugene Robinson told MSNBC last week in the wake of the Capitol riot.

In other words, all Trump voters are guilty by association. They are seditionists, insurrectionists and white supremacists. They deserve excommunication, deplatforming, and reputational and financial ruin.

Corporate America is heeding the message.

Loews over the weekend caved into Twitter activists and canceled Republican Sen. Josh Hawley’s fundraiser in one of its hotels in February. Simon and Schuster already had canceled Hawley’s book contract after he voted to hold up certification of Joe Biden’s victory.

Musician Ariel Pink had his recording contract canceled because he attended the Trump rally on Jan. 6, even though he says he did not march to the Capitol.

Business journal Forbes warned companies that hire former Trump officials such as Kayleigh McEnany or Kellyanne Conway that they will be blacklisted.

Twitter boss Jack Dorsey told his staff in a video leaked to Project Veritas that banning Trump was just the first step in his purge of Wrong Think. “This is much bigger than one account.”

None of this makes discourse safer. It just drives it underground, where it becomes more toxic.

But the aim is to dehumanize conservatives so that any cruelty can be inflicted on them and they are powerless to resist.

He has always played up his image as a consensus politician able to reach across the aisle. That vapor trail of comity is probably what propelled him to victory.

On Wednesday, he will have the authority to make good on that promise. So far, it doesn’t look promising.

At least there was a small victory for free speech Sunday. Fledgling social-media platform Parler is back online a week after being closed down in a pincer movement by Amazon, Apple and Google.

One of the greatest achievements of the Trump administration was resetting foreign policy: reducing our reliance on China and recognizing its threat, neutralizing ISIS, extracting us from the Iran nuclear deal and establishing the Abraham Accords.

The unsung hero who made it all happen was Secretary of State Mike Pompeo, who has been a stalwart defender of the America First philosophy without the bluster.

He has been making a flurry of announcements as the Trump era draws to a close, including calling out China’s secrecy on the coronavirus.

Few Republicans are better placed to lead the post-Trump revival.