Home Economy From finance to fish: Everything you need to know about a no-deal... 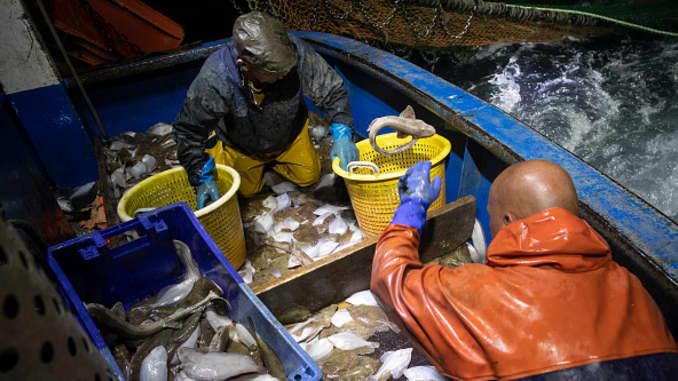 Negotiations between the U.K. and EU to try to reach a post-Brexit trade deal are on a knife edge, and even those in charge have admitted the talks could go either way — toward a deal, a free trade agreement between the two sides, or a no-deal.

Britain’s post-Brexit transition period ends on Dec. 31 so the race is on to reach a deal before then; both the EU and U.K.’s parliament would need to ratify a deal and there are expectations this could be done quickly, given the need to mitigate a “cliff-edge” scenario for businesses on both sides of the English Channel come Jan. 1.

There are glimmers of hope that a deal can still be reached. British Prime Minister Boris Johnson and European Commission President Ursula von der Leyen agreed to continue talks beyond last Sunday. Then on Monday, Von der Leyen noted there had been some “movement” in talks and on Wednesday, said that while she could not say whether there would or would not be a deal, “there is a path to an agreement now.”

“I am glad to report that the issues linked to governance now have largely been resolved. The next few days are going to be decisive,” von der Leyen noted, but, she added, competition rules (to maintain what the EU calls a “level playing field”) and and fishing rights remain unresolved.

What happens in a no-deal scenario?

If no trade deal is reached in the coming days and there is no extension to the transition period (the EU has not ruled out extending talks beyond Dec. 31 but the U.K. has repeatedly rebuffed the notion), then the U.K. and EU will have to trade on World Trade Organization (WTO) terms.

At a basic level, this means that import duties will be placed on each other’s products and trade will become more costly and complex. Prices for consumers on goods are very likely to rise as a result, and U.K. supermarkets are already stockpiling certain long-life goods in case of shortages or delays at ports.

Experts note that trading on WTO terms would be more difficult for some sectors than others.

“Without an agreement on their future trading relations — particularly some kind of free trade agreement — trade between the U.K. and the EU will be based purely on WTO terms,” Catherine Barnard and Anand Menon, senior fellow and director, respectively, of ‘The UK in a Changing Europe’ think tank, noted in a detailed report on the issue.

A no-deal scenario would see other areas of erstwhile cooperation collapse overnight too. Access to U.K. waters for EU fishing fleets (and vice versa) could disappear overnight, travel to the EU from the U.K. might have to stop (at least temporarily due to the coronavirus pandemic) and the services industry could all be sorely affected in a no-deal scenario. All these are still unknowns as negotiations continue.

Trading on WTO terms would mean the U.K. services sector, a large part of its economy that could previously “access the whole of the EU’s single market relatively freely, would only be allowed the much more restricted access of the EU and UK’s commitments in the WTO,” according to The UK in Europe’s Barnard and Menon.

The financial services industry is still one area of uncertainty. The EU has not yet decided whether to grant market access for U.K. banks and other financial firms after Dec. 31 and might not make a decision until January. The lack of clarity has already prompted some banks to move offices and staff to mainland Europe.

Fishing has also been a continuous sticking point during negotiations with the EU keen to maintain access for fishing fleets and the U.K. to largely curb fishing rights. A no-deal scenario could see EU access to U.K. waters end abruptly, and vice versa, and the U.K. has already threatened to deploy gunboats to protect British waters. There are concerns that some fishing fleets could ignore any restrictions, leading to potential clashes. These are not unheard of; there have been physical skirmishes, dubbed the “Scallop wars,” between British and French fishing fleets in recent years amid disputes over fishing.

Travel is one area that concerns many people in the U.K. when it comes to deal or no-deal; The Covid-19 pandemic has cast more uncertainty over possible travel disruption after the transition period ends as the U.K. will become a “third-country” and out of the EU, meaning that British travelers might not be allowed into the region given the high infection rate in the country, unless specifically exempted.

The EU has already published contingency measures covering the aviation and road haulage industry in case there is no deal.

The measures seek to ensure “basic air connectivity … to ensure the provision of certain air services between the U.K. and the EU for 6 months, provided the UK ensures the same” as well as measures to ensure aviation safety continues. It also proposes regulation covering basic connectivity with regard to both road freight, and road passenger transport for 6 months, again provided it is reciprocated by the U.K.

Lastly, and controversially for the U.K. that wants to “take back control” of its territorial waters, the EU proposed a contingency measure over fisheries “for continued reciprocal access by EU and U.K. vessels to each other’s waters after 31 December 2020. In order to guarantee the sustainability of fisheries and in light of the importance of fisheries for the economic livelihood of many communities.”

Economists, analysts and strategists on both sides of the English Channel have spent months, if not the last four years since the Brexit referendum in June 2016 (and very likely, before that) debating the economic impact that Brexit (deal or no-deal) might have on the pound, gross domestic product (GDP), foreign direct investment, property prices and the price of goods, among other things.

Peter Oppenheimer, chief global equities strategist at Goldman Sachs,weighed up the possible impact of a deal and no-deal in a note this week. He and his team concluded that “if ultimately there is no deal, (U.K.) domestic companies would be hit along several dimensions.”

These would be: “1) Lower GDP growth as frictions hit output and trade; 2) Higher costs in GBP (sterling) terms as sterling falls versus other currencies, and 3) lower real incomes for consumers as the basket of goods they buy becomes more expensive in sterling terms.”

Goldman reiterated its no deal Brexit target for EUR/GBP to 0.96 (a euro is currently trading at around 90 pence) “but would expect markets to only partially price that even if talks are unsuccessful over the next few weeks.”

Would no-deal be so bad?

Capital Economics’ chief U.K. economist Paul Dales argued in a note this week that a “no deal” scenario would be “very different to the ‘no deal’ that people have been talking about since the EU referendum in June 2016.”

“At that point, ‘no deal’ meant the U.K. leaving the EU with no agreements on anything whatsoever. But now, a “no deal” would most probably involve all those agreements in the Withdrawal Agreement (the financial settlement, citizens’ rights, Northern Ireland), the substantial progress made on financial services equivalence and the rollover of the bulk of the U.K.’s third-party EU trade deals,” he noted.