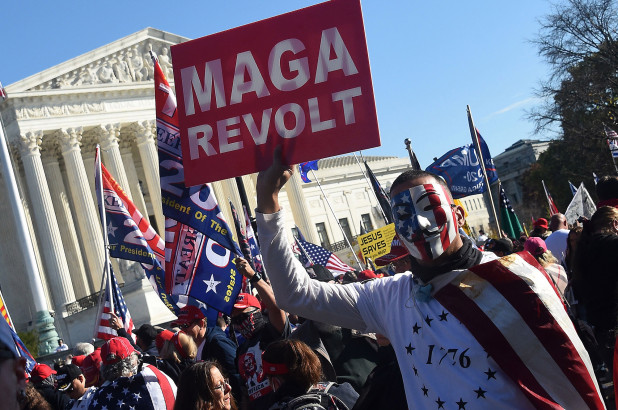 You just had to see the enthusiastic cheer of tens of thousands of pro-Trump protesters who flocked to Washington, DC, over the weekend to understand it doesn’t really matter what the final electoral vote tally is: Trumpism has won.

For four years, Donald Trump was written off, attacked, spied upon, lied about and impeached, and yet, after all that, just by standing firm for traditional American values, he increased his vote by 10 million.

More than 73 million free-thinking Americans refused to be intimidated, tricked or shamed out of voting for Trump. They saw through four years of lies about Russia collusion, golden showers in Moscow hotels, corruption in Ukraine, “suckers and losers,” and “white supremacists.”

Even if, as seems probable, Joe Biden ends up living in the White House, and inviting his son Hunter to dinner with new business prospects from China, the corrupt bipartisan globalist establishment is not back in the ascendancy.

Despite the predictions of experts, there was no “blue wave.” The election was a firm repudiation of socialism, “defund the police” madness and the rest of the woke smorgasbord Dems offered.

Rather than losing 15 to 20 seats in the House, Republicans have taken at least seven seats from Democrats, with several still to be called.

It will be the smallest majority the Dems have had since World War II.

No incumbent Republican lost a seat in the House.

Republicans will keep control of the Senate, if the two Georgia runoffs go their way. They did not lose a single state legislature, and appear to have gained three.

“Every Democrat has been beaten by a Republican woman, Republican minority or Republican veteran,” House Minority leader Kevin McCarthy told Fox News. “We are more diverse and stronger because of what President Trump has done.”

At last count, there will be nine new Republican women entering the house, led by New York’s own Nicole Malliotakis, the daughter of a Cuban refugee. There are so many, she is talking about forming her own “Squad,” to counter the one created by Rep. Alexandria Ocasio-Cortez: a group of new Republicans who love America. “We value freedom, liberty and opportunity,” Malliotakis, 40, told The Post.

She flipped her district running on family values and law and order.

The other conservative women who flipped Dem seats are Young Kim and Michelle Park Steel, Christian Korean immigrants from California, Maria Salazar, the daughter of a Cuban refugee from Florida, Ashley Hinson of Iowa, Michelle Fischbach of Minnesota, Yvette Herrell of New Mexico, Stephanie Bice of Oklahoma and Nancy Mace of South Carolina.

Meanwhile, shell-shocked Democrats are screaming at each other in Zoom post-mortems, and branding the result a “dumpster fire,” with socialists and moderates blaming each other.

Another bright spot is that divisive House Speaker Nancy Pelosi looks to be on her last legs.

According to McCarthy, 15 Democrats voted against her in the last Congress, and 10 of those are returning. If they vote as they did before, she will not win the 218 votes she needs on the floor for the speakership. Good riddance.

The election was a repudiation of Pelosi’s unhinged hatred and of the hypocrisy of Democratic leaders who spent four years trying to railroad Trump out of office and now complain he is “delegitimizing” Joe Biden by pursuing legal avenues to contest the results of a close election, just as did Democrats Al Gore and Stacey Abrams, who, last time I looked, still hadn’t conceded the 2018 Georgia gubernatorial race.

Among the worst hypocrites last week was former President Barack Obama, who complained Trump was “delegitimizing not just the incoming Biden administration, but democracy generally.” Says the president whose administration spied on the Trump campaign, framed Gen. Michael Flynn as a Russian agent and set in train the Russia-collusion hoax.

And how about House Intelligence Committee chairman and impeachment fantasist, Adam Schiff? He complained Trump is “tearing down our democracy” and lamented the new Congress will “try to . . . delegitimize Joe Biden.” Hah!

It’s not Trump’s fault that millions of voters don’t trust the integrity of this election.

The real culprits are Democrats who opportunistically changed the rules at the last minute, under cover of the pandemic, with their armies of lawyers filing multiple suits to weaken voter-ID laws and weight the scales in their favor.

The result in a close election is widespread doubt.

Even if there were no skulduggery, the Trump campaign lawsuits come to nothing and the Dominion voting machines and their suspicious sounding software get a clean bill of health, it’s a service to public trust for the Trump campaign to go through a process that is legal and accounted for within the Constitution.

If there has been no fraud or miscounting, then public faith will be restored in the integrity of our elections going forward. That is a good thing which Biden should embrace if he really believes in unity and healing.

Yet again, the pragmatic outsider businessman Trump will have cleaned up a mess in the American bureaucracy. For that, and much more we owe him a debt of gratitude.

The more Gov. Cuomo gets away with treating New York badly, the crueler he is.

It wasn’t enough that he doomed thousands when he ordered nursing homes to take COVID-infected patients at the height of the pandemic. Or that his squabbles with Mayor Bill de Blasio created confusion at crucial times. Or that he wrote a book congratulating himself afterward. Or that he skipped 17 White House meetings about COVID vaccines.

Now he has delayed New Yorkers’ access to the new vaccines.

How smart he thought he was when Pfizer announced its vaccine last week and he said we couldn’t have it while Donald Trump was president because he didn’t trust him.

We would just have to wait two months so Joe Biden could take credit.

What did he think would happen? Trump announced the general public will have the vaccine for free, but the rollout will start with those states that can use it immediately.

So, we are at the back of the queue, thanks to Cuomo’s fragile ego. And now he wants to sue because he got what he asked for.

“Defund the police?” he tweeted theatrically last week. “Defund, my butt. I’m a proud West Virginia Democrat . . . We do not have some crazy socialist agenda, and we do not believe in defunding the police.”

It’s a performance, as is AOC’s tweeted photo of herself looking daggers at him.

Manchin will vote reliably for his party even if it is against the interests of his constituents, just as he did in the last Congress. He voted against President Trump 67.5 percent of the time, including on impeachment and the nomination of Supreme Court Justice Amy Coney Barrett.