Home Economy Just 20 companies are responsible for over half of ‘throwaway’ plastic waste,... 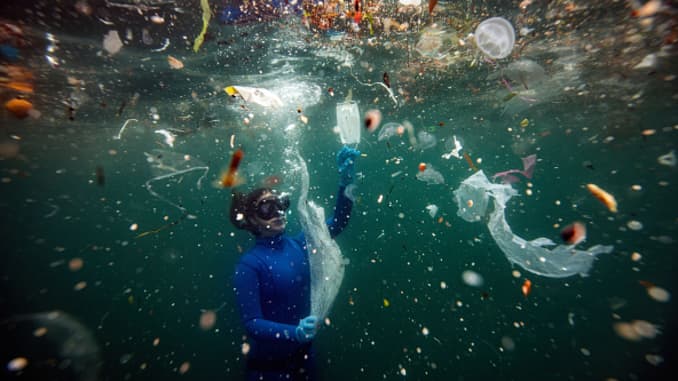 Just 20 companies are the source of more than half of single-use plastic items thrown away globally, according to the findings of a new study, highlighting the devastating impact this has on the environment.

The Plastic Waste Makers Index, published Tuesday, names the companies who are at the forefront of the plastic supply chain and manufacture polymers, known as the building block of plastics. It also highlighted that the firms identified are supported by a small number of financial backers.

Single-use plastics, such as bottles, bags and food packages, are the most commonly discarded type of plastic. Made almost exclusively from fossil fuels, these “throwaway” plastics often end their short lifecycle polluting the oceans, being burned or dumped into landfills.

The study says 20 petrochemical companies are responsible for 55% of the world’s single-use plastic waste.

The findings were published by the Minderoo Foundation, one of Asia’s largest philanthropies. The research was conducted by academics from the London School of Economics, the Stockholm Environment Institute and Wood Mackenzie, among others.

Meanwhile, close to 60% of the commercial finance funding the plastic waste crisis comes from just 20 global banks, the study said. A total of $30 billion of loans from these institutions, including Barclays, HSBC and Bank of America, among others, has supported the sector since 2011.

As awareness of the toll of plastic pollution has grown, the petrochemical industry has told us it’s our own fault and has directed attention toward behavior change from end-users of these products, rather than addressing the problem at its source.

The research also assessed the countries that are the biggest contributors to the single-use plastic crisis, based on per head of population. Australia and the U.S., respectively, were found to produce the greatest amounts of “throwaway” plastics, at more than 50kg per person per year in 2019.

South Korea and the U.K. were found to generate 44kg of single-use plastic waste per person.

“The trajectories of the climate crisis and the plastic waste crisis are strikingly similar and increasingly intertwined,” Al Gore, former U.S. vice president, said in a statement accompanying the research.

“As awareness of the toll of plastic pollution has grown, the petrochemical industry has told us it’s our own fault and has directed attention toward behavior change from end-users of these products, rather than addressing the problem at its source,” he added.

‘Break the pattern of inaction’

Environmental activists have previously laid the blame for plastic waste at companies such as PespiCo and Coca-Cola. However, this study suggests that a group of petrochemical companies are actually the source of the crisis — one that has devastating ecological, social and environmental consequences.

CNBC contacted the top companies identified as being responsible for the plastic waste crisis and the leading banks enabling waste generation.

In response, a spokesperson at ExxonMobil said the company “shares society’s concern about plastic waste and agrees it must be addressed.”

“ExxonMobil is taking action to address plastic waste by increasing plastic recyclability, supporting improvements in plastic waste recovery – for example, through our founding membership in the Alliance to End Plastic Waste – and minimizing plastic pellet loss from our operations,” they added.

The other companies contacted were not immediately available to return a request for comment.

“Our reliance on oil and gas is not only fuelling climate change, but as the primary material used in the production of throwaway plastics is also devastating our oceans,” said Sam Fankhauser, professor of Climate Change Economics and Policy at the Smith School, University of Oxford.

“It is critically important petrochemical companies move towards circular-economy-based alternatives if we are going to successfully tackle these interlinked crises,” Fankhauser said.

The report warns that plastic production is set to grow by 30% in the next five years, creating even more plastic waste and exacerbating the climate emergency.

“This is the first-time the financial and material flows of single-use plastic production have been mapped globally and traced back to their source,” said Toby Gardner, senior research fellow at the Stockholm Environment Institute.

“Revealing the sheer scale of the global crisis we have on our hands, its critical we break the pattern of inaction. You can’t manage what you can’t measure. Building on the analysis published today, this is why it is so important the small group of companies and banks that dominate global production of throwaway plastics begin to disclose their own data.”