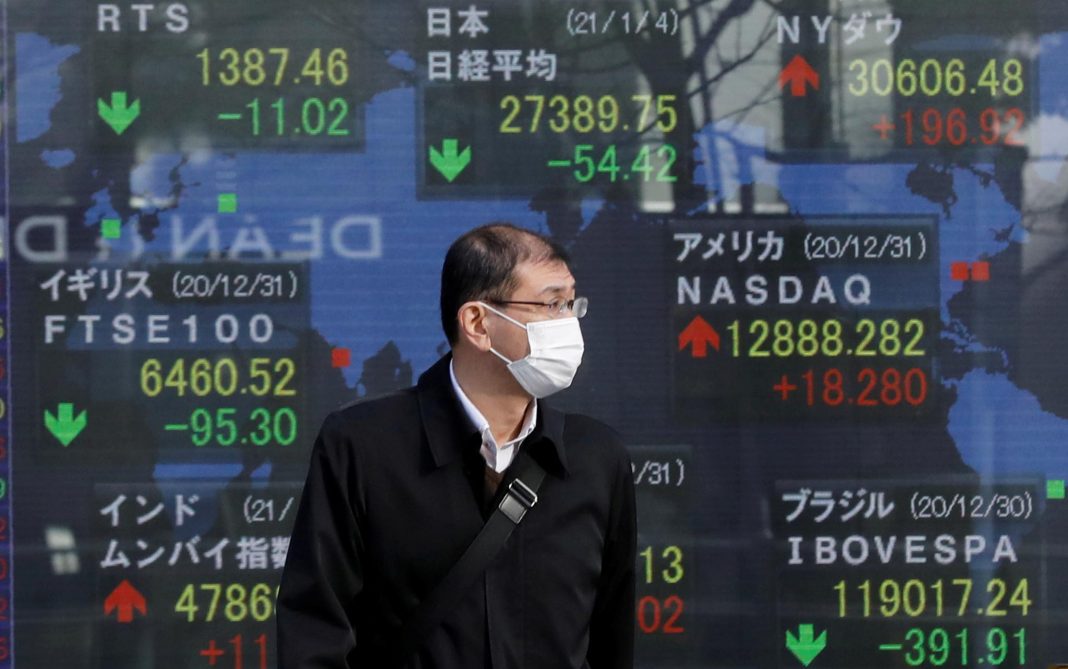 Global stocks slipped and cryptocurrencies sank on Wednesday as a threat of unwanted inflation had investors shy away from assets seen vulnerable to any removal of monetary stimulus.

European stocks are expected to drop, with both Euro Stoxx futures and Britain’s FTSE futures trading about 1% lower.

MSCI’s broadest index of Asia-Pacific shares outside Japan dropped 0.3% though Hong Kong and South Korea are closed for holidays.

U.S. S&P futures fell 0.3% in Asia a day after Wall Street stocks slid in late Tuesday trade, unable to sustain gains made after bumper earnings from Walmart and Home Depot.

The S&P 500 on Tuesday lost 0.85%, with telecom shares leading the decline, while the Nasdaq Composite dropped 0.56%.

“Due to supply chain disruptions and labour constraints, there are worries companies may not be able to match their supply with increasing demand,” said Arihiro Nagata, general manager of global investment at Sumitomo Mitsui Bank.

While demand is recovering fast as many developed countries have made progress with COVID-19 vaccination, companies are facing obstacles from shortages of chips, containers, and in the United States workers, too, stoking worries of higher prices.

The Federal Reserve has stuck to the narrative that a recent rise in inflation would be transient and that it therefore should keep its easy monetary policy settings.

The minutes from the Fed’s April meeting, to be published late on Wednesday, are expected to repeat that message.

“Inflation remains the biggest theme, whether it is real and whether the Fed may need to change its policy because of that,” said Kazushige Kaida, head of forex sales at State Street Bank’s Tokyo branch. “At the moment, markets are putting faith, after a fashion, in the Fed’s narrative.”

Yet inflation data from UK and Canada due later on Wednesday could rekindle concerns following an unexpected pickup in U.S. consumer inflation shown earlier this month.

That could hit assets whose prices have been bolstered by monetary easing, including cryptocurrencies, which rose sharply over the past year and are seen by some as exemplifying an excess created by a “wall of money” from central banks.

Ether, the second largest cryptocurrency, shed as much as 15.5%, and a third of its value from its record peak hit last Wednesday. It last changed hands at $3,018, down 10.7%.

While cryptocurrencies were bruised by China’s fresh ban on their transactions, they were not alone in facing pressure.

Some commodities that have benefited from reflation trade have also lost steam, with U.S. lumber futures losing almost 25% in the last three sessions.

Oil prices pulled back also after media reports the United States and Iran have made progress on reviving a deal restricting the OPEC country’s nuclear weapons development, a development that could lead to increased supply from Iran. [O/R]

In the currency market, the dollar stayed under pressure as U.S. yields stayed flat.

The euro hit a near three-month high of $1.22355 while the British pound held firm at $1.4191, staying near a three-month peak touched on Tuesday.

The dollar stood at 108.92 yen after four straight sessions of decline.

Precious metals were solid, with gold hitting its highest level since late January on Tuesday and last stood at $1,867.50 per ounce.