Home Economy GM, Ford and others cut thousands of jobs and closed factories to... 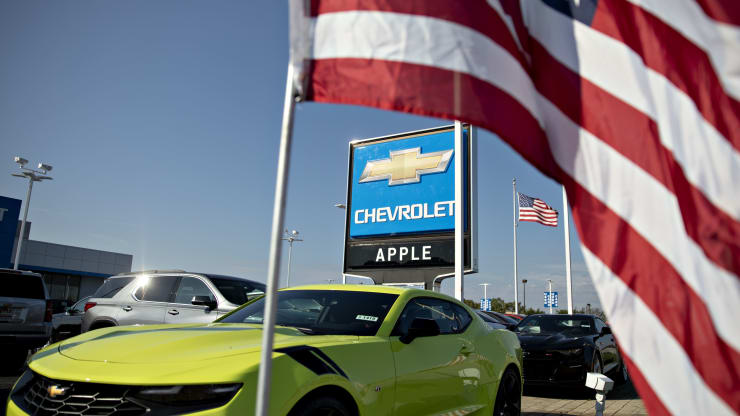 General Motors, Ford Motor and other automakers in the past year cut thousands of jobs and shuttered factories as industry vehicle sales slow and fears of an economic slowdown pick up.

No one is forecasting an industry downturn comparable to when vehicle sales dropped below 11 million in the U.S. in 2009. However, domestic sales next year are forecast to drop for a second consecutive year in 2020 to below 17 million vehicles. Global vehicle sales also are expected to fall by about 3.1 million in 2019 – the steepest year-over-year decline since the financial crisis a decade ago.

Automakers took lessons learned from the Great Recession, which led to the government-backed bankruptcies of GMand then-Chrysler in 2009, to proactively restructure operations this year amid robust profits and healthy, yet slowing, vehicle sales.

“The industry was ill prepared for the crash in 2009 and the people who are in charge of the companies were around then,” said Michelle Krebs, executive analyst at Cox Automotive. “They remember it like it was yesterday. They are not going to make the same mistakes.”

Unlike 10 years ago, many of the actions taken this year were done in an attempt to safeguard investments in emerging technologies such as autonomous and electric vehicles. Both are considered to be potential multitrillion-dollar industries.

“They’re doing this at a time when the economy and the car market are good but starting to slip,” Krebs said. “The pie is shrinking, and they’re setting themselves up for that as well as this new future … Everybody is in the same boat on this in a way we’ve never seen before.”

Both GM and Ford this year cut thousands of jobs and closed or announced plans to close roughly a dozen factories globally, including four in the U.S.

“We are taking proactive steps to improve our core business performance, capitalize on future mobility opportunities, improve our downturn protection, and create shareholder value,” GM CEO Mary Barra said when announcing significant restructuring actions in November 2018, many of which occurred in 2019.

GM’s announcement included reducing its headcount by 14,000 people and closing seven plants globally, including five in North America (one of which will be retooled and reopen) and two elsewhere. It came weeks after Barra said the company was continuing to position itself to “outperform in a downturn.”

The Detroit automaker expects the cost-cutting initiatives to save the companyup to $6 billion annually.

Ford took similar actions for its business to remain “vital and vibrant business through all cycles,” as Ford CEO Jim Hackett described it in May.

Since starting to lead Ford in 2017, Hackett has executed a number of global cost-savings measures as part of an $11 billion restructuring plan through the early-2020s, including significant cuts to its workforce and operations in 2019.

In June, Ford announced it would cut 12,000 mostly hourly jobs at its operations in Europe by the end of 2020. The announcement came a month after plans to cut about 7,000 salaried jobs globally, including 2,300 in the U.S.

Under the plans announced this year, Ford said it would close a U.S. engine plant in Michigan and shutter or sell off six of its 24 European plants.

“We feel we are very lean now and we’re very positioned for a downturn in case one comes,” said Kumar Galhotra, Ford president of North America, during the J.P. Morgan Auto Conference in August.

Fiat Chrysler took a different route than its Detroit rivals in addressing its costs. After years of rebuffs, the Italian-American carmaker finally found a merger partner, French automaker PSA Group.

The sides last week signed a binding merger agreement to create the world’s fourth-largest automaker by volume. The 50-50 all-share merger fulfills former CEO Sergio Marchionne’s vision of creating a global automaker with the resources to successfully compete in the ever-changing auto industry.

Marchionne, who unexpectedly died in July 2018, called for industry consolidation in a presentation called “Confessions of a Capital Junkie” in 2015. He believed only a handful of the world’s largest automakers would survive and have the capital to compete as automakers push for autonomous and all-electric vehicles.

Fiat Chrysler CEO Mike Manley and PSA CEO Carlos Tavares, who will lead the unnamed combined company, last week stressed that the merger is occurring at the right time, as both companies report healthy profits.

The $50-billion merged company is expected to achieve cost savings of 3.7 billion euros (US $4.1 billion) a year without closing factories.

Other restructurings in 2019 included: