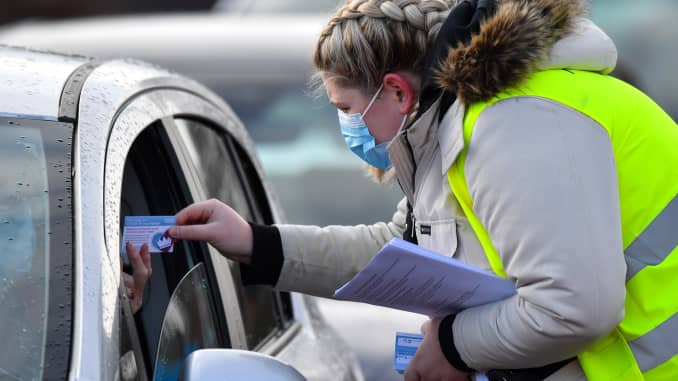 U.K. health officials are anxious to trace one of six individuals infected with a more contagious variant of the coronavirus, initially identified in Brazil.

Up to six cases of the new strain — dubbed P.1 and considered a “variant of concern” by global health experts — have been detected in the U.K., with three cases in Scotland and three in England.

However, what’s troubling officials is that one of the three cases found in England has not been traced. The government issued a statement Sunday noting that two of the cases in England are from one household in South Gloucestershire with a history of travel to Brazil, and “there is a third, currently unlinked case.”

The cases in South Gloucestershire, in southeast England, were rapidly followed up by a team from Public Health England, and their contacts were identified and retested, the government said. All passengers on the same flight — Swiss Air flight LX318 from Sao Paulo, via Zurich, to London Heathrow on Feb.10 — were also being traced by officials.

As a precaution, health officials are stepping up testing of asymptomatic cases in the South Gloucestershire area, and increasing the sequencing of positive samples from the area.

However, further investigation is underway regarding a separate, third case of the variant identified in England, with health officials appealing to anyone who did not receive a result from a Covid test carried out on Feb. 12 or 13 to come forward.

“The individual did not complete their test registration card so follow-up details are not available,” the government noted.

“We are therefore asking for anyone who undertook a test on 12 or 13 February and hasn’t received their result or has an uncompleted test registration card, to call 119 in England or 0300 303 2713 in Scotland for assistance as soon as possible.”

U.K. Health Secretary Matt Hancock will hold a meeting later Monday to update British lawmakers from all parties on the variant, the BBC reported.

Why are officials worried?

Health officials are worried because the variant first identified in Brazil is believed to be a more infectious strain of the coronavirus and could cause more severe infections. There are also concerns that it could make coronavirus vaccines less effective, however this is not confirmed, and investigations are currently being carried out to see whether this is the case.

Britain has already contended with the spread of a far more infectious variant that was responsible for a surge in cases in the winter. The strain has since become dominant in the country, and has spread worldwide.

With regards to the strain found in Brazil, it said 29 countries had reported cases to date. This P.1 variant was first identified in four travelers from Brazil to Japan in January, during routine screening at Haneda airport outside Tokyo.

The strain has been designated “of concern” as it shares some crucial mutations with the variant first identified in South Africa.  The P.1 variant has 17 unique mutations in all, according to the U.S. Centers for Disease Control and Prevention, and was also first detected in the U.S. at the end of January.

When the first cases of the this variant were detected in the U.K., the rules required anyone travelling from abroad to self-isolate at home for 10 days.

However, this changed on Feb. 15, and now travelers to the U.K. are required to quarantine in hotels, at their own expense, for 10 days. In mid-January, the U.K. banned travelers from a range of South American countries from entering the country, unless they had residence rights.

The move was an attempt to prevent more infectious variants spreading and potentially undermining the country’s so-far successful coronavirus vaccine rollout. On Sunday, the U.K. hit another milestone, having vaccinated 20 million people with a first dose of a Covid vaccine.

Dr Susan Hopkins, PHE’s strategic response director for Covid-19 and NHS Test and Trace Medical Advisor, said the new cases in the U.K. were identified thanks to the country’s advanced sequencing capabilities “which means we are finding more variants and mutations than many other countries and are therefore able to take action quickly.”

“The important thing to remember is that Covid-19, no matter what variant it is, spreads in the same way. That means the measures to stop it spreading do not change,” she said, advocating good personal hygiene and only leaving the house for essential reasons.

The three cases identified in Scotland were found in individuals that had returned to Aberdeen from Brazil via Paris and London. These cases are not linked to the three cases in England.

As required at the time, the individuals entered self-isolation following their return to Scotland and then subsequently tested positive for coronavirus. The individuals then self-isolated for the required period of 10 days, Scotland’s government said in a statement.

Due to the potential concerns around this variant, other passengers on the flight from London to Aberdeen were being contacted, the Scottish government noted.