Home Economy South Africa readies ‘most important’ budget yet as recovery hangs in the... 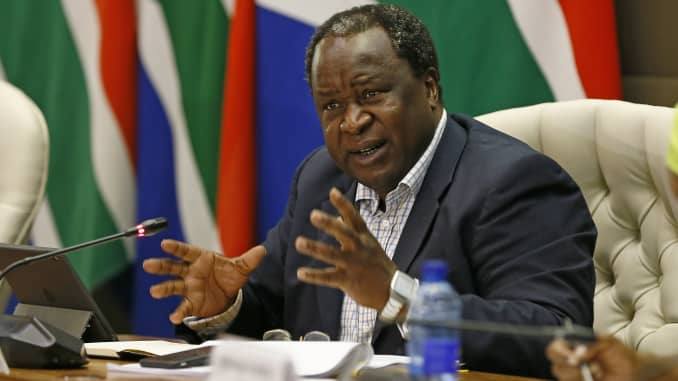 South African Finance Minister Tito Mboweni will deliver the country’s 2021 budget on Thursday, with the country facing ever-increasing fiscal pressures in the wake of the coronavirus pandemic.

South Africa’s economy enjoyed a strong final quarter of 2020 based on hard activity data thus far, and the IMF expects a modest rebound of 3% in real GDP in 2021 following last year’s 8% contraction.

However, the pace of recovery has been hampered by renewed lockdown measures which have seen the country seemingly quash a second wave of Covid-19 cases.

South Africa was blighted by a new, highly transmissible strain of the virus towards the end of 2020, and recently delayed its rollout of the AstraZeneca-University of Oxford vaccine amid concerns that it exhibits limited effectiveness against that particular strain, known formally as the B.1.351 mutation.

As of Wednesday, the country’s seven-day average of daily new infections sat at just above 2,000, having topped 19,000 in mid-January, according to data compiled by Johns Hopkins University.

Figures from Stats SA on Wednesday showed retail sales contracted by 0.8% year-on-year in December, a much smaller decline than expected, following a 4% drop in November. Industrial output unexpectedly rose by 1.8% annually after a 4.1% drop in November. Mining and manufacturing both climbed year-on-year for the first time since the onset of the pandemic.

Virag Forizs, emerging markets economist at Capital Economics, said the figures indicate that the South African economy likely avoided a double-dip recession to expand by between 1% and 1.5% quarter-on-quarter.

However, she suggested that the containment measures imposed to combat the second wave of the pandemic would weigh on activity for the first quarter of 2021, along with continued power cuts due to long-standing challenges at debt-laden state-owned utility Eskom.

“Looking ahead, we think that the recovery will remain sluggish. The government’s vaccination campaign is facing serious hurdles, electricity problems will probably not subside any time soon and harsh fiscal austerity will keep demand subdued,” Forizs said in a note Wednesday, projecting that GDP is likely to remain around 2% below its pre-virus path by 2022.

Although the country appears to be through the second wave and the government has begun to ease restrictions since the beginning of February, public finances and the measures taken to rein them in will continue to be a key focus of Thursday’s budget.

Ratings agency Moody’s has South Africa on a negative outlook and has signaled that it is “more likely” to see a further sovereign credit rating downgrade this year, following two downgrades in 2020.

It also forecast that the country’s debt-to-GDP ratio will hit 100.7% during the 2021/22 fiscal year, claiming the country’s credit profile is “constrained by strong, widespread fiscal pressures, including rising borrowing costs and persistently low growth.”

Government revenues came in much higher than expected in December, rising by 10% year-on-year to 176.4 billion South African rand ($12.1 billion), but cumulative fiscal revenues for the first three quarters had fallen by 10.1% year-on-year.

Higher commodity prices and a general rise in global risk-on sentiment have boosted interest in South African assets, with local authorities hoping the incline in commodity prices may help in cutting some of the budget shortfalls, according to Pieter du Preez, senior economist at NKC African Economics.

‘Most important’ budget yet

Considering the already brittle state of the economy prior to the pandemic and events since, du Preez suggested that Mboweni’s budget on Thursday will be “the most important one yet.”

“Fiscal stimulus measures to support the economy amid the Covid-19 pandemic, together with the loss in government revenue, have exacerbated the problems for the Treasury,” du Preez said in a note last week.

He added that speculation has arisen over the past month that the cash-strapped government is weighing up numerous tax measures to plug the hole in its 2021/22 budget.

“One of the crucial expenditures for the coming fiscal year will be the R24bn vaccine rollout programme announced by government to inoculate two-thirds of the population – a figure which is needed to achieve herd immunity – by year-end,” du Preez said.

“Bearing in mind the latest positive data, we would not expect the Treasury to increase the tax burden on consumers and corporates given the current climate and the already high tax-burden South Africans face compared to other emerging market countries.”