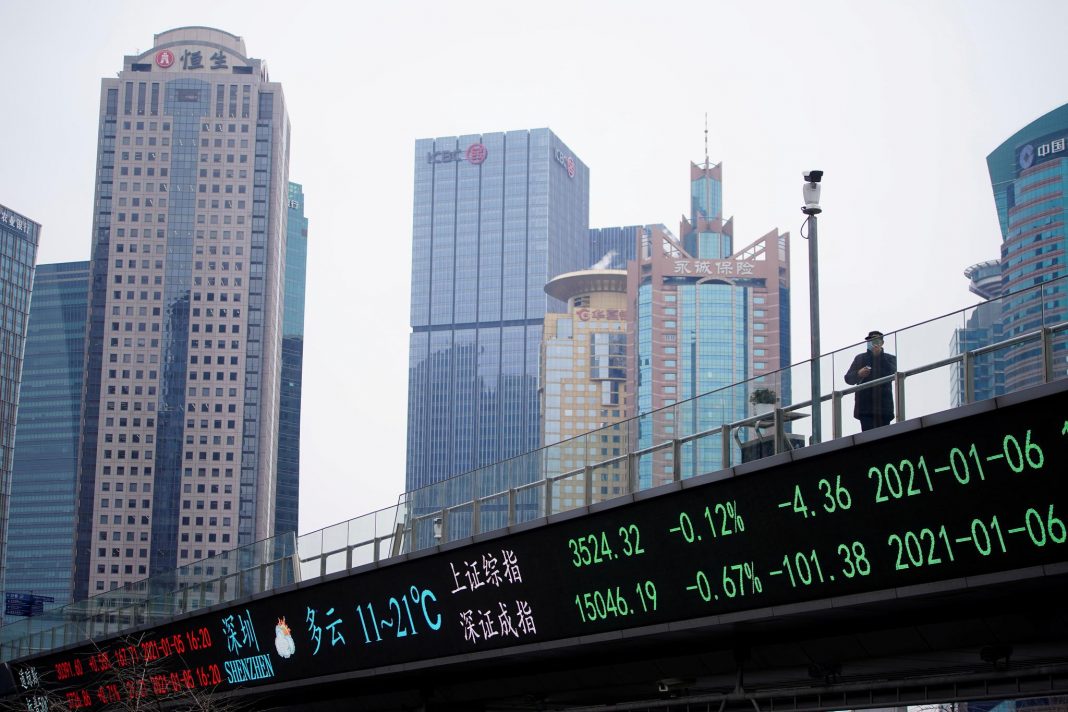 Global shares traded near record highs on Friday, with Asian stocks taking their lead from Wall Street, as progress in vaccine distribution prompted bets on further normalisation in the global economy and an earnings recovery.

European stocks are expected to open on a firm footing, with euro stoxx futures up 0.3% in early trade while Britain’s FTSE futures were flat.

On Wall Street, each of the major indexes rose more than 1% on Thursday, with the Nasdaq Composite Index and S&P 500 setting record highs.

“And there are piles of money saved in MMF (money market funds) and elsewhere that are likely to be invested in stocks once the economy normalises as vaccination programmes progress.”

Expectations of a large stimulus by U.S. President Joe Biden’s administration also supported risk sentiment while better-than-expected data on U.S. job markets released in the past two days is fanning a bullish mood ahead of the payroll report due at 1330 GMT.

Longer-term U.S. Treasury yields rose in anticipation of a large pandemic relief bill from Washington as well as on heightening inflation expectations.

Bond yields rose in Europe as well, with Germany’s 30-year government bond yield climbing back into positive territory for the first time since September.

In the currency market, the dollar strengthened against most of its peers as traders’ focus shifted to the relative strength of the U.S. growth.

Until recent weeks, the dollar had been sold on expectations that a global economic recovery will promote outflows of funds to riskier currencies from the safe-haven dollar.

The U.S. dollar index stood near a two-month high, having risen 1.1% so far this week, on course for its biggest weekly increase since late October.

“It seems markets are now trying to trade on economic normalisation based on progress in vaccination,” said Arihiro Nagata, general manager of global investment at Sumitomo Mitsui Bank.

“The fact that the only currencies that are doing better than the dollar over the past two days are the British pound and the Israeli shekel, the two countries that are going further ahead in vaccination, seems to support that.”

The shekel rose over the past two days, reversing its decline since mid-January after the Bank of Israel intervened to stem the shekel’s strength after it had hit a 24-year high.

Oil extended its gains on upbeat economic mood, falling inventories and the OPEC+ decision to stick to its output cuts.