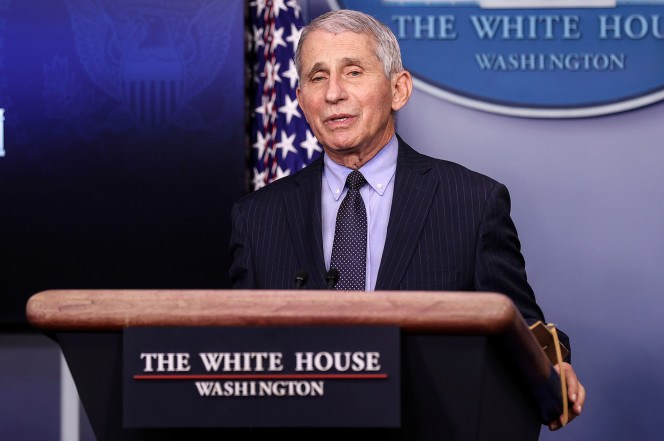 In his inauguration speech, President Biden pledged to “defend the truth and to defeat the lies.”

So let’s start by being brutally honest about Dr. Anthony Fauci, who has been the source of some of the most damaging misinformation about COVID-19.

At the very least, the nation’s top infectious diseases expert and chief medical adviser to Biden is loose with the facts and is prone to changing his mind.

This is the man who dictated coronavirus policy in the Trump administration. If mistakes were made, as the Biden administration claims, they are Fauci’s.

Yet, astonishingly, Fauci told CNN Friday that a “lack of candor” from the Trump administration had cost American lives.

If people’s lives really were at stake last year, why did he wait until now to tell us?

Chalk it up to another convenient fib from a habitual fibber, who has deceived us on everything from masks to herd immunity.

Even if you decide these are not lies but lapses of judgment by Fauci, they had potentially lethal consequences.

Take, for instance, Fauci’s serenity back on Jan. 21 last year, when he assured us that the virus convulsing China at the time “is not something the citizens of the United States should be worried about.”

To be fair, the pandemic caught a lot of people unaware, but the thing about Fauci is that he always is so sure of himself.

The following week, he was at it again, vehemently opposing President Donald Trump’s proposed flight ban from China, which Biden at the time decried as “xenophobia.”

It was Jan. 28, and Trump had asked his trade adviser, Peter Navarro, into the Situation Room to convince Fauci and other officials that the China travel ban would save lives.

“The guy I fought the most that day was Fauci,” Navarro told me Sunday. “He was adamantly opposed to the travel ban. All he kept saying was travel restrictions don’t work.”

Navarro pushed back, “ ‘If you stop 20,000 Chinese nationals coming in every day and some are infected, you’re telling me that’s not going to spread the virus?’ It was like talking to a brick wall.”

“I papered everybody in the task force with the memo and . . . it flipped everyone to supporting the president,” Navarro said.

Trump imposed the travel ban on Jan. 31 and Fauci later credited the action with saving lives.

But, says Navarro, “If Biden had been president and Fauci had been the top adviser, we would probably have a million more Americans dead.”

Then there was Fauci’s advice on masks.

Back in March, when the coronavirus was decimating New York, he told us masks were useless.

“Right now in the United States, people should not be walking around with masks,” he told “60 Minutes.”

Three months later, he did a backflip: “Masks work . . . to prevent you from infecting someone else . . . but also, it can protect you to a certain degree.”

Posing by his pool in sunglasses and novelty socks last June, Fauci told InStyle magazine he had no regrets about lying:

“We were told . . . we have a serious problem with the lack of PPEs and masks for health providers [and decided] we really need to save the masks for the people who need them most.”

It was a noble lie, so he didn’t feel the need to apologize or even be slightly ashamed.

But nothing was more corrosive of public trust in medical experts at the height of the pandemic.

If Fauci lied about masks, what else would he lie about?

Turns out he lied about herd immunity, too.

In December, Fauci admitted to the New York Times that he had “slowly but deliberately been moving the goal posts” on the percentage of the population that needed to be vaccinated before “herd immunity” against ­COVID-19 was reached.

“When polls said only about half of all Americans would take a vaccine, I was saying herd immunity would take 70 to 75 percent. Then, when newer surveys said 60 percent or more would take it, I thought, ‘I can nudge this up a bit,’ so I went to 80, 85,” he said.

Fauci is not precise with numbers, which is odd for a scientist who professes to care about facts.

For instance, on Biden’s first day last week, Fauci said we would have “100 million people vaccinated in the first 100 days” and specified he meant both “primary and boost” shots, a total of 200 million shots in arms.

On Sunday, he was forced to “clarify that, because there was a little bit of a misunderstanding. What we’re talking about is 100 million shots in individuals.”

The 100 million goal is fake anyway, since we’re already there. In the week before the inauguration, 912,000 shots were administered per day, according to Bloomberg News’ tracker. On Inauguration Day, it was 1.6 million shots.

That would suit Fauci because, for an expert, he never seems to know the answer to anything.

“Never get cocky with COVID,” he said, proud of the catchy alliteration.

Maybe he should have taken his own advice before he accepted an Emmy and wrote a book congratulating himself for the nation’s worst COVID response.

That’s what you call cocky, in every sense of the word.