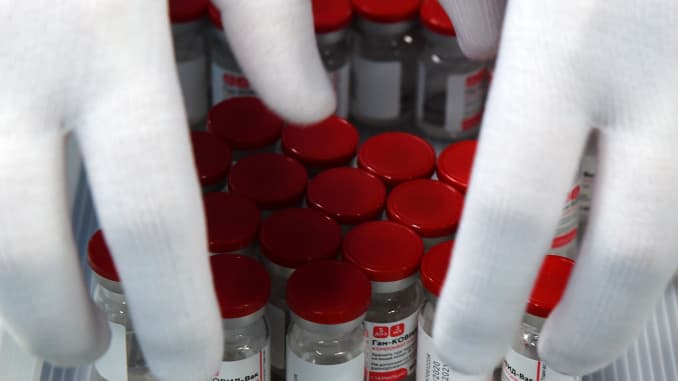 Cooperation between vaccine makers will increase in 2021, according to the head of Russia’s sovereign wealth fund, who welcomed the recent announcement of a combined trial for the two candidates being developed by Russia and the U.K.

“I think next year will be the era of vaccine cooperation rather than vaccine competition,” Kirill Dmitriev, the chief executive of the Russian Direct Investment Fund (RDIF) which backs the country’s Covid vaccine called “Sputnik V,” told CNBC Thursday.

Last Friday, British pharmaceutical giant AstraZeneca said it would soon start work with Russia’s Gamaleya Institute to investigate whether their two jabs could be successfully combined.

RDIF said clinical trials of AstraZeneca’s vaccine in combination with its own would begin by the end of December. Dmitriev told CNBC Thursday that the tie-up was a “great example of partnership on vaccines.”

“I think the world should focus on partnership rather than competition because we need all vaccines to be successful.”

“We believe that all of the vaccines out there are great, and will have great results,” he added.

For its part, AstraZeneca (whose vaccine was found to have an average efficacy of 70.4%, based on the pooling of two dosing regimens in late-stage clinical trials) said in a statement that “being able to combine different Covid-19 vaccines may be helpful to improved protection and/or to improve vaccine accessibility. This is why it is important to explore different vaccine combinations to help make immunisation programmes more flexible.”

Russia said earlier this week that data from the third and final control point in the late-stage clinical trial of its vaccine showed that its candidate has an efficacy rate, at preventing Covid infection, of 91.4%.

Dmitriev said the tie-up with AstraZeneca could help “to improve the efficacy of the AstraZeneca vaccine.”

He believed other vaccine makers would also start cooperating to check for “the interoperability of different vaccines.”

There has been international skepticism over Russia’s vaccine given the fact that regulators in the country approved it (back in August) before late-stage clinical trials had even begun.

Data is yet to be released from clinical trials either. On Monday, Russia’s vaccine creators said that trial research data “will be published by the Gamaleya Center team in one of the leading international peer-reviewed medical journals” but did not say when this might be.

Russia has repeatedly said that criticism of its vaccine is due to “information warfare” and Russophobia. Last week, a spokesman for Russia’s defense ministry said there had been a “smear campaign” against Russia’s vaccine, news agency TASS reported.

The collaboration with AstraZeneca is all the more interesting given that the U.K., U.S. and Canada accused Russia of backing hackers that were attempting to steal coronavirus vaccine research. Russia vehemently denied the hacking claims.

Trump may punish China — but it won’t be very damaging,...