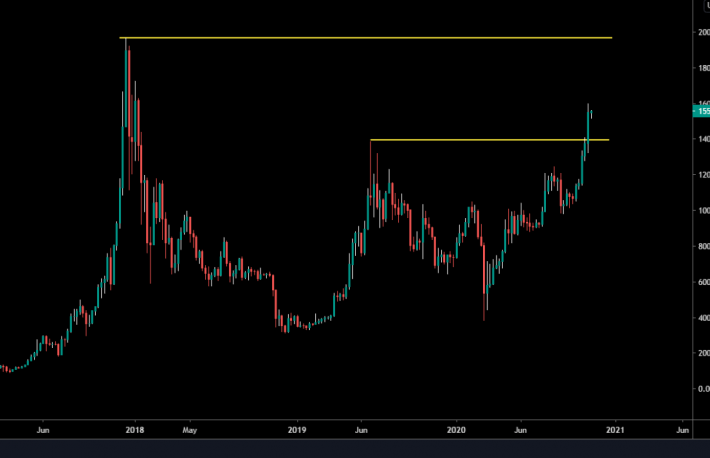 Bitcoin (BTC) made a weekly close above 2019’s peak price, toppling the final technical barrier on the road to a potential new all-time high.

Notably, that level marked the last major resistance ahead of a possible continued rally to $20,000, bitcoin (BTC, -1.89%)‘s lifetime high reached in December 2017.

Bitcoin jumped over 12% in the week ended Nov. 8, confirming a five-week winning run, the longest since April.

The price rally has been largely attributed to optimism generated by the recent disclosure of bitcoin investments by several public companies, including Square and MicroStrategy.

Further, in a sign of confidence in the market rally, bitcoin miners, who predominantly operate with cash, are looking to sell off more coins.

On Sunday, nearly 1,129 BTC were moved from miner wallets to cryptocurrency exchanges. That’s the biggest single-day outflow since December 2019, according to data source Glassnode.

Miners have run down inventory by 2,647 BTC over the past seven days by selling more than they mined, according to data source ByteTree.

This typically occurs when miners feel the market has the strength to absorb their extra supply; conversely, they tend to hoard when the market looks weak.

Such caution is needed because sales by miners, along with institutional investors, have the biggest influence on price, and mining profitability is positively correlated with the cryptocurrency’s price.

Meanwhile, Sui Chung, CEO of CF Benchmarks, said miners could be taking some price risks off the table by using their capital to lock in power prices before the northern hemisphere winter sets in.

All these things considered, the recent rally looks to have legs.

That said, bitcoin may consolidate or retracing toward the former resistance-turned-support at $13,880 before extending the bull run.

Technical indicators on both the daily and weekly charts are reporting overbought conditions.

Heusser added that some advanced traders are starting to rotate a portion of their bitcoin gains into alternative cryptocurrencies, many of which have suffered 50%-80% losses over the past two months.

At press time, bitcoin is trading largely unchanged on the day near $15,510, according to CoinDesk’s Bitcoin PriceIndex.