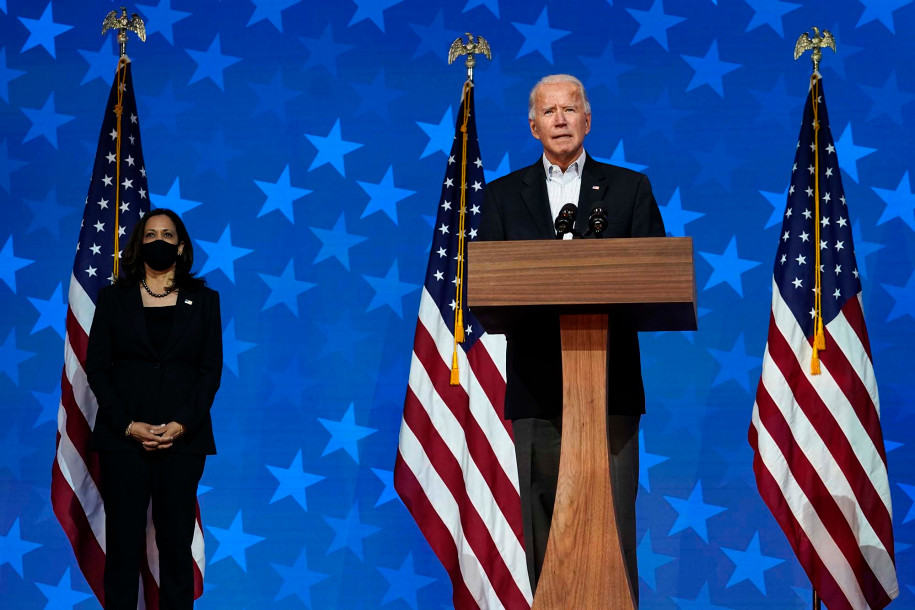 Joe Biden isn’t officially president-elect yet, but it seems clear he will prevail.

We applaud the sentiments of his Saturday-night victory speech. “I pledge to be a president who seeks not to divide but to unify,” Biden vowed. And: “I’m a proud Democrat, but I will govern as an American.”

More lines we liked: Those in the opposition “are not our enemies. They are Americans.” Indeed, “Let this grim era of demonization in America begin to end here and now.” And: “It’s time to put away the harsh rhetoric, lower the temperature, see each other again, listen to each other again.”

Veep-to-be Kamala Harris hit the same point as she introduced him, saying he’ll be a leader “for all people.”

We hope this means that he will govern as the moderate, and pull back from the positions he took to keep the AOC-Bernie wing on board through Election Day.

And that he’ll set a tone that encourages his supporters to drop the venom and conspiracy-theorizing that’s grown dominant on the left, especially these last four years.

The electorate spoke. They may have elected Biden, but they rejected radical ideas such as the Green New Deal. Republicans added seats in the House, and so far lost only one GOP senator.

Pending the runoff voting in Georgia, Mitch McConnell may well remain the Senate majority leader. Even if Chuck Schumer’s dreams of that job come true, Democrats will lack the mandate for all the pack-the-Supreme-Court visions they presented during the campaign — visions that help explain why they fell so short of that “blue wave” they expected.

Yes, one Biden campaign official, Kate Bedingfield, insisted Sunday that he’ll stick with the “progressive and aggressive agenda” reflected in his platform.

But we suspect he may listen more to the likes of Rep. Jim Clyburn, who brought him vital support at a key moment in the primaries: Clyburn revealed how much he and the late Rep. John Lewis worried that all that “defund the police” thinking would derail the Black Lives Matter movement into a radicalism that won’t fly with the American people.

We also hope Biden will think carefully before abandoning Trump’s foreign policy wholesale. He’s already said he won’t move the US Embassy back out of Jerusalem; he’d be wise to more broadly embrace the new Middle East that Team Trump wrought — rather than reviving President Barack Obama’s appeasement of the regime in Iran.

Notably, Biden backed off his extreme anti-fracking vows in recent months, realizing the US economy can’t afford to sacrifice its prospects for growth post-pandemic. He should apply that logic to his entire climate-change plan, and avoid crucifying the American working class on a cross of anti-carbon.

As for his No. 2: We suspect he tapped Kamala Harris because he saw an underlying streak of pragmatism in a woman who, after all, used to be a tough-on-crime prosecutor. She’s no longer playing only to far-left-leaning California voters, but to an essentially moderate national electorate.

Harris deserves congratulations, too, for breaking three glass ceilings in a single victory. She was surely right Saturday evening to say, “Every little girl watching tonight sees that this is a county of possibilities.”

It’s now up to Biden and Harris to unite a bitterly divided nation, pull it through the end of the pandemic and revive a suffering economy. The voters were pretty clear: They want a calm, steady ship, a return to normalcy after the coronavirus horrors and four rocky Trump years.

“Let’s give each other a chance,” Biden said Saturday. We’re up for that. He has his work cut out for him. We wish him well — as all Americans should.