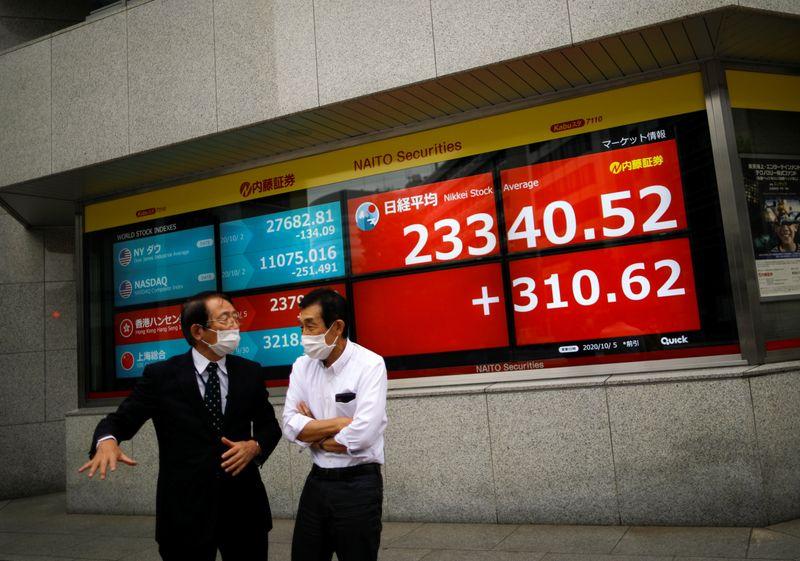 Global stocks and bond yields rose on Wednesday as Washington moved closer to agreeing a coronavirus stimulus package, pinning the dollar at its lowest for a month.

The MSCI world equity index .MIWD00000PUS, which follows shares in nearly 50 countries, gained 0.1%, buoyed by a 0.5% gain for Asia-Pacific shares outside Japan .MIAPJ0000PUS.

Wall Street was also set for gains, with U.S. stock futures EScv1 up 0.3%.

European shares were however dragged down by the healthcare .SXDP and real estate .SX86P sectors. The broad Euro STOXX 600 .STOXX fell 0.2% in early trading, with Paris .FCHI and London .FTSE shares down 0.2% and 0.4% respectively.

The White House and Democrats in the U.S. Congress moved closer to agreement on a new coronavirus relief package as President Donald Trump said he was willing to accept a large aid bill despite opposition from his own Republican Party.

With just two weeks until the U.S. presidential election, Trump signaled a willingness to go along with more than $2.2 trillion in new COVID-19 relief, a figure Democrats have been pushing for months.

In response, U.S. Treasury yields hit a four-month high and the yield curve steepened as expectations grew for more fiscal spending. Investors also sold benchmark euro zone debt, with German Bunds DE10YT=RR rising to their highest for a week at -0.571%.

The moves in stocks and bonds highlight how importantly new stimulus is viewed for the U.S. and global economies, said Hugh Gimber, global market strategist at J.P. Morgan Asset Management.

“Everyone knows that more stimulus needs to come through,” he said, cautioning that any package may struggle to pass the Republican-controlled Senate. “But markets are perhaps not always right to be bouncing on speculation.”

Still, bond investors are pricing in a stimulus package, either by the election or early next year should the Democrats win the White House and Senate, Deutsche Bank analysts wrote.

The chances of such a “Blue Wave” have risen notably in the last 3 weeks, they said.

DOLLAR DOWN, YUAN UP

The dollar hit a one-month low against a basket of currencies =USD as optimism over a pre-election U.S. stimulus package bought riskier currencies.

The greenback was last down 0.2% at 92.849, with the doubts over whether any package can pass the Republican-controlled Senate kept the dollar from breaching last month’s two-month lows.

Underlying the potential for the Senate to dash investors’ hopes for more stimulus, a senior Senate Republican aide told Reuters that majority leader Mitch McConnell has privately told his fellow Republicans that he did not favour a deal before the Nov. 3 elections.

Still, underscoring appetite for risk among currency traders, the Chinese yuan hit a more than-two year top as the world’s No.2 economy rebounds strongly from the pandemic, dragging riskier Asian currencies along with it.

The yuan CNY= was up 0.4% at 6.6480, taking gains against the dollar this year to around 4.5%. Its rise helped lift the Australian dollar AUD=, weighed down by expectations of a rate cut in November, from Tuesday’s three-week low.

Alternative assets also fared well. Bitcoin BTC=BTSP, which is often sought during periods of appetite for risk, climbed nearly 3% to break $12,000 for the first time since August and was not far off its highest this year.