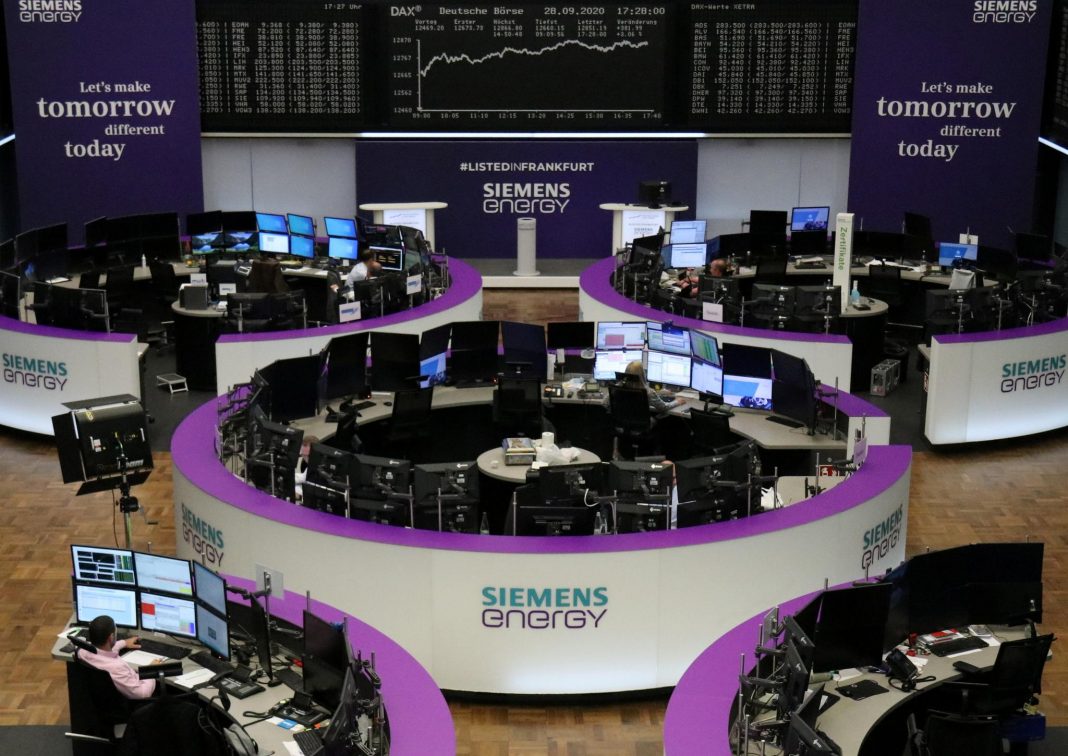 Renewed U.S. stimulus hopes lifted global markets on Thursday, though an all-day outage on Tokyo’s Nikkei and a Brexit legal row ensured a bumpy start to what could be an explosive fourth quarter.

Europe’s STOXX 600 index and the euro clocked 0.7% and 0.2% gains, respectively, as data showing the region’s ongoing economic recovery from its coronavirus slump helped traders claw back some of September’s heavy falls.

It was a wild ride for sterling. News that the European Union had launched a legal case against Britain for undercutting their earlier divorce deal sent it tumbling, only to then pinball higher on a Financial Times tweet that the two sides had made some progress in trade talks.

Elsewhere things were calmer. The dollar eased to a one-week low after robust U.S. data on Wednesday, with the stimulus hopes leading traders back to riskier currencies and pushing up Wall Street futures.

With U.S. elections, as well as the potential for a COVID-19 vaccine and a no-deal Brexit all lying ahead, markets are likely seeing the lull before the storm, according to Chris Dyer, Eaton Vance’s director of global equity.

“What I have been saying is that the equity markets are likely to move violently sideways in the next few months,” he said, though in 12 months the trajectory should be a brighter one of global recovery.

Asian trading saw a 0.4% rise on MSCI’s regional index, led by 1.1% and 1.5% gains in Australia and India. The day had been dominated, though, by the unprecedented technical problems at Tokyo Stock Exchange, the world’s third-largest stock market.

TSE President Koichiro Miyahara apologised for the all-day outage. He said the exchange had decided to suspend the full session because an early resumption could cause market confusion, but it planned to restart on Friday.

The timing is really just bad,” said Takashi Hiroki, chief strategist at brokerage Monex in Tokyo, adding that many market participants had been hoping to cash in on the overnight rise in U.S. markets.

The meltdown also coincided with the release of the Bank of Japan’s closely watched tankan corporate survey, which showed business sentiment improved from a decade low.

“The market was robbed of that chance,” Hiroki added.

COVID-19 vaccine developments underpinned market sentiment too, despite rising infection rates in both Europe and the United States and a global death toll now above 1 million.

Back in the currency markets, the dollar’s slip after its best month since July 2019 lifted the Australia’s trade-sensitive dollar 0.5% to $0.72 and Mexico’s peso more than 1%.

“The U.S. election is clearly a dollar (sensitive) event as is a stimulus bill,” said Simon Fennell at William Blair Global Equity, adding that both had the possibility to drive the dollar weaker.

After the “hard stop” caused by forced lockdowns, the global economy was hopefully “coming out the other side” he added. “That is why these discussions on second lockdowns are so important”.

In commodities, gold gained 1% after its worst month since November 2016 while oil prices were subdued after their 10% September drop, with U.S. crude futures at $39.91 per barrel and Brent futures at $42.33 a barrel.

“Increasing supplies from OPEC+ will be risking the rebalancing effort as the market is still grappling with weak demand,” ANZ Research said.