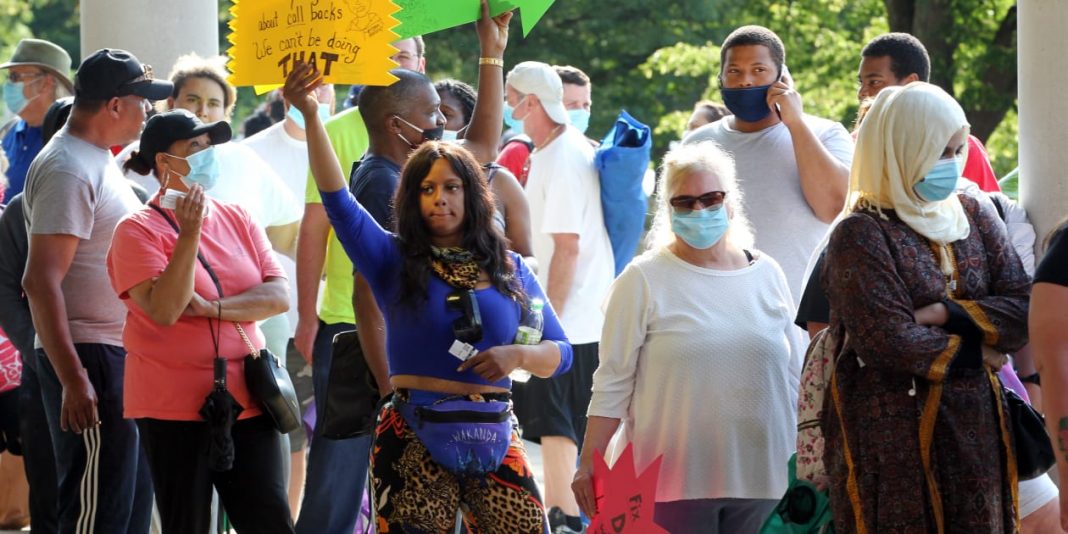 Economists surveyed by Dow Jones had been expecting 850,000. The weekly total represented a decline of 36,000 from the previous week’s upwardly revised 870,000, according to seasonally adjusted numbers.

This was the fifth consecutive week that claims were under 1 million after staying there for five months following the Covid-19-related economic shutdown in mid-March. However, the total is still well above anything the U.S. has seen since before the crisis.

Continuing claims provided some better news, with those collecting benefits for at least two weeks falling by 980,000 to 11.77 million. The continuing claims number runs a week behind.

However, the overall trend remains stubbornly high, with the four-week moving average of first-time claims edging lower by just 11,750 to 867,250. Prior to the pandemic, weekly claims had been around 200,000.

Moreover, the jobs number are somewhat distorted by California announcing it is taking two weeks off from processing claims as it looks to “implement fraud prevention technology,” the Labor Department said.

While the third quarter is likely to see unprecedented growth in GDP after the historically sharp slowdown in Q2, “weekly jobless claims are still too high to call the recession over,” said Chris Rupkey, chief financial economist for MUFG Union Bank.

The White House and Congress continue negotiations for another round of stimulus that likely would include more assistance for those workers who remain displaced due to the coronavirus-fueled shutdowns.

Workers had been receiving $600 on top of what their normal benefits before the CARES Act expired, then $300 afterwards due to an executive order from President Donald Trump.

But the expiration of those benefits has resulted in a sharp decline in personal income, which fell 2.7% in August, according to a separate report Thursday. Personal consumption expenditures rose 1% for the month, the slowest gain in four months.

Core personal consumption expenditures, which the Federal Reserve uses as its inflation gauge, rose 1.6% year-over-year in August, below the central bank’s 2% goal.

Those collecting benefits under the Pandemic Unemployment Assistance program edged higher to 650,120. The program provides payments to those not normally eligible for benefits, such as freelancers and independent contractors.

The total for all those collecting benefits under the various government programs rose by nearly half a million to 25.53 million for the week ended Sept. 12.

More than two-thirds of individual states reported declines last week, according to unadjusted data. The biggest drops came from Florida, with 9,668, and Texas, with 8,353.

The claims number comes a day before the closely watched nonfarm payrolls report. The Labor Department is expected to report a jobs gain of 800,000 for September, which would represent a slowdown from August’s 1.37%, according to Dow Jones.

The unemployment rate is forecast to tick down two-tenths of a percentage point to 8.2%.

When the U.S. sneezes, the world catches a cold. What happens...