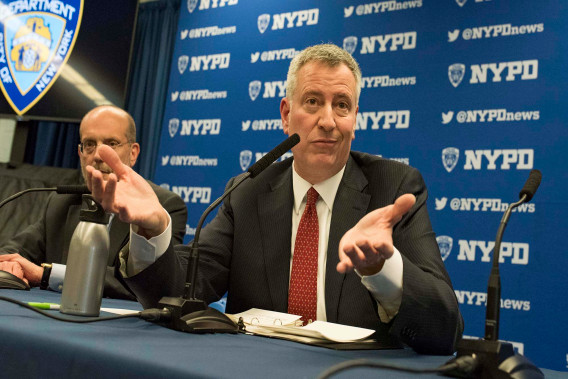 ‘If he were serious about it, he would have started in the first year of his first term.’

Will Mayor de Blasio’s plan to close Rikers be the left’s Second Avenue subway — something all public officials favor but never accomplish? Hizzoner will leave office next year with no progress on his “four borough jails” plan. His successor will care less.

In his “Last Subway” book, Philip Plotch explains why, since 1903, generations of New York pols have promised a Second Avenue subway but never delivered. Yes, we finally have three East Side stops. But the original plan was from the East Bronx to lower Manhattan.

The political calculus is simple: Because no one mayor or governor could ever hope to take credit for completing such a project within his term in office, no mayor or governor has made it a priority. Who wants to take on a headache only to see his successor claim the accolades?

De Blasio devised a shortcut: taking the credit first. “The era of mass incarceration is over,” he said last October, when the City Council passed the plan to build one jail apiece in lower Manhattan, Kew Gardens, the south Bronx and central Brooklyn, thus shuttering the island jails. Over!

Well, the era of mass incarceration has long been over. As the Mayor’s Office of Criminal Justice notes, “both crime and the use of jail have been falling steadily in New York City for 20 years,” with incarceration down 51 percent since 1999, far lower than other US cities.

Yet the anti-jails movement seized on Rikers as a symbol — and the mayor obliged.

Closing Rikers, though, would be the most ambitious infrastructure project the city has managed in modern history: $9 billion to build four high-rise jails in four dense neighborhoods by 2026. So if he were serious about it, he would have started in the first year of his first term, not halfway through his second.

Now the plan has suffered two setbacks. Last week, a state judge upheld a suit filed against the Chinatown jail by a grassroots group, Neighbors United Below Canal. NUBC alleged that the city abused the state’s environmental process in doing its study for one potential downtown site, then abruptly switching to another location.

The city also failed to look at the public-health impacts, as the law requires, “purportedly completed environmental . . . review . . . before the project had even been designed” and failed to consider alternatives.

The judge decided that the city had committed an “error of law.” Two similar suits against the Bronx and Queens jails are pending.

Contrary to popular belief, it isn’t easy to stop a project with a lawsuit. The city was sloppy. “It’s not rocket science,” says Karen Mintzer, NUBC attorney. Now, the ruling causes a delay, at best.

Except the city has already delayed. In this year’s budget, de Blasio slashed the project by $500 million and delayed some spending as late as 2029. As the council’s finance director noted, “Continued delays of these projects into years beyond the current administration decrease the chances of these jails being built.”

The mayor who will cut nothing immediately cut this.

The longer the city dithers, the more facts intrude. The new jails will have a capacity of just 3,544 beds. Even as the city has released inmates during the pandemic, the jail population still stood at 3,981 in late May. Since then, violent crime has risen, including crimes allegedly committed by recently ­released arrestees.

Then there is a risk the city never considered in its environmental review: the probability that borough-based jails would attract sustained protest. A new jail in lower Manhattan would be a magnet for the “occupy and vandalize” crowd. Already, engineering firms are wary of being associated with a high-profile jail.

And it’s even less wise than it was last year to destabilize stable neighborhoods, when the city must retain its tax base.

Now the jails plan has lost the only thing going for it: a political champion. Corey Johnson, the City Council speaker who approved it, had a stake. But he is no longer running for mayor.

The next mayor isn’t going to want to spend a first term, and then some, focusing on the marquee infrastructure of the last mayor.

The best outcome is the alternative de Blasio refused to consider: modern jails at Rikers. The more likely outcome is that the inmates keep waiting, just as the East Bronx is still waiting for its subway.

Nicole Gelinas is a contributing editor to the Manhattan Institute’s City Journal.