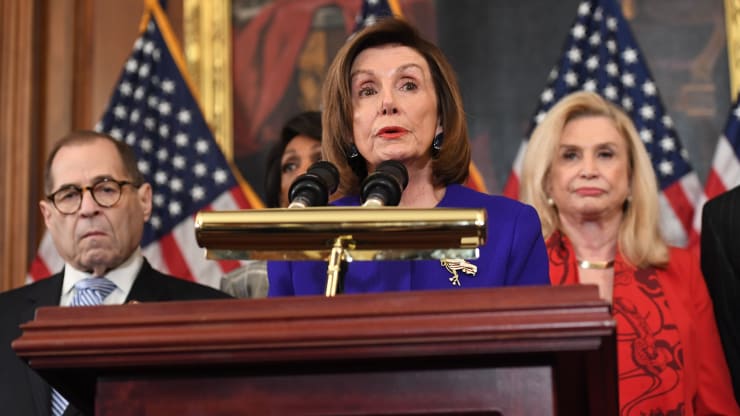 If you’re concerned that your fellow Americans may be worried about a potential hit to their pocketbooks from impeachment of President Donald Trump, the most recent consumer confidence reading could lead you tospend more money and much less time focused on whether the president will be removed from office.

The consumer has been the backbone of the long economic expansion, and after a dip in recent months that many experts attribute to trade war and tariff concerns, consumer confidence is back near record levels in December, according to the closely watched University of Michigan survey. Even though the Michigan index took its biggest tumble since 2012 in August and stayed down through the fall, staying high has been the general trend since 2017. In 30 of the past 35 months, the Michigan Sentiment Index was 95 or higher, a level of optimism that is second only to one previous period — the presidency of Bill Clinton.

“Although impeachment proceedings occurred in both time periods, in the earlier period it did not cause an overall loss in confidence,” U-M economist Richard Curtin, director of the surveys, noted in a recent release.

Virtually no consumer (1%) mentioned impeachment in response to any Michigan survey question in early December, where during the confidence dive in August 1 in 3 consumers mentioned tariffs.

On Friday morning, the House Judiciary Committee voted to advance the articles of impeachment to the House floor for a full vote. China also said it had agreed to text of a trade deal, and stocks were bouncing around in early trading. Through Thursday’s close the S&P 500 was up 26.4% for 2019. The Dow Jones Industrial Average and Nasdaq are up 20.6% and 31.4%, respectively, this year.

Impeachment headlines may be compelling and anxiety-inducing for many, but American households feel good about their finances, with 54% telling Michigan that their finances had recently improved. There have only been nine other surveys in the past half century that recorded a higher percentage.

Lynn Franco, senior director of economic indicators and surveys at The Conference Board, said impeachment has not had any discernible impact on consumer confidence or spending based on the responses it receives to surveys. What has caused some recent softness in its consumer survey numbers is just how good the economy and consumer confidence have been.

“What we have seen is a plateauing in consumer confidence levels. We hit 18-year highs in Fall 2018 and we’ve sort of been moving sideways. I think it’s as good as it gets,” Franco said. “We could go up or down a little bit … but consumers are still confident.”

She said any dips in the past year that can be tied back to politics have been trade related. “Trade is the political issue that directly hits consumers because of their wallets,” Franco said.

Consumer confidence remains much higher than CEO confidence, which reached its lowest level in a decade in October, according to The Conference Board.

Political affiliation is playing a role in Americans’ level of economic confidence, but conditions have been so strong most Americans are confident to some degree.

A recent CNBC and Acorns Invest in You survey found that only 21% of Americans say they are worse off today than they were in 2016 amid a historic low in unemployment, strong consumer spending and a record stock market. The percentage of Americans who say they will vote on the economy rises with political party taken into account. Among Republicans, 42% say the economy will be the main issue in 2020. That figure drops to 27% for Democrats.

Even though 79% of all Americans say it is important to support a presidential candidate whose policies will help improve “your own personal financial situation,” even among Democratic voters surveyed by CNBC and Acorns, less than 50% believe a Biden, Warren or Sanders presidency would improve their personal financial situation. But when asked if a Warren or Sanders presidency would make them more fearful about their personal finances than a second term for Trump, more than 60% of Republicans said it would, while only about 20% of Independents agreed and 13% or less of Democrats.

“We’ve had such a great economy, and it’s been great for a long time, so until it changes, people won’t have a reason to think or see things differently,” Laura Wronski, senior research scientist at SurveyMonkey, recently told CNBC.

The partisan divide exists among small business owners on Main Streets across the U.S. in particular when it comes to impeachment. The Q4 CNBC/SurveyMonkey Small Business Survey finds that Republican business owners are much more likely to say impeachment would be bad for business than either Democrats or Independents.

“At no other time in the past half century have the divisions in economic expectations been as wide among consumers as well as between consumers and business firms,” Curtin stated in the recent Michigan consumer survey release.

The strong impact of partisanship on economic expectations has widened in the past few months, and in the past few years. The average gap between Democrats and Republicans was 18.7 points in the Obama administration and 41.6 points since Trump took office.

“The economic expectations of Democrats and Republicans are clearly exaggerated,” Michigan found. “Independents, who represent the largest group and are less susceptible to maintaining partisan views, hold very favorable expectations, indicating the continuation of the expansion based on consumer spending.”

Pew Research surveys corroborate the extent to which political partisanship bleeds into everything. It found in a 2017 survey that 32% of Americans now take a roughly equal number of conservative and liberal positions, while as recently as 2015, 38% had this mix of values, and 49% did in 1994 and 2004.

A Pew survey on impeachment from October found, not surprisingly, a deep partisan divide in attitudes among Americans.

Wall Street experts who have studied the history of modern impeachments and the market note that the data is limited by the two impeachments (Clinton and Nixon) that we have to work with, and it is difficult to draw firm conclusions. The Nixon era economy was working through the aftermath of the 1973 Saudi oil embargo and high oil prices. Clinton had a better economy under his watch, even though issues like the Asian financial crisis and the implosion of the hedge fund run by Nobel laureates Long-Term Capital Management had sent some fears through the global economy.

The S&P 500 rallied 28% from January 1998 as the first reports of Clinton’s affair with White House intern Monica Lewinsky emerged, through the Senate acquittal. The S&P was 39.2% higher a year after the impeachment process began against Clinton and was down 33.4% a year after proceedings were started again with Nixon.

″The short answer is that it is hard to untangle how political uncertainty moves capital markets relative to other drivers,” said Nicholas Colas, DataTrek Research co-founder. “One can ponder how much the macro backdrop informed each president’s approval ratings and susceptibility to impeachment/removal, of course. There may be more of a feedback loop here than people realize.”

Like many market watchers, Colas looks to prediction markets, such as PredictIt odds, to assess this issue.

“The odds that President Trump will remain in office through his first term sit at 81% just now. They dropped after the Ukraine call issue first came up but have been rising over the last week or two. I think markets agree with that assessment and are largely ignoring the possibility of Senate conviction or resignation,” Colas said.

“I don’t think the impeachment story has a lot of impact on consumer confidence,” said Gad Levanon, chief economist at The Conference Board. “It probably won’t change the identity of the president. He will not be removed, regardless of what happens in House, and even if he was, I’m not sure it is clear what would be the impact on the economy.”

He said actual consumer spending, though, has been declining in recent months. Retail sales came in at a level that was much weaker than expected on Friday, and Levanon said while that is a volatile number, it has been trending down in recent months and needs to be watched as an early warning sign.

But as of now, “the ability to spend is there — employment is strong, and wages are growing, and stock prices going up. There has not been any deterioration in income growth, so it is more on the side of the willingness to spend,” Levanon said.

The majority of Americans may not be in the stock market outside of retirement plans, but the record stock market indicates that investors are not worried about impeachment.

“Investors don’t care about the impeachment process,” said Mitchell O. Goldberg, president of Melville, New York-based investment advisory firm ClientFirst Strategy. “They’re comfortable with knowing that every single geopolitical event that has rocked the stock market has passed and given way to new highs. This time around is no different.”

The U.S.-China trade war has been the biggest source of uncertainty for the markets, and on Thursday reports of a trade agreement sent stocks higher.

On Wednesday the Federal Reserve indicated that it may be less likely to cut rates again, but it has already provided the market with the cuts that fueled the latest phase of the bull market run.

“The Fed is on the sidelines, interest rates are low, the Fed will cut rates if the economic outlook weakens, inflation is still below the Fed’s target, and unemployment is low. This is freakin’ Goldilocks for stocks,” Goldberg said. He added that if some of the China trade obstacles with a Phase One of the trade deal are worked out, “it’s even more power to the stock market. Impeachment isn’t an economic event.”

Though Goldberg said that even an unexpected impeachment result may not matter that much. “I think investors may feel that they’ve gotten out of Trump everything they can. So if he is ousted from the presidency, it won’t be relevant to stocks. But unless some bombshell comes out in the next few weeks, no one of sound judgement believes Trump will be removed from office by the Senate. So why bother getting out of stocks?”

“Imbuing politics into investing is generally a bad idea,” said Douglas Boneparth, a member of the CNBC Advisor Council and president of wealth management firm Bone Fide Wealth, which focuses on millennials, young professionals and entrepreneurs. “It’s short-term thinking that distracts us from long-term investing. If you’re reacting to this, it’s likely because you don’t have a plan you can stick to in place.”