Home Economy US housing starts rebound; building permits at highest level in over 12... 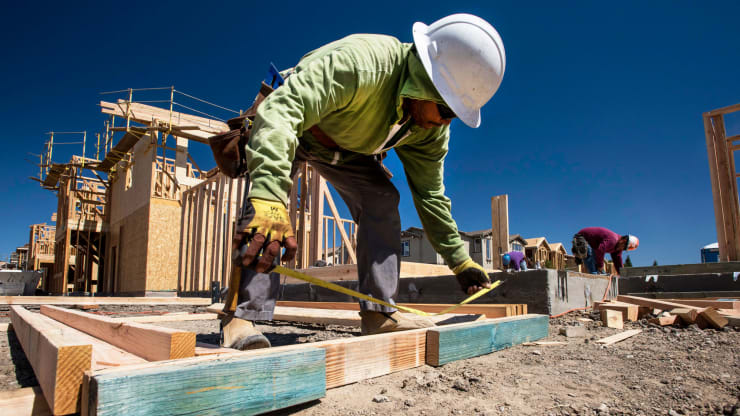 U.S. homebuilding rebounded in October and permits for future home construction jumped to a more than 12-year high, pointing to strength in the housing market amid lower mortgage rates.

The report from the Commerce Department on Tuesday also showed an increase in home completions and the stock of homes under construction, which could help to ease a supply squeeze that has plagued the housing market.

“This is an important report for future homebuyers since one of the largest deterrents to entering the market right now is the lack of robust housing options,” said Bill Banfield, executive vice president of Capital Markets at Quicken Loans in Detroit.

The housing market, the most sensitive sector to interest rates, has perked up in recent months, catching up to the Federal Reserve’s easy monetary policy stance, which has pushed down mortgage rates from last year’s multi-year highs.

The sector, which accounts for about 3.1% of the economy, however, continues to be hobbled by land and labor shortages.

A survey on Monday showed confidence among homebuilders hovering near a more than 1-1/2-year high in November. Builders, however, complained about “a lack of labor and regulatory constraints,” adding that “lot shortages remain a serious problem, particularly among custom builders.”

U.S. financial markets were little moved by the data.

Housing starts shot up to a more than 12-year high in August. But momentum could slow, with mortgage rates backing up in the last two months.

The Fed last month cut rates for the third time this year and signaled a pause in the easing cycle that started in July when it reduced borrowing costs for the first time since 2008.

While fears of a recession have ebbed in recent months amid a de-escalation in trade tensions between the United States and China, the economy is still slowing amid a deceleration in consumer spending and persistent weakness in business investment and manufacturing.

The 30-year fixed mortgage rate is currently at 3.75%, still below its peak of 4.94% in November 2018, according to data from mortgage finance agency Freddie Mac.

Residential investment rebounded in the third quarter after contracting for six straight quarters, the longest such stretch since the 2007-2009 recession.

Single-family homebuilding, which accounts for the largest share of the housing market, increased 2.0% to a rate of 936,000 units in October, the highest in nine months. Single-family housing starts rose in the West, Midwest and the South last month. They fell in the Northeast.

Housing completions vaulted 10.3% to 1.256 million units last month. Realtors estimate that housing starts and completion rates need to be in a range of 1.5 million to 1.6 million units per month to close the inventory gap.

The stock of housing under construction gained 0.1% to 1.161 million units, the most since January.