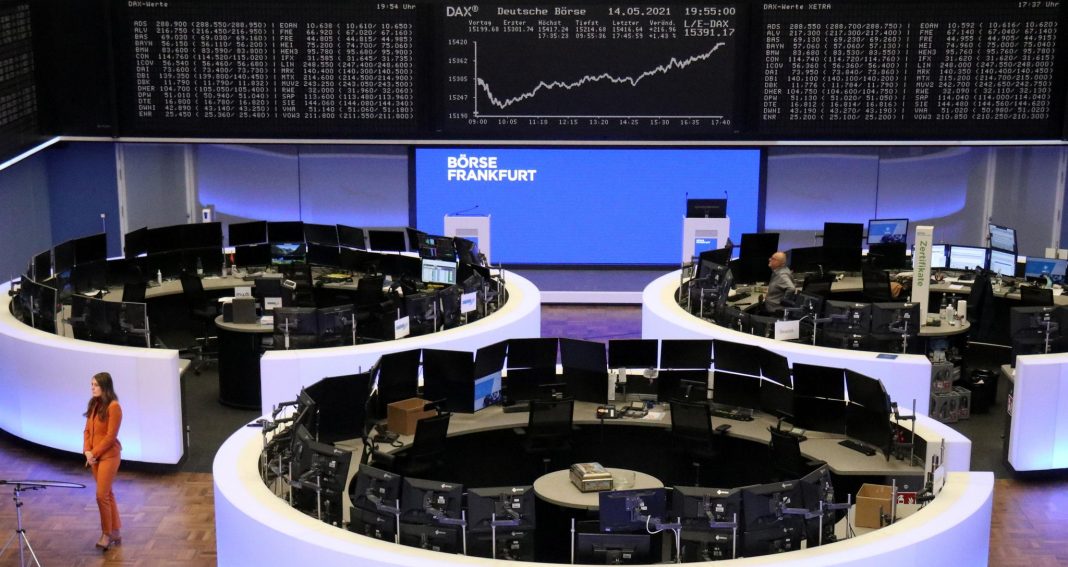 Stocks struggled for momentum on Monday as investors awaited key U.S. inflation readings for guidance on monetary policy, while bitcoin rebounded from its hammering on news of China’s clampdown on mining and trading of cryptocurrencies.

European stocks were 0.1% firmer, after gaining support from Friday’s data showing accelerating business growth in Britain and the euro zone for April. ECB President Christine Lagarde’s assertion the same day that it was still too early for the bank to discuss winding down its 1.85 trillion euro stimulus scheme had also lent support.

Markets in Austria, Denmark, Hungary, Norway, Switzerland and Germany were closed for a holiday.

“The euro zone and the UK are starting to boom as their economies reopen,” Bank of Singapore chief economist Mansoor Mohi-uddin said in a note.

Sovereign dollar bonds issued by Belarus shed as much as 2 cents after Belarusian authorities on Sunday forced an airliner to land and arrested an opposition-minded journalist who was on board, drawing condemnation from Europe and the United States.

After the strong growth shown by Friday’s surveys of the global services sectors, all eyes will be on U.S. personal consumption and inflation figures this week.

A high core inflation reading would ring alarm bells and could revive talk of an early tapering by the U.S. Federal Reserve.

The diary has a crowd of Fed speakers this week, including influential Fed Board Governor Lael Brainard, and markets will be keen to hear if they stick to the script on being patient with policy.

As a result, managers had pushed into commodities and late-cyclicals, where overweight positions were close to 15-year highs, while the single most crowded trade was Bitcoin.

“With such bullish views on growth and inflation, the risk for investors is that growth slows and inflation proves temporary,” BofA analysts said in a note.

“Also, Tech, viewed as crowded fairly recently, is now back to an underweight and would likely benefit if inflation fears ebbed.”

It was hurt in part by China’s crackdown on mining and trading of the largest cryptocurrency as part of ongoing efforts to prevent speculative and financial risks.

The major currencies were staid in comparison, with the euro holding at $1.2197 after repeatedly failing to clear chart resistance around $1.2244 last week.

The softness of the dollar combined with concerns about inflation and the wild volatility of cryptocurrencies to put gold back into favour. The metal was last at $1,881 an ounce, after reaching its highest since January.

“Gold’s recovery has been associated with the strong rally in some parts of the commodities complex, increasingly represented by agriculture, metals and transport indices this year, and an eight-year high in U.S. 10-year inflation expectations.”

Oil prices edged higher as a storm formed in the Gulf of Mexico and Iran said a three-month nuclear monitoring deal had expired, raising doubts about the future of indirect talks that could end U.S. sanctions on Iranian crude exports. [O/R]