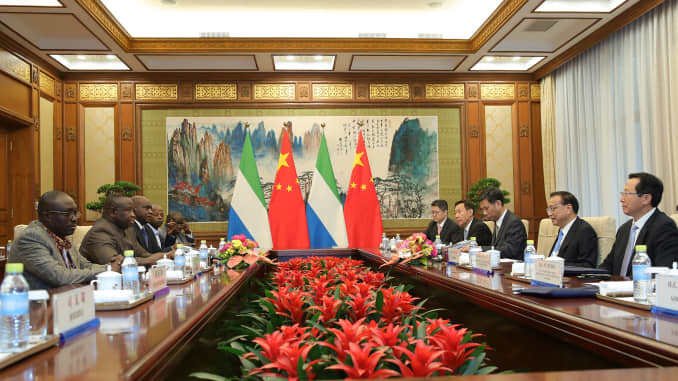 Sierra Leone has agreed to sell 250 acres of pristine beach and rainforest to China in a $55 million deal that would see an industrial fishing harbor built on the site.

The move has sparked outrage from conservationists, human rights and animal welfare groups and local landowners, who have said the project would “destroy pristine rainforest, plunder fish stocks, pollute the marine environment and five individual eco systems that are fish breeding grounds and support endangered bird and wildlife species.”

The details of the deal, first reported by the U.K.’s The Guardian newspaper, remain hazy. Local public policy research organizations the Institute for Legal Research and Advocacy for Justice (ILRAJ) and Namati Sierra Leone have written to the government requesting information on “plans to establish a fish harbour and carry out waste management operations at Black Johnson in the Western Area peninsula, a project funded by the Government of China.”

The groups are requesting copies of legally-mandated environmental and social impact assessments, along with the grant agreement between China and the Sierra Leonean government.

A press release from Minister of Fisheries and Marine Resources Emma Kowa-Jalloh on Monday contends that “the facility to be constructed is a Fish Harbour and not a Fish Mill as portrayed by the social media writers.”

“The objective of the Fish Harbour is to centralise all fishing activities. The government of Sierra Leone has been yearning for a Fish Harbour since the early 1970s, but could not actualise it due to the huge amount of money that is required,” Kowa-Jalloh said.

“With the new shift in government policy for the development of the fisheries sector, the Chinese government has given a grant of US$55m to build this platform.”

The release also asserts that Black Johnson was “the most suitable place for the construction of the facility in terms of bathymetry, social safeguards (minimum resettlement cost) and environmental issues.”

Kowa-Jalloh said the Ministry of Finance had set aside a compensation package of 13.76 billion leones (around $1.34 million) for landowners, and insisted that the sale of the land was intended to “ensure the regular supply of fish” to the local market.

In a tweet Tuesday, Greenpeace Africa condemned the move, arguing that “fishing communities in West Africa are already experiencing the effects of environmental degradation and the climate crisis.”

“Permitting more extractive activities in this region will only worsen the situation,” the organization added.

The growth of China’s overseas presence in infrastructure and economic development projects in Africa and beyond has been well-documented in recent years, but often such initiatives are financed through loan agreements.

Professor Katharine Adeney of the University of Nottingham Asia Research Institute noted some apparent similarities between the Sierra Leone deal, given the current available details, and one portion of the China-Pakistan Economic Corridor.

“The majority of the CPEC projects in Pakistan have been financed through loans. However, the development of Gwadar port, Gwadar International Airport and many ‘hearts and minds’ projects in the area are scheduled to be paid for by Chinese grants,” she told CNBC on Tuesday.

Adeney noted that this may also be the case here, though Sierra Leone does not feature on the maritime “belt” of China’s Belt and Road Initiative (BRI), the global infrastructure development strategy adopted by Beijing in 2013.

The Gwadar project in Pakistan also faced staunch opposition from local fishermen displaced by the project, while concerns have been raised about whether the local labor force will be able to benefit from the project in the event of a sudden influx of workers from elsewhere in Pakistan or overseas.

“The development of Gwadar includes a lot of hearts and minds projects on paper (e.g. the development of a training center, expansion of a hospital), but very few of these have yet come to fruition. The whole area has been heavily securitized,” Adeney explained.

Local activists in Sierra Leone have decried the government’s lack of transparency in recent days as they seek clarity on the nature of the project. Robert Besseling, CEO of political risk consultancy Pangea-Risk, told CNBC on Tuesday that the opacity of the deal could end up “derailing it” or at least cause further resistance.

“Firstly, there is a lack of transparency over the Sierra Leonean government’s land equity and Chinese cash grant deal, which is raising concerns over potential corruption and could subject it to parliamentary probing,” he said.

“Secondly, any forced displacement of residents around the project site might be rendered unconstitutional based on current land rights provisions.”

The government argued at the time that there was no business case for the new airport outside the capital Freetown, and instead vowed to renovate its existing airport.

“The lack of financing opportunities during the pandemic may indicate that Sierra Leone is increasingly returning to China’s sphere of influence and is now seeking more Chinese lending for development and infrastructure projects,” Besseling added.