Home Economy Britain’s coronavirus vaccine approval could ‘set the pace for the rest of... 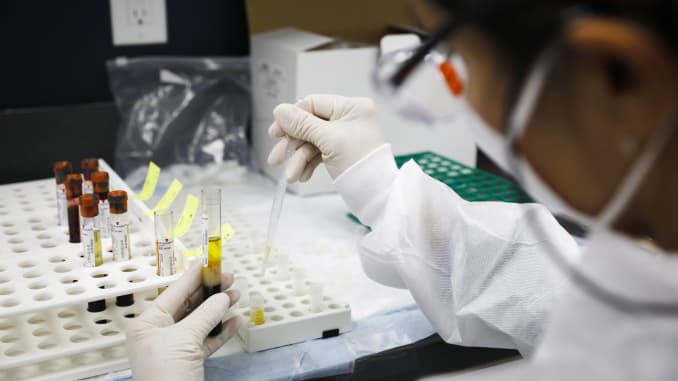 The U.K.’s decision to grant emergency approval to Pfizer and BioNTech’s coronavirus vaccine will likely lead other countries to quickly follow suit, according to one economist, with regulators in the rest of Europe and the U.S. yet to decide on the new shots.

The U.K. government announced Wednesday that it had accepted a recommendation from the country’s independent drug regulator, the Medicines and Healthcare products Regulatory Agency, to approve the vaccine, which was seen to be 95% effective at preventing Covid-19 infection in late-stage clinical trials.

The U.K. is the first in the world to formally approve the Pfizer vaccine, its CEO calling the decision a “historic moment” in the fight against the pandemic.

The decision is likely to spur regulators in the U.S. and continental Europe to conclude their assessments on the safety and efficacy of the available vaccine data sooner rather than later, experts noted Wednesday.

“The U.K.’s approval will be only one of many, but along with that of the U.S. Food and Drug Administration and the European Medicines Agency, it is likely to set the pace for the rest of the world — and for the other vaccines that are awaiting approval,” Ana Nicholls, managing editor of the Industry Briefing at The Economist Intelligence Unit, commented Wednesday.

“For the U.K., it means that the priority groups can now start to get vaccinations immediately: that includes healthcare workers and those in care homes (staff and residents) followed by other vulnerable groups — although given two doses are needed the effects won’t be felt until early next year.”

Pfizer and BioNTech only applied to the EMA for the conditional marketing authorization of its vaccine on Tuesday. If the authorization is granted, it could enable its use in Europe this month, although that could prove very ambitious given that the EMA said it would only complete its review of the vaccine by Dec. 29.

It also said it would conclude its review of Pfizer’s rival coronavirus vaccine, developed by Moderna and seen to be 94% effective at preventing Covid-19 infection, by Jan. 12.

For its part, the FDA said in late November that it had scheduled a meeting of its Vaccines and Related Biological Products Advisory Committee (VRBPAC) on Dec. 10 to discuss Pfizer and BioNTech’s request for the emergency use authorization of its vaccine, so a decision could be announced soon after.

Good news for the UK?

The U.K. has an agreement for 40 million doses of the Pfizer and BioNTech vaccine meaning that it will have enough doses to vaccinate around 20 million population (it’s a two-dose vaccine).

There have been some eyebrows raised at the speed of the U.K. regulator’s approval, however, with one EU lawmaker calling the decision “problematic” and “hasty.”

That was rebuffed by one expert who told CNBC that any regulator would scrutinize the available data before authorizing any vaccine candidate and that, in fact, the faster authorization process could become the norm in future.

“The regulators would not have approved this particular vaccine candidate if they were not happy with the safety profile of it, and also the apparent levels of effectiveness of it,” Michael Head, senior research fellow in global health at the Clinical Informatics Research Unit within the medicine faculty at the U.K.’s University of Southampton, told CNBC Wednesday.

“The regulators set up the guidelines for approval in advance, the manufacturing was done as much as possible in advance too, which doesn’t normally happen. So there are lots of things that have happened for the first time here that haven’t happened with the development of other vaccines or medicines. I think it may possibly be, to some extent, a model for how to work going forward (and) that we can do these things in a shorter period of time.”

Asked whether the authorization was specifically good news for the U.K., Head said “well, if you have it approved you can start to use it, so certainly here in the U.K. it’s good news for us. But the pandemic does not end globally until we vaccinate most of the world, so we do need rollout to everyone.”

The U.K. currently has the third highest number of cases in Europe after France and Spain, with over 1.6 confirmed infections, and the largest death toll in the region, with almost 60,000 fatalities due to Covid-19. Its economy is expected to be the one of the worst hit in Europe in 2020, with the World Economic Forum predicting a 9.8% slump in gross domestic product.

Whether the U.K. could gain a competitive edge by vaccinating earlier, as it could then open up greater parts of its economy sooner than other countries, remains to be seen and this will depend on the forthcoming rollout.

“The key, from a market perspective, is what does the vaccine allow to happen in terms of economies that open up — and companies get back to doing what companies do, and consumers doing the things they do — and some degree of normality in terms of profitability and earnings,” Mark Phelps, CIO of concentrated global growth at Alliance Bernstein, said to CNBC Wednesday.