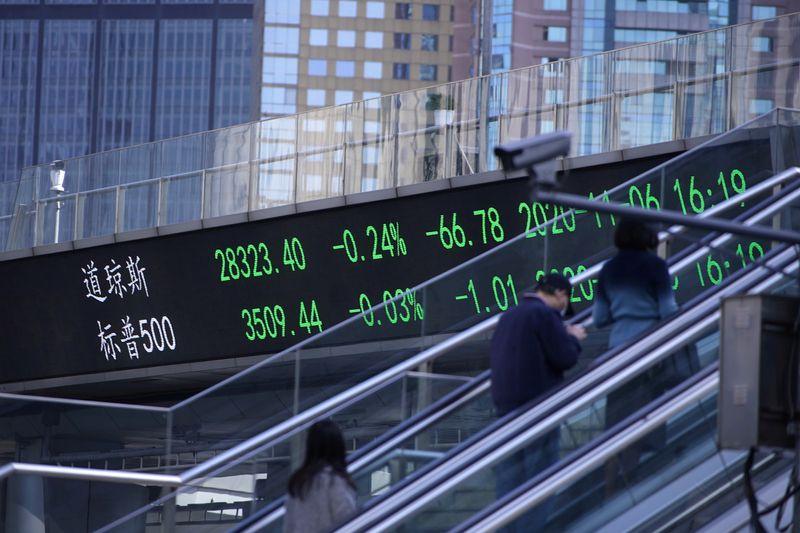 Asian shares hit a six-and-a-half week top on Tuesday, shaking off an initial drag from tech-driven Wall Street losses, while the dollar stayed at multi-week lows against most other major currencies in a boost for commodities.

“It is a Goldilocks scenario for Asia in the sense that you’ve got expectations of double digit earnings growth, and valuations which look attractive relative to the U.S. equity market and even the MSCI world [index],” said Andrew Gillan head of Asia ex Japan equities at Janus Henderson Investors.

However, Asian valuations are fair rather than cheap relative to their historical levels, Gillan noted.

Japan bucked the trend in Asia as the Nikkei fell 2.13% on worries that the possible reintroduction of COVID-19 emergency measures in the country’s biggest cities would slow the economic recovery.

In currency markets, the dollar continued its recent weakness, falling further from six-week lows it hit on Monday.

The risk friendly Aussie rose as much as 0.6% against the greenback to reach a one-month high, partly due to upbeat remarks from Australian central bank.

“In our view, USD can remain heavy this week as focus shifts from U.S. economic outperformance to the improving global economic outlook more broadly,” analysts at CBA wrote in a research note.

U.S. crude and Brent both gained about 1%, while three-month London copper traded just shy of its highest level since August 2011.

The electric-car maker slid 3.4% after a vehicle believed to be operating without anyone in the driver’s seat crashed into a tree on Saturday north of Houston, killing two occupants.