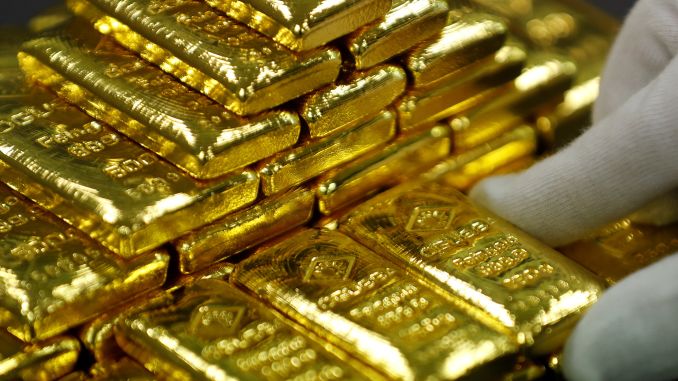 After two days of decent gains, gold prices struggle for direction on Friday, with the bullion is hovering above the $1,510 handle. The precious metal looks set for another weekly gain due to the remaining uncertainty over US-China trade spat and gloomy outlook for global growth.
Concerns about the economic slowdown intensified after the data this week showed that factory activity in China shrank for the sixth straight month in October, with the PMI for manufacturing coming in at 49.3 in October versus 49.8 in the previous month. As such, the index confirmed the domestic economic slowdown amid the ongoing US-China trade conflict.

In the US, another world’s largest economy, the GDP growth slowed to 1.9% in the third quarter from 2% previously. Despite the economy was expected to show a steeper slowdown, to 1.6%, the fact that the economy continues to show signs of waning momentum only reinforces worries about a possible recession in 2020.

Against this backdrop, demand for safe-haven assets including gold stays elevated, with the Federal Reserve decision to cut rates for the third time in its easing cycle providing extra support for the gold bulls. However, the market reaction to the FOMC’s statement was fairly constrained in general, as the latest policy decision was widely expected. Besides, the central bank signaled a pause in its easing measures.

Recently, the yellow metal got an impressive boost from a widespread risk aversion triggered by reports that China doubts that a long-term and comprehensive deal is possible with Trump. Coupled with cancellation of the summit that was to take place Chile, the statement added to trade uncertainty. Should the upcoming news headlines from Beijing or Washington fail to bring back hopes for resolution to the trade dispute any time soon, gold bulls will remain in control above the $1,500 key local support area.