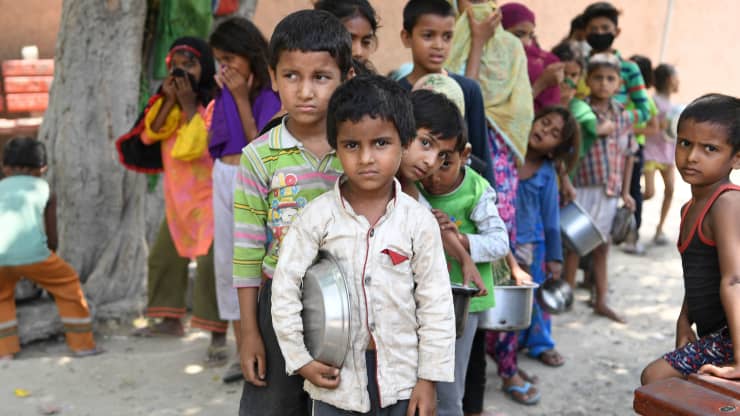 Around 75 million more people in India fell into poverty last year because of the pandemic-induced economic recession, compared with what it would have been without the outbreak, an analysis by Pew Research Center showed on Thursday.

That number for India accounts for nearly 60% of the global increase in poverty in 2020, the analysis showed. It defined the poor as people who live on $2 or less daily.

India has experienced one of the largest Covid-19 outbreaks globally. As of Friday, the country has reported a total of 11.51 million infections — trailing only the U.S. and Brazil — and over 159,300 deaths, according to data compiled by Johns Hopkins University.

The International Monetary Fund forecast the Indian economy to shrink by 8% in the fiscal year ending this month, before growing by 11.5% in the next fiscal year starting April.

The increase in poverty in India “claws back several years of progress on this front,” Rakesh Kochhar, senior researcher at Pew Research Center, wrote in a report.

From 2011 to 2019, the number of poor people in India was estimated to have dropped from 340 million to 78 million, he said in the report. That number would have fallen further to 59 million last year without the pandemic, but it is instead projected to rise to 134 million, the analysis showed.

Like India, China has a large population of around 1.4 billion people. But the pandemic’s effect on poverty was much smaller in China, according to Pew Research Center.

China’s economy expanded by 2.3% last year and is expected to grow by 8.1% this year, according to the latest IMF forecast. It was the only major economy to grow in 2020 — and that has helped poverty levels to remain “virtually unchanged,” said Kochhar.

The analysis on India and China accompanied Pew Research Center’s report on the how the Covid-19 outbreak affected income levels around the world.

Globally, an additional 131 million people became poor because of the global recession last year, compared with what it would have been if the pandemic didn’t happen, the research firm said.

“Given that India and China also account for more than a third of the global population, with about 1.4 billion people each, the course of the pandemic in these two countries — and how each recovers — will have a substantial effect on changes in the distribution of income at the global level,” it said.