Home Economy Pressured European officials are trying to drum up support for the AstraZeneca... 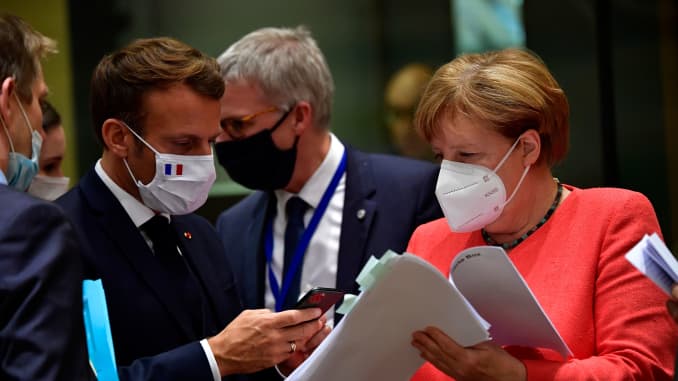 European officials are coming under increasing pressure to reverse restrictions on who can receive the AstraZeneca-Oxford coronavirus vaccine, and to drum up support for the shot.

On Monday, France performed a U-turn on previous guidance over who can receive the vaccine, now recommending the AstraZeneca shot to anyone under 75 (up from a previous age limit of 65), including those with pre-existing health problems.

Italy, Sweden and Poland have implemented similarly age-restrictive guidelines on who can receive the AstraZeneca shot, but France’s move has increased expectations that they too could follow suit and offer the jab to older age groups.

A renowned immunologist in Germany earlier this week called on his country to change its stance, echoing comments from other health experts in the country. Speaking to the BBC, Carsten Watzl, head of the German Society for Immunology, urged Chancellor Angela Merkel to take the vaccine live on TV to show it’s safe.

Watzl’s comments come amid tensions over the EU’s slow vaccine rollout and increasing hesitancy over the AstraZeneca shot. In addition, parts of Europe are battling to stave off a third wave of infections, largely caused by the spread of more infectious variants, lending more urgency to the take up of vaccines.

Germany’s vaccination committee has indicated that it is reviewing its earlier guidance and could issue an update shortly. The head of the committee, Thomas Mertens, told broadcaster ZDF on Friday that it was “possible” the vaccine could also be cleared for the over-65s.

He also defended the committee from criticism that it had been too critical toward the AstraZeneca vaccine amid reports that thousands of doses were going unused in Germany, and beyond in Europe, due to public apprehension (and misapprehension) over it.

Prominent health experts in France have also denounced what one described as “AstraZeneca bashing” and French Health Minister Olivier Veran went as far as to have the shot live on TV.

Europe’s drug regulator, the European Medicines Agency, approved the vaccine developed by the British-Swedish pharmaceutical giant and the University of Oxford in January, but France and Germany’s health regulators, among others in Europe, only approved the vaccine for the under-65s, saying there was not enough evidence to prove the vaccine’s effectiveness in the higher age group.

That hesitancy has fed through into lackluster take up of the shot by the public. The AFP news agency reported Monday that only 273,000 AstraZeneca doses had been administered in France out of 1.7 million received as of end-February, citing health ministry figures. Last week, Germany’s health ministry said it had administered only 15% of the Oxford shots it had available, Reuters reported.

Public sentiment has not been helped by somewhat ambivalent comments from some senior European officials.

French President Emmanuel Macron, for example, was quoted in January as telling journalists the AstraZeneca vaccine was “quasi-effective” for over-65s and Merkel, who’s 66, has insinuated she is too old to have the shot, going against data and experts that show the vaccine is safe and effective for the over-65s.

France and Germany’s stance appeared to ignore guidance from the EMA that stated that data showed the vaccine to be effective for anyone aged over 65, the main target group for vaccines given higher risk factors from Covid-19 that are associated with older age.

Since the EMA’s authorization, a growing body of both clinical trial and real-world data involving older age groups has shown that the AstraZeneca-Oxford University vaccine is strongly effective at preventing Covid-19 infection, hospitalizations and deaths.

It has also been shown to reduce transmission of the virus and the U.K.’s decision to delay the second dose of the vaccine, in a bid to offer more people initial protection, has been proved effective too. The U.K. has now vaccinated more than 20 million people with a first dose of a coronavirus vaccine. Germany has so far inoculated just over 6.3 million people (with 4.2 million of those having received a first dose), according to official data. France has given at least one dose of the vaccine to almost 3 million people, according to the latest data from Sunday.

The Oxford Vaccine Group’s Director Andrew Pollard said Tuesday that real-world data from Britain should be used to inform decision making in other countries in Europe.

Asked if other countries should look at real world data from Public Health England, Pollard said: “I think that the scientific committees in each of these countries will be doing exactly that over the days ahead,” he told BBC Radio 4′s “Today” program.

“The strength of evidence that we’re now seeing … all of that is being accessed by scientific committees in different countries, and I’m sure will help support their decision making,” he added.