Home Economy A tale of two Europes? Covid infections fall for some but others... 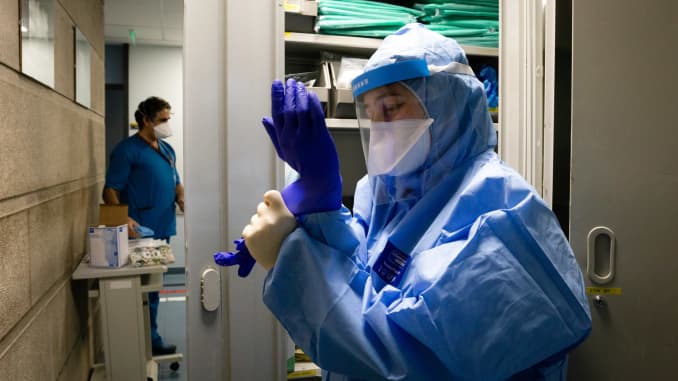 Some parts of Europe are seeing a worrying rises in new coronavirus infections as authorities grapple with outbreaks and the spread of more infectious variants of the virus.

It has prompted fears of a “third wave” of Covid cases, despite the number of new coronavirus infections falling dramatically in some parts of the region.

Portugal, Spain and the U.K. and have seen infections decline in recent weeks, but this contrasts sharply with countries including France, Germany and Greece which are all seeing rises in weekly cases compared to the previous week.

Coming down, for some

The U.K., where a more infectious variant emerged late last year and has since spread to Europe, is seeing infections falling, a decline that is likely tied to both the ongoing lockdown restrictions (set to be lifted in coming months) and a rapid rollout of coronavirus vaccines.

Since starting its vaccine rollout in early December, the U.K. has immunized over 18.2 million people with at least their first vaccine dose, the latest data shows. It made a decision early on to delay a second dose of the vaccine, to a maximum of 12 weeks after the first dose, in a bid to offer at least partial protection to more people.

With evidence showing that vaccines can help prevent transmission of the virus, as well as preventing severe Covid-19 infection, hospitalizations and deaths, the U.K. has seen its weekly coronavirus case rate fall. In the last seven days, 73,392 people have tested positive for Covid-19, down 14.7% from the previous seven days. On Wednesday, 9,938 new cases were recorded from the previous day, a steep drop from the 31,839 cases reported at the start of 2021, on January 1.

Nonetheless, the U.K. still has the fifth highest number of cases in the world, with over 4.1 million cases recorded, and almost 122,000 deaths, according to John Hopkins University.

Other countries in Europe seeing a decline in cases include Portugal, whose overwhelmed hospitals were at crisis point in mid-January, and where cases peaked at the end of the month. Earlier this week, the country’s Minister of Health Marta Temido said the trend in declining cases was solid.

“Right now, we are below 300 cases per 100,000 inhabitants. It is a trend that has become more pronounced,” she observed.

Meanwhile, neighboring Spain’s health ministry said on Tuesday that it had finally gotten past a situation of “extreme risk” due to the virus.

The country’s 14-day cumulative number of coronavirus cases per 100,000 inhabitants is now 235, below the number of 250 that the ministry said indicated that the pandemic was not under control, El Pais newspaper reported.

As the U.K. detailed its plan to lift lockdown measures earlier this week, other leaders on the continent worried about another possible wave of infections, particularly as the rollout of vaccines remains sluggish in the European Union, compared to its neighbor, the U.K.

On Wednesday, German Chancellor Angela Merkel warned that new variants of the virus risked a “third wave” of infections in the country, and said care was required to avoid the need for another national lockdown. Current restrictions are in place until March 7.

“Because of (variants), we are entering a new phase of the pandemic, from which a third wave may emerge,” Merkel told Frankfurter Allgemeine Zeitung according to comments translated by Reuters. “So we must proceed wisely and carefully so that a third wave does not necessitate a new complete shutdown throughout Germany.”

Meanwhile German health expert Karl Lauterbach, who is also a politician with the Social Democratic Party, said another surge could be difficult to prevent.

“We are not yet in the middle of the third wave of infections, but it has begun and cannot be stopped,” Lauterbach told the Passauer Neue Presse newspaper.

Earlier this week, Germany and France sought to avoid closing their common border amid the rise in cases and spread of variants. But on Thursday, France said it would strengthen restrictions around the border amid a surge in cases in the northeastern region of Moselle that’s been attributed to the spread of the variants of the virus first discovered in South Africa and Brazil.

On Wednesday, the French government ordered that the Dunkirk area must go into a weekend lockdown to stop what Health Minister Olivier Véran described as an “alarming” situation given the sharp rise in cases there too.

Other parts of the country have also seen concerning rises in infections, government spokesman Gabriel Attal told reporters Wednesday, according to France 24, with 10 of France’s 102 territorial areas (known as departments) now in a “very worrying situation” with more restrictions being considered.

Greece announced Wednesday that it would not be able to lift lockdown restrictions in the wider Athens area next Monday, as had been planned, following a sharp increase in cases, particularly in the Attica region where the capital is located.

The Netherlands has also seen a rise in cases, albeit to a lesser extent. Its public health institute released data on Tuesday showing that 29,977 new infections were recorded in the week to Feb 23., an increase of nearly 19% compared to the week before (when 25,229 cases were recorded).

Italy, where Europe’s pandemic first took hold in February 2020, has also seen cases tick higher, prompting a number of regions and municipalities to be reclassified from the moderate risk “yellow” level to the higher risk “orange” status.

One of the country’s top virologists, Massimo Galli, told the Il Messaggero newspaper last weekend that he was worried about a rise in cases: “The resurgence in infections is due in large part to the English variant. To be honest, all the data is going in the direction of a rise in new cases.”

Meanwhile in eastern Europe, Hungary and the Czech Republic have also seen a steep rise in cases, while neighboring Poland has seen a more gradual increase.

Access to vaccines remains an issue, with manufacturing issues at Pfizer/BioNTech’s facility in Belgium, and at AstraZeneca’s facilities in the Netherlands and Belgium.

Reuters reported Tuesday that AstraZeneca had told the EU it expects to deliver less than half the Covid vaccines it was contracted to supply in the second quarter, citing an anonymous EU source.

The drugmaker did not comment directly on the report but said it was “working to increase productivity in its EU supply chain and to continue to make use of its global capability in order to achieve delivery of 180 million doses to the EU in the second quarter.” The EU reiterated this position in comments to CNBC.

Slower vaccine rollouts have economic consequences by prolonging the negative impact of the pandemic to businesses. Florian Hense, senior economist at Berenberg, commented in a note Thursday, that “due to the spread of virus mutations, the risks are tilted to the downside near-term on the European continent.”

“The rebound in economic activity could be further delayed if restrictions remain in place for even longer. The economic outlook could sour more fundamentally later this year if countries fail to get close to herd immunity by autumn,” he said.

“In that case, countries would have to tighten restrictions significantly again in the next seasonal wave of virus infections next autumn. We see this as a highly unlikely tail risk, not as a likely scenario.”

The Federal Reserve will stay on hold until 2023, according to...