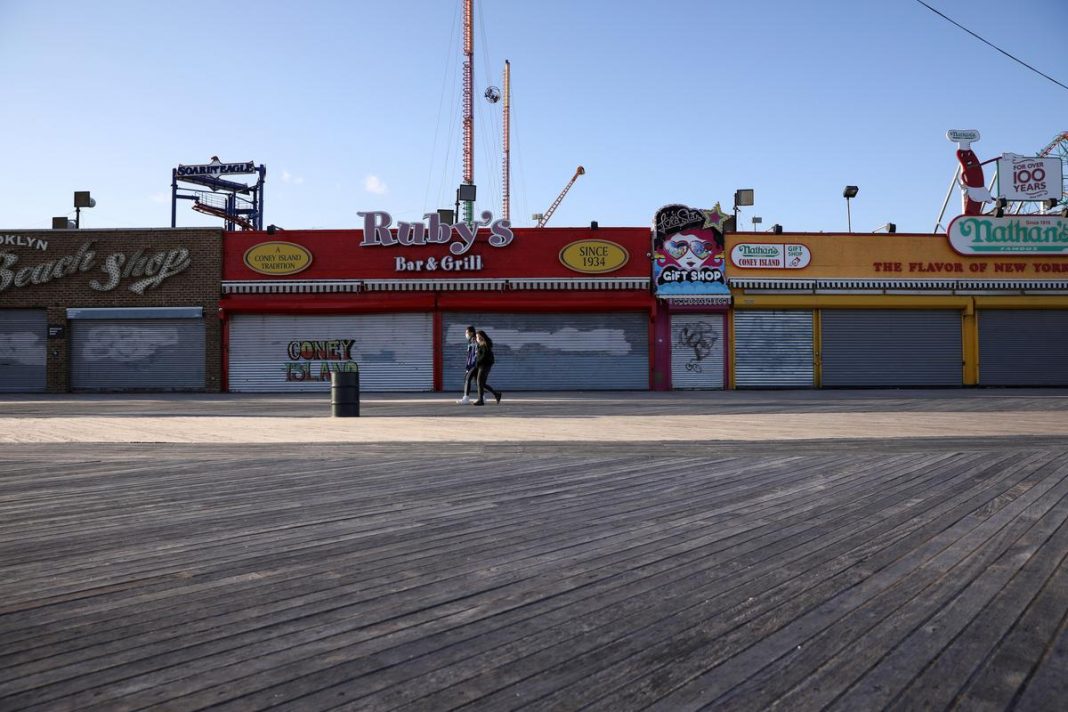 The anticipated decline in gross domestic product (GDP) will reflect a plunge in economic activity in the last two weeks of March, which saw millions of Americans seeking unemployment benefits. The Commerce Department’s snapshot of first-quarter GDP on Wednesday will reinforce analysts’ predictions that the economy was already in a deep recession.

“The economy is in free fall, we could be approaching something much worse than a deep recession,” said Sung Won Sohn, a business economics professor at Loyola Marymount University in Los Angeles. “It’s premature to talk about a recovery at this moment, we are going to be seeing a lot of bankruptcies for small and medium sized businesses.”

Gross domestic product probably decreased at a 4.0% annualized rate last quarter, weighed down by sharp declines in consumer spending and a drawdown of inventory at businesses, according to a Reuters survey of economists.

That would the steepest pace of contraction in GDP since the first quarter of 2009. A deepening downturn in investment by businesses was likely another major factor in the slump last quarter. Those drags probably overshadowed positive news from a shrinking import bill, the housing market and more spending by the government.

Estimates in the survey were as low as a 15% drop in GDP, which would be the steepest decline on record.

According to Kwok Ping Tsang, an associate professor of economics in the Virginia Tech College of Science, GDP was slashed by nearly $1.2 trillion from March 19 — around the time parts of the United States began lockdowns — to April 15, a 26% drop in output compared to the same period last year.

Many factories and nonessential businesses like restaurants and other social venues were shuttered or operated below capacity amid nationwide lockdowns to control the spread of COVID-19, the potentially lethal respiratory illness caused by the virus.

“For employees who have moved to work-from-home status, it is highly unlikely that labor input remains at 100 percent,” said Tsang. “Employees also must juggle child care, home schooling, and more stressors. Both limitations suggest that our estimates are likely to be biased downward.”

The anticipated contraction in GDP, together with record unemployment, could pile pressure on states and local governments to reopen their economies.

It could also spell more trouble for President Donald Trump following criticism of the White House’s initial slow response to the pandemic, as he seeks re-election in November. Confirmed U.S. COVID-19 infections have topped one million, according to a Johns Hopkins University tally.

“We’ve got the biggest shock since the Great Depression,” Trump’s economic adviser Kevin Hassett said on Tuesday. “It’s a very grave shock and it’s something we need to take seriously.”

The U.S. Congress has approved a fiscal package of around $3 trillion and the Federal Reserve has cut interest rates to near zero and greatly expanded its role as banker of last resort, but economists say these measures are inadequate.

They also did not believe that reopening regional economies, as some states are now doing, would not return the broader economy to pre-pandemic levels, which they said would take years. They expect an even sharper contraction in GDP in the second quarter.

“You are going to get close to 40% contraction in the second quarter,” said Joe Brusuelas, chief economist at RSM in New York. “It’s important that when we talk of reopening, we are not talking about it in a binary fashion. It’s not going from zero to one or flipping the switch. Firms are opening, but still heavily constrained by public health policy.”

Reopening the economy also comes with the risk of unleashing a second wave of new infections and a return to lockdowns.

Economists believe the economy entered recession in the second half of March when the social distancing measures took effect.

The National Bureau of Economic Research, the private research institute regarded as the arbiter of U.S. recessions, does not define a recession as two consecutive quarters of decline in real GDP, as is the rule of thumb in many countries. Instead, it looks for a drop in activity, spread across the economy and lasting more than a few months.

“The NBER will probably not tell us that for a while, but certainly all the characteristics of a very deep recession are fully underway,” said Michelle Girard, chief U.S. economist at NatWest Markets in Stamford, Connecticut.

Consumer spending, which accounts for more than two-thirds of U.S. economic activity, is expected to have dropped at as much as a 17% rate in the first quarter. Spending grew at a 1.8% pace in the October-December period.

The other components of GDP were probably equally weak last quarter.

While declining imports helped narrow the trade deficit and contributed at least two percentage points to GDP last quarter, that probably meant no inventory was accumulated. According to JPMorgan business inventories probably decreased at a $30 billion rate in the first quarter after increasing at a $13.1 billion pace in the fourth quarter.

Business investment likely contracted for a fourth straight quarter, pulled down by declines in spending on equipment and nonresidential structures such as mining exploration, shafts and wells. Business investment was already pressured by the Trump administration’s trade war with China, cheaper oil and problems at Boeing.

While the housing market likely accelerated last quarter, momentum appears to have fizzled in March. Moderate growth is expected in government spending.

Most economists have dismissed the idea of a quick and sharp rebound, or V-shaped recovery, arguing that many small businesses will disappear. They also predicted some of the about 26.5 million people who have filed for unemployment benefits since mid-March are unlikely to find jobs.

“I don’t see a V-shaped recovery, but a side-ways J-recovery,” said RSM’s Brusuelas.