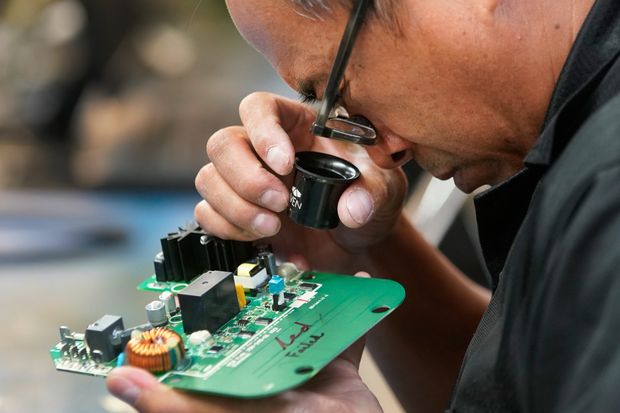 U.S. economic growth settled in at a lower gear in the third quarter, with consumer spending and housing investment increases offsetting a business investment drop.

Gross domestic product—the value of all goods and services produced in the U.S.—rose at an annual rate of 1.9% from July through September—adjusted for inflation and seasonality, the Commerce Department said Wednesday, compared with 2.0% in the second quarter.

“I think it’s consistent with an economy that’s just moving back towards trend,” Michael Feroli, an economist at JPMorgan Chase & Co., said of the growth reading.

The stronger-than-expected growth rate was boosted by government and consumer spending, residential investment and exports. Still, business spending declined for the second quarter in a row. Investment in structures dropped sharply, particularly those related to the petroleum and natural gas industries.

The Commerce Department report showed the divergence between relatively solid consumer spending and falling business investment continued from the second quarter into the third, as the long-simmering trade war with China escalated. The report came hours ahead of a scheduled rate announcement from policy makers at the Federal Reserve, who conclude a two-day policy meeting later Wednesday.

How have changes in the economy affected your finances or your business? Join the conversation below.

The central bank cut interest rates twice in the third quarter. Officials are expected to again cut the benchmark federal-funds rate by a quarter percentage point, to a range between 1.50% and 1.75%, aiming to shield the economy against growing risks of a sharper economic slowdown.

Compared with the third quarter a year ago, output grew 2.0%—the weakest quarterly year-over-year rate since the final quarter of 2016.

Consumers are the lifeblood of the U.S. economy, as their spending accounts for nearly 70% of output. The report showed their spending on big-ticket items such as cars and appliances slowed but remained strong, while spending on services slowed.

The slower pace of consumer spending in the third quarter came despite a solid financial foundation for many U.S. households. The unemployment rate was at half-century lows from July to September, and wages and incomes rose. Consumer sentiment has remained strong in recent months and rose slightly in October, according to the University of Michigan’s Surveys of Consumers.

The housing sector was a tailwind for growth as residential investment rose at a 5.1% annual pace. The boost, which followed six straight quarters of declines, likely reflected lower short-term interest rates propelling construction and improvements.

3 charts show China is far from meeting its ‘phase one’...