Home Economy ASIA ECONOMY Singapore sets aside over $8 billion in 2021 budget for... 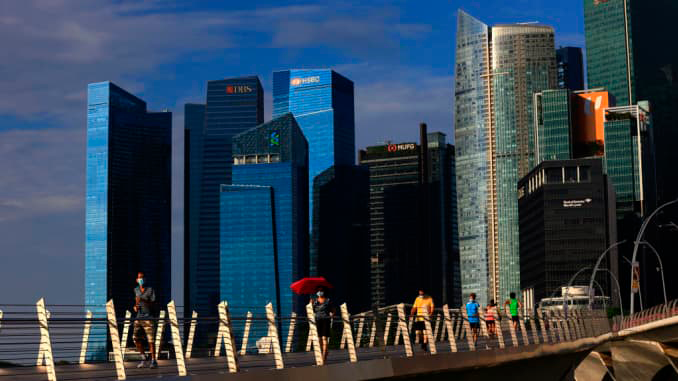 Finance Minister Heng Swee Keat, in his annual budget speech, outlined how the funds will be used:

He added that if not for the measures, the Southeast Asian economy would have shrunk by at least 12.4% last year. That’s more than double the 5.4% contraction — still the worst-ever economic recession — that the country recorded in 2020.

Singapore’s economy is expected to grow 4% to 6% this year, according to the government’s forecast.

The city-state was one of the first countries outside China to report cases of Covid-19 in early 2020. The country went into a partial lockdown — locally referred to as a “circuit breaker” — in April last year to stem the virus spread.

The economy has gradually reopened since June and the number of newly confirmed infections has slowed down in recent months. As of Monday, Singapore has reported more than 59,800 cumulative cases of Covid-19 and 29 deaths, data by the health ministry showed.

Overall, the city-state’s government is expected to record a deficit of 11 billion Singapore dollars ($8.3 billion) or 2.2% of GDP — an unusual occurrence for the first budget of a new term of government.

Singapore’s constitution requires the government’s revenue and expenditure to be balanced over a typical five-year term. In the last few electoral cycles, the government accumulated surpluses early in its term — which allowed it to fund bigger budgets later.

The country held general election last July in the middle of the Covid-19 pandemic. So this coming year’s budget is the first for the current term of government.

Finance Minister Heng said the government is expected to draw 53.7 billion Singapore dollars ($40.6 billion) from its reserves to fund Covid support measures in 2020 and 2021.

The minister also said the government will issue up to 90 billion Singapore dollars ($68 billion) in new bonds to fund major long-term infrastructure projects.