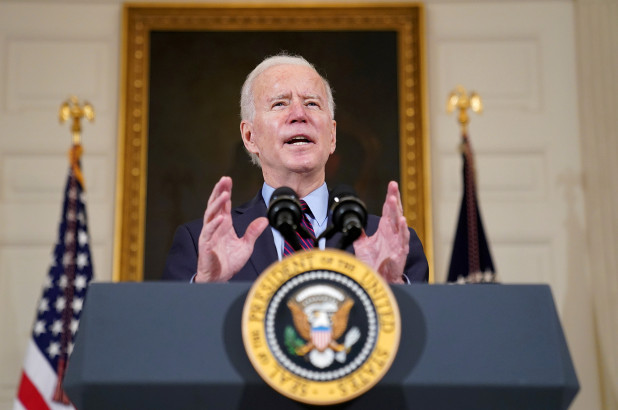 Everyone loves a tale of redemption, but Hunter Biden’s decade of shady influence-peddling off his family name can’t just be airbrushed away by the president choking up on national television on Super Bowl Sunday.

Joe Biden could barely contain his pride that his son, Hunter, 51, has written a book about his crack addiction.

“The honesty with which he stepped forward and talked about the problem. And the hope that, it gave me hope reading it,” Biden said in an interview with CBS News.

“My boy’s back,” he said, looking tearful. “I’m sorry to get so personal.”

This is a practiced move by Biden to use sympathy as a shield to protect his family’s corrupt business dealings in foreign countries.

He cunningly has framed the narrative so that anyone who dares poke into Hunter’s business is crucifying a heroic recovered addict who already has suffered enough.

Biden probably has suffered over the years watching his son descend into addiction, but his campaign knew Hunter was a liability, so they strategically prevented the dirty family business from becoming a campaign issue by turning scrutiny of Hunter into a no-go zone.

In the first presidential debate, Biden neutralized President Trump’s attacks by looking into the camera and saying: “My son . . . like a lot of people you know at home, had a drug problem. He’s fixed it, he’s worked on it. And I’m proud of him.”

Biden outright lied when he said repeatedly he knew nothing about Hunter’s business, a line which morphed into “my son did nothing wrong,” after the New York Post produced evidence in the form of e-mails from Hunter’s abandoned laptop showing “The Big Guy” was in it up to his neck.

He also bullied any reporter who dared raise the topic. “Another smear campaign. Right up your alley,” he snapped at one, and “God love you, man; you’re a one horse-pony,” he mocked another.

He disappeared into his basement for almost a week after The Post’s laptop revelations in October, while his allies in social media went to work disappearing the stories.

That Big Tech censorship, we now discover, thanks to an extraordinary exposé by Time, was part of the “conspiracy to save the 2020 election . . . a well-funded cabal of powerful people, ranging across industries and ideologies, working together behind the scenes to influence perceptions, change rules and laws, steer media coverage and control the flow of information. They were not rigging the election; they were fortifying it.”

The article goes on to explain that the year-long election “fortification” strategy, engineered by the AFL-CIO, involved Silicon Valley as a central player.

Progressive activists moved to “pressure platforms to enforce their rules, both by removing content or accounts that spread disinformation and by more aggressively policing it in the first place.”

Civil-rights attorney Vanita Gupta told Time, “It took pushing, urging, conversations, brainstorming, all of that to get to a place where we ended up with more rigorous rules and enforcement.”

To that end, she attended a dinner of civil-rights leaders where Facebook founder Mark Zuckerberg was pressured to ramp up censorship in the lead-up to the 2020 campaign, and met with Twitter CEO Jack Dorsey. Biden now has nominated her for associate attorney general. Job well done.

So now we can understand why Facebook and Twitter moved so rapidly and decisively to censor The Post’s Hunter Biden laptop stories. And we can see why they deplatformed the sitting president and were unfazed by criticism of that shockingly autocratic move from world leaders such as German Chancellor Angela Merkel and French President Emmanuel Macron. At a congressional hearing, they were impervious to the disapproval of Republican senators while testifying virtually about their censorship.

According to Time, Big Tech had bought protection from a powerful anti-Trump alliance of leftist and racial-justice activists.

The alliance also included big business and unions: witness the American Chamber of Commerce getting into bed with the AFL-CIO. The alliance also had the power to turn on and off Antifa riots like a tap.

So, when Big Tech exercised its immense power to run protection for the Democratic presidential candidate and censored one of America’s most read and its oldest continuously published newspaper, founded by Alexander Hamilton, it was just bowing to the new reality.

And then after the election, we were informed that the FBI is investigating Hunter over tax fraud, money-laundering and foreign ties to China.

Joe says Hunter’s book is about his triumph over addiction, but the fact that it’s been listed in Chinese biographies ought to tell you where the public interest lies. It will be nothing but a con job if Hunter doesn’t ’fess up about his $1.5 billion deal with a subsidiary of a Chinese bank, and all the other lucrative deals in parts of the world where his father had influence.

Dems’ lies on the riot are a Capitol offense

In their 80-page brief for this week’s impeachment trial of the man who no longer is president, Donald Trump, the Dems shamelessly lie, tell whoppers and gild the lily.

Take just one factoid: “The insurrectionists killed a Capitol Police officer by striking him in the head with a fire extinguisher.” The footnoted source is The New York Times.

There is no evidence Capital Officer Brian Sicknick was murdered by Trump supporters wielding a fire extinguisher. The viral video of a man tossing an extinguisher at cops was a red herring because Sicknick was not among them. His death the next day was attributed by his union to a stroke, and the cause still is shrouded in mystery. Capitol Police have not been forthcoming with facts, allowing Dem disinformation to flourish, such as Sen. Cory Booker’s declaration: “This great man was murdered.”

It also is inaccurate to assert, as the Dems and much of the media are doing, that “five people were killed” at the Capitol Hill riot. Only one person accurately can be described that way – the unarmed Air Force veteran Ashli Babbitt, shot by a Capitol officer who strangely has not been named and reportedly will not be charged. Three other Trump supporters died of natural causes.

But the “Big Lie” serves the nefarious purposes of Nancy Pelosi and pals so they can divert attention from Babbitt’s death and exaggerate the riot to 9/11 proportions in preparation for their second Trump show trial.

If you’d told the typical Biden voter before the election that, as president, Joe would open the borders to COVID-exposed migrantsillegal and then offer them a scarce vaccine, she would not have believed you. Joe’s responsible about COVID, she would cry, unlike that terrible Donald Trump! He even wears two masks!

But, actually, he doesn’t care. It makes zero sense in the middle of a pandemic, when jobs are scarce, to usher at least 1,000 illegal immigrants over the border into Texas in the last few days in what The New York Times describes as an alternative to the “health crisis” of keeping them in detention. So just send the crisis over the border. Makes sense.

Who knows how many more will follow? Biden is rewarding 11 million already here illegally with “a path to citizenship,” so, really, there’s no limit.

His solution to this superspreader catastrophe, according to the Department of Homeland Security, is not to enforce border protection but to give illegal immigrants the COVID vaccine whichthat is already rationed for Americans.

White House Press Secretary Jen Psaki declared last week that the vaccine plan is “morally right [and] ensures that people in the country are also safe.”

Why would a president who claims to be a patriot do such harm to the citizens who elected him? Is it just a ploy to turn Texas blue? It sure as hell is not compassion, because too many Americans are suffering right now.

U.S. and EU should put aside their Boeing-Airbus feud and join...