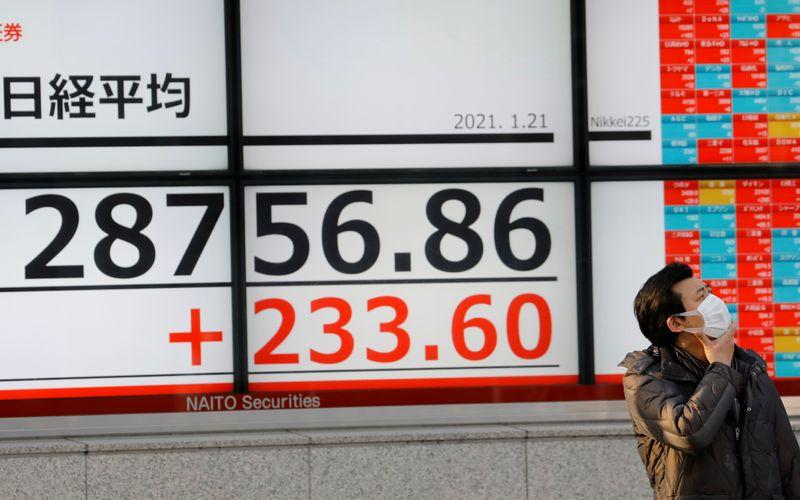 Asian stock markets gained for a second day on Tuesday on increased optimism about economic stimulus and global recovery, while retail investors retreated from GameStop and their new-found interest in silver.

The momentum looked set to carry through into European trade, with FTSE futures up 0.66% and E-mini futures for the S&P 500 index rising 0.52%.

Markets were buoyant ahead of negotiations Tuesday between U.S. President Joe Biden and Republican senators on a new COVID support bill. The GOP’s $618bn stimulus plan released early Monday was about a third the size of the President’s proposal. Top Democrats later on Monday filed a joint $1.9 trillion budget measure in a step toward bypassing Republicans.

“The U.S. stimulus story continues to be the half glass, which markets are happy to interpret as half full,” said Vishnu Varathan, head of economics in Asia at Mizhuo Bank in Singapore.

“The improved sentiment also derived from the fact that vaccinations hit the milestone within the U.S. of more vaccinations than infections and I think there’s a sense that the rollout program remains quite optimistic and encouraging,” he said.

The dollar hovered near a seven-week high, benefiting from a euro selloff overnight after coronavirus lockdowns choked consumer spending in Germany, and on short-covering in over-crowded dollar-selling positions.

Australia’s S&P/ASX 200 benchmark extended gains, up 1.49% after its central bank held rates at near-zero in a widely expected decision on Tuesday.

The Reserve Bank of Australia’s pledge to buy more bonds saw yields on 10-year paper drop back to 1.08%, after touching a 10-month top of 1.19% early in the session.

South Korea’s KOSPI jumped as much as 2.7% to a one-week high, lifted by chipmakers and foreign buying, as the country’s ruling party readies another round of COVID-19 cash handouts and an extra budget.

Institutional investors are still digesting the retail trading frenzy that boosted GameStop Corp and other so-called meme stocks in recent sessions against their financial fundamentals but have made cautious moves to protect their positions.

Spot silver prices fell nearly 2% on Tuesday, as investors locked in profits after the precious metal touched a near eight-year peak in the previous session driven by retail investors.