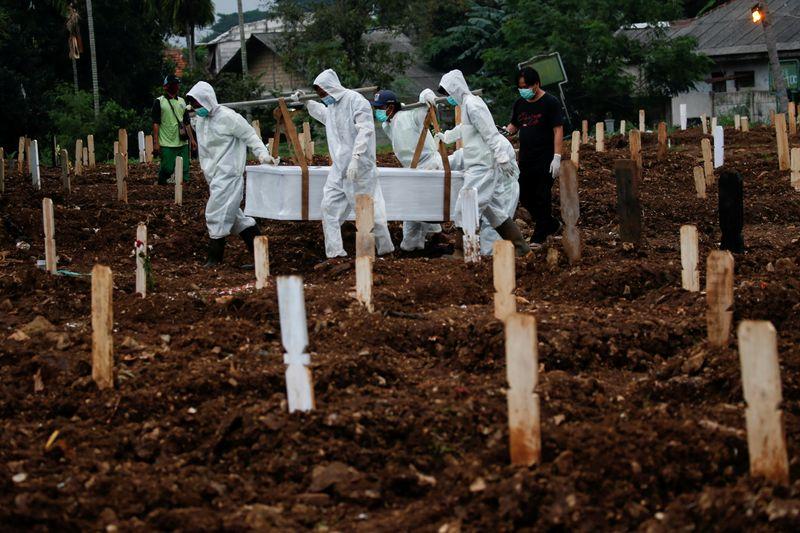 Indonesia is set to officially surpass one million coronavirus cases on Tuesday, a grim milestone for the Southeast Asian nation that has struggled to get the COVID-19 pandemic under control.

The world’s fourth-most-populous country had recorded 999,256 coronavirus infections as of Monday, with the average daily increase running above 11,000 for more than a week, according to official data. Deaths from the respiratory disease have totalled 28,132. Those numbers are some of the highest in Asia but health experts believe the true spread is likely to be far worse.

Indonesia has been criticised for having among the lowest testing and contact-tracing rates globally, and for focusing on securing vaccines at the expense of trying to enforce health protocols.

The vaccine made by Pfizer and its German partner BioNTech, one of two authorized for U.S. emergency use, is shipped in vials initially indicated to hold five doses. Six doses can be drawn with low dead space syringes, which minimize the amount of vaccine left in the syringe after use. If healthcare providers can reliably extract the sixth dose it would allow supplies to be stretched 20% further and could be a financial boost for Pfizer, which is paid per dose.

Becton Dickinson’s government contract includes only limited supply of the niche product, and a new factory that it is developing is focused on other types of syringes, said Troy Kirkpatrick, the company’s senior director of public relations.

Tokyo has revised its contact-tracing strategy to prioritise outreach to higher-risk individuals affected by the coronavirus, according to a letter sent by the metropolitan government to public health authorities last week.

Despite its early success, experts have warned that the country’s strategy to trace clusters of cases rather than conduct mass tests could face limits. Public health officials and doctors have lobbied for months for authorities to increase testing to ensure early detection and contain the spread of the virus.

Separately, vaccine programme chief Taro Kono said on Tuesday that the central government will shoulder all costs associated with coronavirus vaccinations, as Japan prepares to begin vaccinations in late February.

One in three with COVID-19 may not know it

At least one-third of people infected with the highly contagious coronavirus may not realise it, a new report warns. Some of them are “presymptomatic,” meaning they have no symptoms but will eventually develop them. Others will remain asymptomatic for the duration of their infection.

“Infection without symptoms … is important because infected persons can transmit the virus to others even if they have no symptoms,” the researchers said on Friday in Annals of Internal Medicine, having analysed data from 43 studies that used gold-standard PCR testing to diagnose COVID-19 and 18 that used antibody testing to look for evidence of previous infection.

The researchers called for new strategies to control the spread of the virus, such as “inexpensive, rapid home tests to identify and contain presymptomatic or asymptomatic cases, along with government programs that provide financial assistance and, if necessary, housing to enable infected persons to isolate themselves.” It will be important to know whether vaccines are preventing asymptomatic infections, they said.