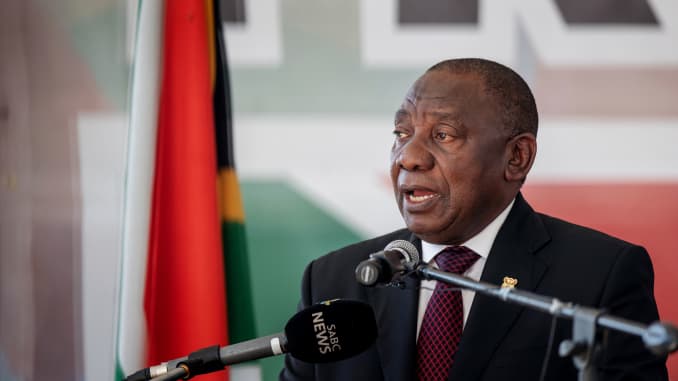 In remarks delivered at the World Economic Forum’s virtual Davos Agenda event, Ramaphosa cautioned that some countries had ordered more supplies of vaccines than they needed, and that this was counterproductive to the global recovery effort.

“Ending the pandemic worldwide will require greater collaboration on the rollout of vaccines, ensuring that no country is left behind in this effort,” he said.

“The rich countries of the world went out and acquired large doses of vaccines from the developers and manufacturers of these vaccines, and some countries have even gone beyond and acquired up to four times what their populations need,” he said.

“That was aimed at hoarding these vaccines and now this is being done to the exclusion of other countries in the world that most need this,” he added, urging major economies to release their excess stockpiles for distribution to developing nations.

South Africa is the country worst hit by Covid-19 on the continent, which has largely managed to stave off the kind of uncontrolled spread which brought the U.S. and much of Europe to a standstill. As of Tuesday morning, the country had recorded more than 1.4 million cases with 41,117 deaths.

In a panel discussion as part of the Davos Agenda event on Tuesday morning, Africa CDC Director John Nkengasong said the continent is facing a “very aggressive second wave” of the pandemic, with mortality increasing on average 18% across the 55 African member states last week.

“We as a continent must recognize that vaccines will not be here when we want them, but as such we need to really focus on the public health measures that we know work,” he added.

Ramaphosa, who is also chairman of the African Union, lauded the continent’s collaborations on Covid-19 responses, including the African Medical Supplies Platform, which has offered assistance to national health systems, established regional collaboration hubs and deployed community healthcare workers to support testing and treatment efforts.

He also praised the progress of the African Vaccine Acquisition Task Team, which he said was created when AU nations realized “how the world’s richest countries are behaving.”

The AVATT has secured a provisional 270 million doses for AU member states directly, in addition to the 600 million expected from the World Health Organization’s COVAX initiative.