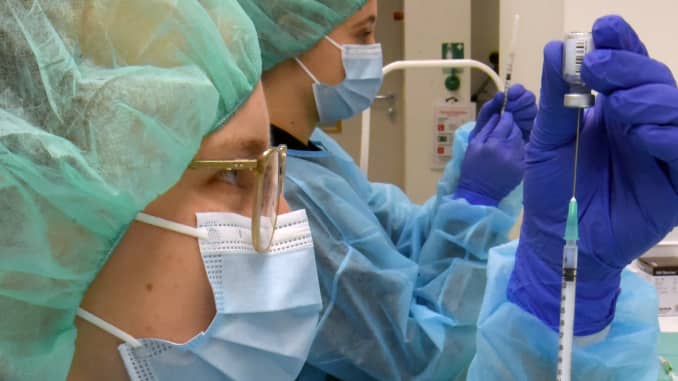 Since Germany kicked off its vaccination drive in late December, along with the rest of the EU, it’s come across a raft of logistical challenges.

Now, nearly a month into the program, its sluggish progress is causing frustration and concern among some German lawmakers and health professionals.

Health Minister Jens Spahn had targeted 300,000 inoculations a day, but so far the country has failed to hit that. Data from public health agency, the Robert Koch Institute, published Tuesday showed that in the previous 24 hours, just over 62,000 vaccinations (the majority of which were first doses) were carried out.

In total, since Germany began vaccinations in all its 16 states on Dec.27, almost 1.2 million people in Germany (the priority groups for now are healthcare workers, nursing home residents and staff and the elderly) have received a first dose of the coronavirus vaccine and almost 25,000 have received their second dose.

By contrast, the U.K., which was the first country in the world to approve and rollout the Pfizer-BioNTech vaccine (partly developed in Germany), and then the University of Oxford-AstraZeneca candidate, started its Covid vaccination program earlier in December, has vaccinated over 4 million people so far with their first vaccine dose (over 450,000 have had their second dose), and was exceeding 300,000 vaccinations per day toward the end of last week.

The EU followed a policy of purchasing coronavirus vaccines as a bloc, but some countries, including Germany, also made their own additional purchasing agreements.

Nonetheless, supply issues have been an issue even at the start of Germany’s vaccination drive, with a lack of available vaccines seen in certain hubs, as well as other difficult logistical issues around vaccinating its priority groups, such as the elderly. This has created patchy vaccine deployment performance from state to state in the country.

Dr. Stefan H.E. Kaufmann, a renowned immunologist and microbiologist in Germany, and founding director of the Max Planck Institute for Infection Biology in Berlin, told CNBC Tuesday that the vaccination process was beset with challenges from the start.

“Number one priority (in the vaccination drive) are currently the elderly and people with severe pre-disposing diseases, notably in nursery homes. This process is ethically fine, but it is very time consuming. It also includes health care workers and medical staff at nursing homes and hospitals. Apparently some of the nursing home staff is hesitant with respect to vaccination,” he noted.

So far, only the vaccines created by Pfizer and BioNTech, and Moderna have been approved by the European Medicines Agency for use in the bloc. The easier to store and transfer (and cheaper) candidate from AstraZeneca and the University of Oxford has not yet been approved.

Time is of the essence when it comes to vaccine rollouts, particularly amid a surge in cases due to the more transmissible mutations that have taken hold. Still, Germany has recorded fewer cases than many of its neighbors, recording just over 2 million infections to date. The death toll stands at 47,958.

For both the U.K. and EU, a key issue is that supply cannot meet current demand for vaccines, and Germany has been no exception, with early reports of people struggling to get vaccination appointments amid a shortage of doses. But vaccine makers have promised to scale-up production and deliver millions more doses to be delivered in the next few weeks and months.

In the meantime, however, the “doses secured for immediate use are insufficient,” Kaufmann noted.

“Whilst so-called vaccination centers have been established all over Germany, there is currently a lack of vaccines for rapid maximum vaccination coverage in these centers. (The) hope is that the process will be accelerated once the difficult and time consuming vaccination (at nursing homes) has been accomplished,” he said, noting that the speed of Germany’s vaccination drive “would have been faster if more doses from BioNTech and Moderna would have been secured.”

“In my opinion, everything needs to be done to secure more doses for immediate or short-term use. This is even more important because of the rising incidences of mutant strains which could evade vaccine-induced immune responses,” he warned.

Germany is not alone in seeing a sluggish start to its vaccination drive. There has been EU-wide criticism of the European Commission for not procuring enough vaccines for the bloc to begin with.

Florian Hense, European economist at Berenberg, told CNBC that the approval and procurement process meant that the EU had been at the back of the line, or at least behind other countries including the U.K. and U.S., when it came to receiving vaccine supplies.

“Inasmuch the EU negotiated with pharma companies and approved vaccinations on the behalf of its member states, Germany’s vaccination drive was always going to be ‘un-German’, regardless of what you associate with that term,” he told CNBC Monday.

“I suspect that the EU’s later approval delayed the start of vaccinations and ever since has limited the pace of vaccinations per day as the vaccinations have been arriving in the EU at a slower pace than they have (per capita) in the U.K., the U.S.”

Needless to say, there has been criticism from other parliamentarians of the government’s overall strategy.  Dr. Janosch Dahmen, a doctor and German parliamentarian with the Green party, told CNBC that he was “very concerned because Germany is already behind.”

“The progress of the vaccination campaign is far too slow and one of the reasons is the supply shortage, but the more urgent problem is that the vaccination infrastructure reveals multiple problems, most of all staff shortages, distribution problems in the federal states and a far too-much centralized approach,” he said.

“As a doctor and a politician, I’m very concerned about the situation over here and aside from all the effort we need to put into a more effective, nationwide vaccination campaign, we need to build bridges due to testing, self-testing and we need to put up more effort in the sector of contact tracing, which is another important part to fighting this pandemic,” Dahmen said.