Home Economy As Washington delays stimulus, the Fed is running out of ways to... 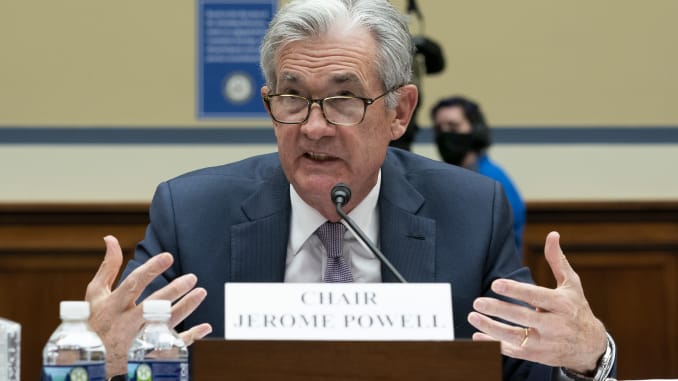 Federal Reserve officials have been pressing Congress to provide more fiscal help to the U.S. economy, and with good reason: The central bank is running out of ways it can help.

Since the expiration of key provisions of the $2.2 trillion CARES Act lifeline that Congress extended in March, the Fed again has been relied on as the economy’s key support system. The central bank has kept policy extraordinarily loose, continuing to offer its lending and market-boosting programs, and now resolving that it likely won’t raise short-term interest rates for years.

While no Fed official ever would acknowledge that monetary policy ammunition is running low, and in fact would insist to the contrary, there appear to be few weapons left in the Fed arsenal.

“What they have left is really on the margin,” said Mark Zandi, chief economist at Moody’s Analytics. “They just don’t have much room to maneuver with regard to monetary policy. I don’t really see what more they can do. That’s why they’ve been so explicit in telling fiscal policymakers to do more, because they know they can’t help.”

Indeed, Chairman Jerome Powell and other officials rarely miss an opportunity to egg on Congress for more aid.

Earlier in October, Powell said in a speech to the National Association for Business Economists that delaying more rescue funds could “lead to a weak recovery, creating unnecessary hardship for households and businesses.” He stressed that the bigger risk would be low balling fiscal help, adding that “the risks of overdoing it seem, for now, to be smaller.”

Also this month, Fed Governor Lael Brainard, who is considered the likely next Treasury secretary should Joe Biden win the presidency, said the failure of Congress to come through represents “the most significant downside risk” to her economic forecast.

Fed officials occasionally will veer into voicing their views on fiscal policy, but it’s not common. Former Chairman Ben Bernanke warned lawmakers of a “fiscal cliff” in which key aid was expiring, and his successor, Janet Yellen, also occasionally would stress the need for muscular fiscal policy.

For his part, Powell prior to the pandemic more often warned about the unsustainable path of fiscal policy regarding debt and deficits. That is no longer the case as coronavirus infections continue to grow and the economy struggles to get back to its pre-Covid 19 footing.

The Fed still has some policy options to help the real economy to buttress the liquidity programs it has instituted that have helped markets run smoothly since March’s tumult.

Should spreads between bond yields start to widen – a classic sign of financial stress – the Fed can adopt “yield curve control” through bond purchases. It also can step up the pace of its bond-buying, and it can strengthen further the guidance it issues on what it would take to raise interest rates.

But those are all fairly dull instruments now.

Government bond yields already are at historic lows, and Fed officials themselves have expressed skepticism about the impact of yield curve control.

The earnestness of the Fed’s requests for more fiscal aid are a reflection, then, of just how limited the central bank’s options are.

“There’s no game-changer here,” Zandi said. “There’s nothing big they can do to help the economy in the near term.”

The Fed’s biggest current weapon is the marked change in the approach it has taken to inflation. The new regime involves average inflation targeting, with the practical impact being that the Fed will allow inflation to run above 2% for a period of time to account for the current period – the last eight years, in fact – where it has missed that target.

However, even the impact of that has limitations.

Since everyone already pretty much expects the Fed to stay put for years, reiterating that stance provides little balm for when investors get nervous and economy starts to wobble. In fact, the average inflation approach likely will have more impact when the economy strengthens rather than when it is weak, said Krishna Guha, head of global policy and central bank strategy for Evercore ISI.

“This guidance will exercise a much more powerful influence under positive shocks with the economy moving deeper into the expansion than it does under current conditions when the Fed would not be raising rates under any plausible reaction function,” Guha said in a note.

Importantly, Guha added that the impact of the inflation targeting itself “would be much lower without fiscal cooperation, in part because the central bank cannot target the worst hit sectors.”

The Fed also could tinker with its lending programs, but most of those have been lightly used, so easing the terms or expanding into more corporate bond buying probably would only help at the margins as well.

To be sure, there’s always the chance the Fed may not even be asked to do much.

The government on Thursday releases its first estimate for third-quarter GDP, and the growth level could be 36.2%, according to a tracking estimate update the Atlanta Fed released Tuesday. A surprise uptick in long-lasting capital goods orders Tuesday, a vital housing market and upbeat CEO sentiment all point to the possibility that the U.S. could have a lasting expansion.

However, many economists, including those at the Fed, don’t expect anything close to the Q3 pace to continue. The Federal Open Market Committee sees growth at 4% in 2021, which would be exceptional under normal circumstances but could leave the U.S. still short of pre-pandemic levels in this case.

The ultimate wildcard, of course, is the coronavirus progression. If cases continue to increase and activity is curtailed, that makes things even tougher for the Fed, particularly without more government spending.

“The need for stimulus has become even more important than when the Fed began its synchronized chant for a fiscal response,” said Quincy Krosby, chief market strategist at Prudential Financial. “What was interesting about it was it came from the hawks on the Fed and it came from the doves on the Fed. It was a thoroughly synchronized, consistent and almost incessant chant.”

Left on its own, the Fed’s next move might be to accelerate its asset purchases, which traditionally have been a boon to the stock market but have tailed off lately. In the four-month March-through-June period as the pandemic began, the Fed’s balance sheet grew 66% to $7.13 trillion.

In the four months since, the growth has been just 1.3%, even though Fed officials have emphasized that they will continue to buy Treasurys and mortgage-backed securities at least at the current pace.

“The Fed is really the only game in town,” said Nick Maroutsos, head of global bonds at Janus Henderson. “As far as them being out of ammunition, I think we are far from that happening. They have far more tools they can use.”

Maroutsos sees the likelihood of more stimulus combined with an accommodative Fed committed to keeping rates low as balms for a market that has become volatile lately over fears that the Q3 economic burst could be thwarted.

“The Fed’s on hold for at least four to five years, maybe more. That Fed put is in place between now and eternity,” he said. “It feels like they are incentivizing people to buy risk assets, and that will continue because it’s not in the Fed’s best interests to allow yields to rise.”