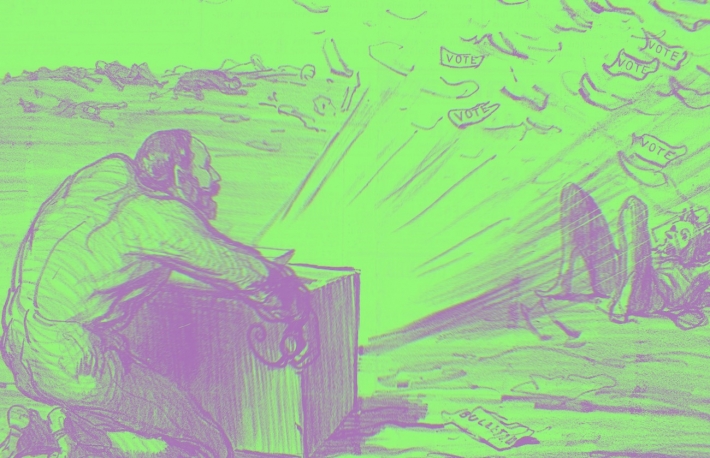 The outcome of next month’s U.S. presidential election may not matter much for bitcoin’s price: Economic stimulus in the trillions of dollars is likely no matter who wins, bolstering the largest cryptocurrency’s appeal as a hedge against inflation.

President Donald Trump over the past week has reversed his opposition to a new government-spending bill following April’s $2 trillion coronavirus-aid package. He signaled his eagerness to strike a deal with leaders of the opposition Democratic party, who have proposed a $2.2 trillion stimulus bill. According to Axios, he told senior lawmakers in his own Republican party that he wants “a big deal.”

If Trump wins in November, he’s likely to continue supporting stimulus spending or easy monetary policy from the Federal Reserve, given his four-year track record of jawboning the U.S. central bank to cut interest rates whenever signs of weakness appear, while boasting about U.S. jobs growth and stock market increases. He also could push for a new round of tax cuts.

Such expenses would come on top of what already seems like an unending sea of red ink: The U.S. government’s budget deficit for the 2020 fiscal year tripled to $3.1 trillion. And economists say the Federal Reserve is likely to keep printing money in coming years to help finance the budget gap.

“Because the economy’s hands are tied and policymakers’ hands are tied, the wiggle room that any party in power is going to have is limited,” said Chris Wallis, chief investment officer of Vaughan Nelson Investment Management, a division of the French financial firm Natixis, told First Mover in a Zoom interview. “There’s no atheists in a foxhole. Nobody is going to worry about deficits.”

Wall Street analysts have debated in recent weeks whether a Trump or Biden victory would be better for stocks. What’s good for bitcoin might be easier to pinpoint, since most digital-asset market analysts say the Federal Reserve’s $3 trillion of freshly printed money this year has helped to push up prices for the largest cryptocurrency.

The upshot? For voters, it’s a choice between Trump and Biden. But bitcoin might be a winner either way.

Bitcoin bulls are taking a breather, having powered gains for the sixth consecutive day on Monday. That’s the longest daily winning run since August 2019.

The momentum is likely to continue as the growing institutional participation highlighted by the payment company Square’s recent $50 million investment in bitcoin has bolstered investor confidence in the cryptocurrency’s long-term prospects.

Technical charts have turned bullish with the cryptocurrency’s convincing move above the Sept. 18 high of $11,200.

Last, open interest in futures listed on major exchanges across the globe has increased by 20% alongside a rally in prices. Futures trading volume also doubled to $14 billion on Monday.

A rise in open interest and volumes alongside an increase in prices is said to validate the uptrend. In other words, the latest bullish move has legs.

“The probability of bitcoin rising to $14,000 from current levels is stronger than the odds of a decline to $10,500,” Patrick Heusser, a senior cryptocurrency trader at Zurich-based Crypto Broker AG told CoinDesk in a Twitter chat.