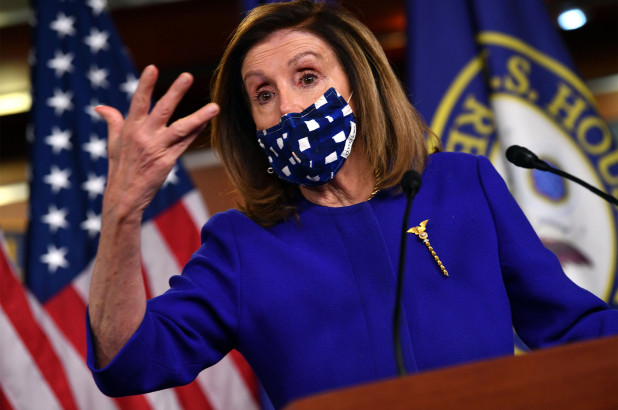 She was responding on ABC’s “The View” to a Trump tweet about the stimulus bill that flashed up on screen.

“What do you think is causing this erratic behavior?” the House speaker was asked.

Perhaps she meant to say “erratic,” but her Freudian slip begs the question: is Nancy Pelosi secretly in love with the president?

She definitely is obsessed with him.

Morning, noon and night, Trump is in her thoughts and on her lips. She brings him up spontaneously in interviews. She talks about his “manhood” and his “fitness” and once called him a “big Humma-Humma.” She quivers at the sound of his name. She frets about his health and claims constantly to “pray” for him. She has confessed he gives her sleepless nights.

Whether or not heartsickness is Pelosi’s ailment, she always finds a way to talk about the younger man.

Perhaps the California Democrat realizes that when you belong to a party that has horsewhipped men into submission, there’s not a lot of alpha male energy to be found. Surrounded by soy boys and pallid milquetoasts, left-wing women often secretly hanker for a Neanderthal macho man in their life.

Clearly, Pelosi, 80, hates Trump now that he dismisses her as “Crazy Nancy” and “a sick puppy,” says her teeth are falling out and refuses to talk to her.

But love and hate are closely intertwined in the human condition. Nothing makes a woman more spiteful than unrequited love.

Pelosi and Trump’s volcanic feud has shades of Anne Shirley and her classmate Gilbert Blythe in “Anne of Green Gables.” Gilbert pulls Anne’s red braids and calls her “Carrots.” She smashes a writing slate over his head, and they don’t speak to each other for years. But secretly you know someone has a crush.

Or perhaps Pelosi sees herself more as the Jane Austen character Elizabeth Bennet in “Pride and Prejudice,” detesting Mr. Darcy with every fiber of her being . . . until her dreams come true and she falls romantically into his arms.

“From the very beginning . . . your arrogance, your conceit, and your selfish disdain of the feelings of others . . . have built so immovable a dislike,” spits Ms. Bennet at the object of her passions.

Slightly less poetically, Pelosi also uses words as weapons: “He’s our president, and I would rather he not be taking something that has not been approved by the scientists, especially in his age group and in his, shall we say, weight group — morbidly obese, they say.”

But she seems to be in denial about the effect he has on her. Even when she was fashioning her strange 25th Amendment legislation she insisted: “This is not about President Trump.”

The lady doth protest too much, methinks.

How else do you account for the extraordinarily emotional and unprofessional way in which Pelosi has carried out her role as speaker of the House?

The nadir was when she ripped up the pages of the president’s State of the Union speech, live on camera, right behind him. Likely it was payback because he had refused to shake hands when he arrived. Or maybe, he just didn’t notice her standing there with her hand outstretched. Even worse to be ignored!

Pelosi simmered and stewed throughout the speech, muttering darkly to herself, before her rage exploded in the unseemly paper-shredding incident.

Get a grip, woman. He’s really not into you.

In 2018, the pair got into a heated quarrel behind closed doors over funding his beloved wall at the southern border.

“It’s like a manhood thing for him,” Pelosi reportedly told colleagues after their spat. “As if manhood could ever be associated with him.”

It wasn’t always so frosty between the pair, when they used to meet at parties in Manhattan.

Back in 2007, when she was sworn in as speaker the first time, Trump sent her a warm note scrawled on a copy of a New York Times article about her: “Nancy — you’re the best. Congrats. Donald.”

He explained to Politico later that he wrote the note because “I met her a number of times and I liked her.”

Pelosi for her part, responded with equal warmth: “I could be helpful to him,” she declared.

A decade later she spoke of Trump’s “charm,” but in wistful fashion.

“Charm, bully, abandon, sue. That’s how @realDonaldTrump deals with problems,” she tweeted in 2017, like a woman scorned.

Somewhere along the line, their mutual regard broke down, but it seems Pelosi cares more about that than Trump, judging by the amount of time she spends talking about him.

Just last month she told Elle magazine: “I don’t even think about him, to tell you the truth.” Yet she brings him up every day.

It could be that she misses their in-person jousting and just wants the president’s attention.

This Friday marks the first anniversary of when Pelosi walked out on a White House meeting with Trump and he accused her of have in a “meltdown.” Maybe they could kiss and make up over a tub of Pelosi’s bougie ice cream.

Back pack or no, Joe?

How much longer can Joe Biden get away with not telling us if he will pack the Supreme Court?

He was asked in his first debate against President Trump if he would pack the court with extra judges, as his colleagues demand, and he refused to answer, even when Trump pressed him repeatedly. “Shut up, man,” was his unedifying answer.

Kamala Harris wouldn’t answer the question, either, when Mike Pence asked her in their vice-presidential debate, although she is a known fan of court-packing. Since then, Biden’s responses have gone from bad to worse.

In Arizona he told reporters: “You’ll know my opinion on court-packing when the election is over.” In Nevada, a reporter asked him: “Don’t the voters deserve to know?” Biden responded again in extraordinarily arrogant fashion: “No they don’t deserve . . . I’m not gonna play his game.”

Presumably, he was talking about Trump. But this isn’t about Trump. It’s about a radical remaking of the third branch of the federal government, permanently politicizing it. Almost 70 percent of Americans are against it, which is why Biden is being coy.

Sensing trouble, his campaign issued a talking point memo on the weekend, farcically re-defining court packing as “depoliticizing.” It’s an exemplar of Democrat obfuscation, which even the Associated Press obligingly followed, as if court packing were in any way equivalent to a president’s lawful right to appoint a new judge to fill a vacancy during his four-year term.

After all the deaths and economic ruin from the 2020 pandemic, Meghan Markle whined from her LA mansion that, actually, 2019 was “almost unsurvivable” because she became the “most-trolled person in the entire world.” Whether or not that’s true, Prince Harry’s pampered wife has revealed a streak of self-engrossed narcissism that they will find hard to live down.

Antifa riots may be part of Democrat power grab: Devine