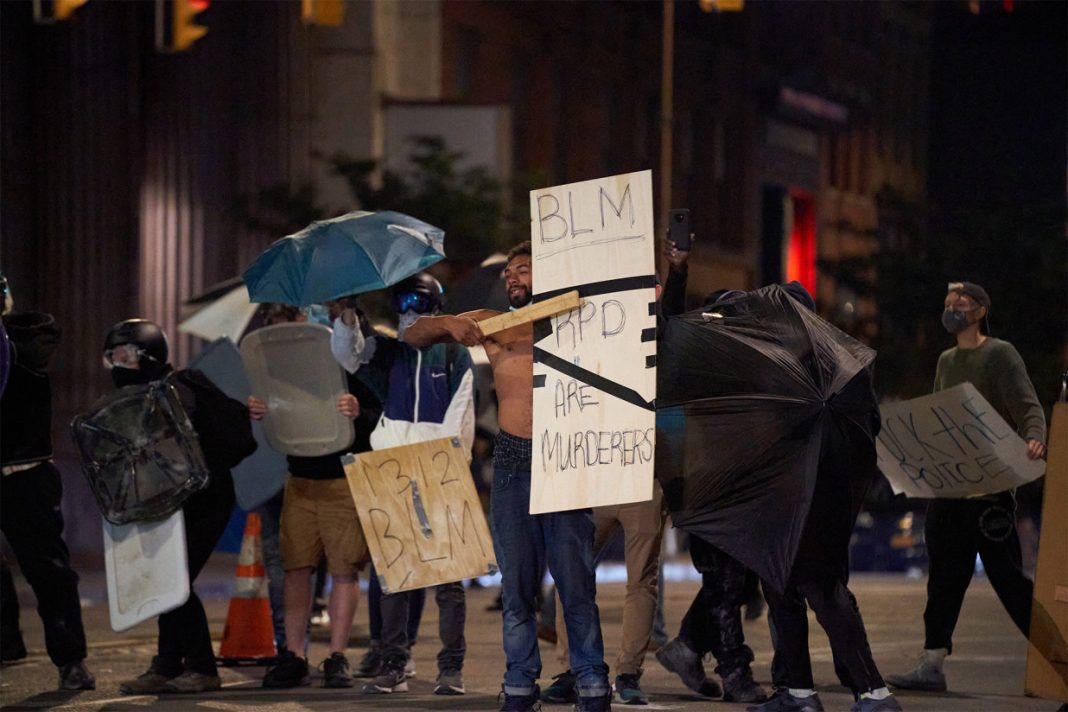 Imagine you were at a restaurant and BLM-Antifa protesters descended on you, threw your food on the ground, broke plates, overturned chairs, tossed a potted plant into your oyster platter and forced you to leave.

That’s what happened in upstate Rochester Friday night at the Ox and Stone, and across the road at Swan Dive, when hundreds of protesters chanting “Black Lives Matter” chased off frightened diners.

“We’re shutting your party down,” a woman shouts in footage aired by FreedomNews TV.

The oyster-platter incident reportedly occurred at Korean steakhouse Cote in the Flatiron district. Protesters brandishing a “Death to America” anarchist banner and chanting “Every city, every town, burn the precinct to the ground,” left a trail of destruction in the city Friday night.

One of those arrested for felony rioting was wealthy Upper East Side college student Clara Kraebber, 20, a member of the Young Democrats.

Whether or not all rioters are Democrat voters, they increasingly are associated with Biden’s campaign in the minds of voters who fear violence is coming to their suburb.

This rolling campaign of anti-police street violence is killing Biden’s bid for the presidency — just look at private polling in crucial swing states such as Michigan, Wisconsin and Pennsylvania, where law and order has become a decisive issue.

So why don’t Democrat leaders do more to condemn the violence and call for calm?

To understand their inaction, you need to step back and see street violence as one element of a coordinated “playbook” to dislodge President Trump, regardless of the outcome of the election.

This is the thesis of political theorist Dr. Darren Beattie, a former Duke University professor and White House official.

The playbook is straight from the strategies the US government has deployed in so-called “Color Revolutions” in Eastern European countries, such as Ukraine or Belarus, to remove “authoritarian” leaders deemed to be hostile to American interests.

In a series of articles at Revolver.news, Beattie lays out a compelling comparison between Deep State efforts to remove President Trump and techniques used by the State Department, covert agencies and allied NGOs to influence, or overturn, elections in foreign countries.

BLM-Antifa’s “mostly peaceful protests” are America’s version of Ukraine’s Orange Revolution, where civil unrest was fomented on the streets to oust a Kremlin-backed authoritarian.

In an interview, Beattie noted “strong parallels” between “color revolutions” overseas and the “sustained coordinated coup against Trump” — from the Russia collusion hoax to his impeachment over Ukraine.

“The very same regime change professionals . . . assigned to overthrow ‘authoritarians’ in Eastern Europe are the ones running this operation against Trump. It is the same playbook run by the same people.”

The Color Revolution playbook starts by creating the narrative of an authoritarian, illegitimate leader. Then you foment unrest on the streets, aimed at provoking an authoritarian crackdown which can be used to mobilize further unrest.

You undermine people’s faith in the election process, setting up a contested outcome which turns into street fighting.

At the same time, you wage relentless “lawfare” to contest ballots. Ultimately the military may be called upon to dislodge the incumbent.

An added twist for America is that Democrats have used the pandemic to institute mass, unsolicited mail-in ballots, which historically are open to fraud and coercion, an experiment which will leave the election result undecided on Nov. 3.

It would be easy to dismiss Beattie’s theory as a wild conspiracy theory, except anti-Trump forces are doing their best to play along.

Take the Transition Integrity Project, a bipartisan war-gaming exercise created by academics, former Clinton and Obama operatives, never-Trumper Republicans, journalists and diplomats, “out of concern that the Trump administration may seek to manipulate, ignore, undermine or disrupt the 2020 presidential election and transition process.”

Project co-founder Rosa Brooks, former special counsel at the George Soros-linked Open Society Foundations in New York, laid out four scenarios for the election: a big Biden win; a narrow Biden win; a period of extended uncertainty as in 2000; and a Trump Electoral College win but popular vote loss, as in 2016.

Only with the scenario in which Biden wins an overwhelming victory is there a “relatively orderly transfer of power,” Brooks wrote last week in The Washington Post.

“Every other scenario we looked at involved street-level violence and political crisis . . . massive disinformation campaigns, violence in the streets and a constitutional impasse.”

Straight out of the Color Revolution playbook.

The aim is to lay the groundwork to reject the election results if Trump wins, with the expectation that he will not concede defeat and will have to be dislodged by military means.

Again, this sounds insane, I know.

But this is the scenario posed by two retired Army officers, John Nagl and Paul Yingling, in a respectable military publication, Defense One, last month. In an open letter to Joint Chiefs of Staff Chairman Gen. Mark Milley, they suggested the 82nd Airborne could be used to remove Trump “by force” from the White House in January.

Hillary Clinton echoed the sentiment: “Biden should not concede under any circumstances.” Biden has said he is “absolutely convinced” the military would “escort” Trump from the White House if he refused to leave office.

The narrative grew so persistent that Gen. Milley felt compelled to issue a letter to Congress declaring the military will not help settle disputes if the election results are contested.

Attorney General Bill Barr warned on CNN last week that the Democrats’ push for unsolicited mail-in ballots is “playing with fire” in our divided country.

To put it mildly.

But, apart from complaining, what is the government going to do about it?

In defense of Assange

Julian Assange’s extradition hearing in London starts this week as he fights espionage charges in the United States.

But if President Trump is considering pardoning Edward Snowden, as he suggests, the case is even stronger to go easy on the Wikileaks founder.

Snowden was an intelligence contractor who leaked information showing the National Security Agency was spying on US citizens during the Bush and Obama administrations.

The leak was in the public interest, but Snowden betrayed his employer.

Assange, on the other hand, merely published the information he received from jailed former US Army intelligence analyst Chelsea Manning.

It was the same when Wikileaks published the DNC ­e-mails that caused such a stir in the 2016 campaign. Dems insisted the Russians hacked the e-mails, while others suggested it was an inside leak.

“Julian has always maintained that the source of the DNC e-mails was not a state actor,” Assange’s mother, Christine, told me Saturday.

Given what we have learned during Russiagate about the compromised state of our intelligence agencies, Assange deserves a medal rather than jail.

It has killed 24,000 New Yorkers, thrown hundreds of thousands out of work and plunged the city into despair.

But Chirlane McCray was relieved when the pandemic erupted because she got a break from her arduous duties as the city’s first lady.

“I think I went from relief from not having to do the regular schedule because you know a lot of what I do, my husband does, we do events,” she said Friday at a virtual event.

How selfish do you have to be to think like that, and how tactless to admit it?

Hey, Chirlane, take a load off. The city would be better off if you and your gormless husband took a permanent break.